As the Democratic primary contest heats up, African American voters will be key in determining who the nominee will be and their relative chances at taking the White House in 2020.  A deeper dive of the preferences of this voting group gives us a better understanding of how the Democratic candidates stack up.

African American voters make up 12.5% of the overall electorate, but constitute approximately 20% of the Democratic base, as they tend to vote exclusively vote Democratic. Just 8% of the African American vote went to President Donald Trump in the 2016 election. As a result, any Democrat running for the presidency must win over this voting bloc.

Underscoring just how important African American voters are in the general election, take a look at their vote break-down in the last two presidential elections.  Even the slightest shifts in African American turnout, up or down, can make or break an election, particularly in swing states.

There’s a legitimate argument to be made that the 2016 presidential election outcome might have been different if African Americans had turned out at similar levels as they did for Obama in 2012.

Now the same is being said of Joe Biden, who has promised to build on Obama’s legacy if he were to win the White House. And polling shows that, indeed, Biden is popular among African American voters.

What this means for the 2020 Election

We’re not at the general election just yet, and much could change in the months to come. We still have the primaries to get through, and past results show that the African American voter effect is especially pronounced in the Democratic primary contest.  If candidates fail to garner support with this key constituency, they have little likelihood of winning the nomination.

For instance, many have noted that former South Bend mayor Pete Buttigieg’s poor polling with African American voters may ultimately shred any chance he has at the nomination.  In contrast, much of Biden’s staying power at the forefront of the polls is attributed to his connection with the African American base.

To understand how the primaries and the general election may play out, we turn to two recent surveys of African American voters — Washington Post/Ipsos and Vice/Ipsos. The data was fascinating. I would highly suggest a deep dive into these polls—there are many nuggets of valuable information in both.

When it comes to electoral potential, both polls confirm much of what we already knew: African Americans strongly support Biden but one of their primary motivations is to vote Trump out of office, so they would ultimately support whatever candidate the Democrats put forward.

But is Biden the only one who can energize this base?

The most striking result from the Vice/Ipsos survey was unexpectedly strong support for Bernie Sanders.  When asked straight up whether they would consider voting for Sanders in the general election, 56% of African American respondents said yes—statistically tied with Biden at 54%. 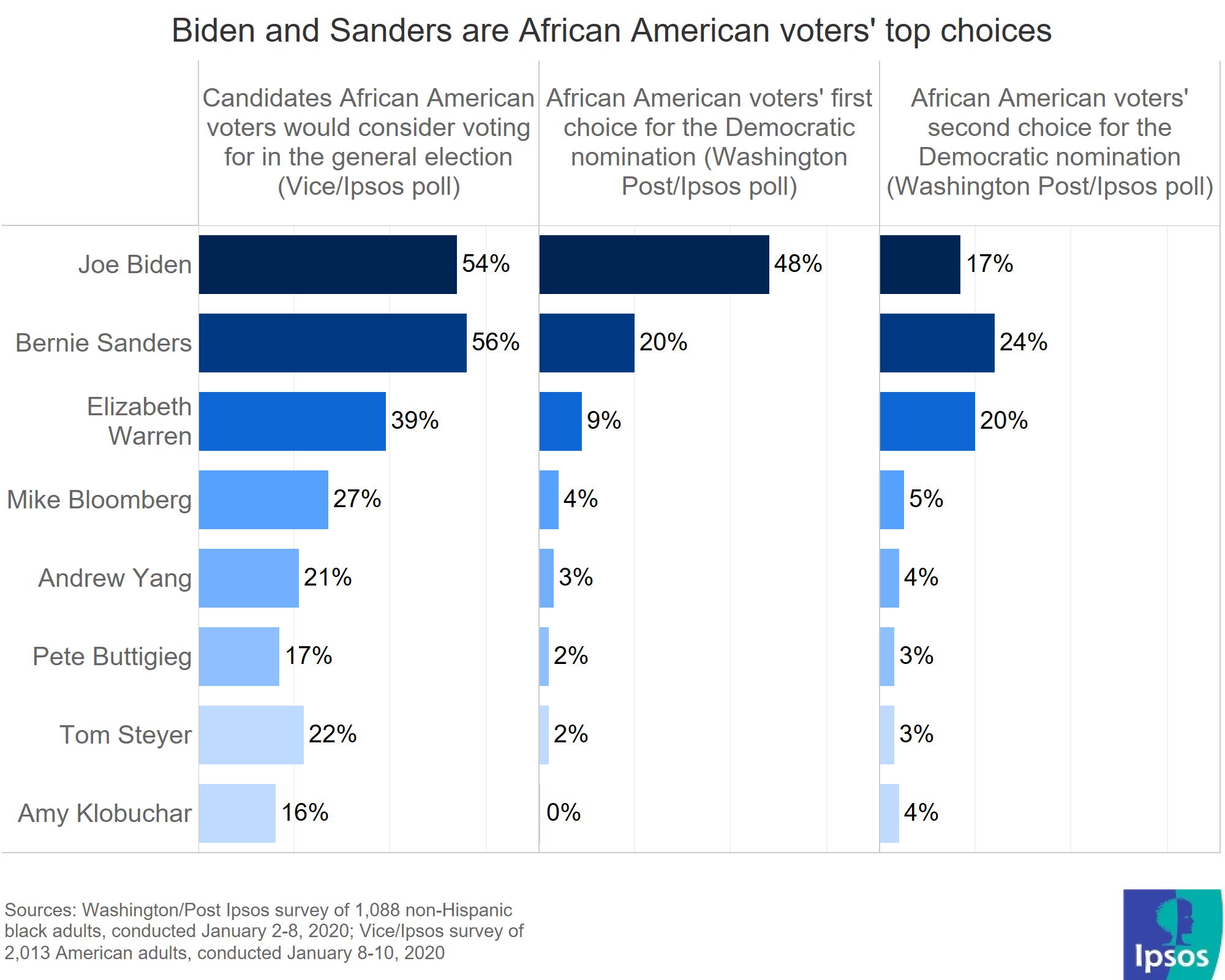 All this suggests that while Biden may be their first choice for the nomination, African American voters would be happy to vote for Sanders in a general election. Again, Sanders is in a strong place with this important political constituency.

I believe the pundits are underestimating Sanders. Of course, nothing is definite yet. Voters can still change their opinions. Yet these findings are important considerations as we look into the future. While Biden has been the talk of the town, Sanders may have more staying power than many initially thought.