This year, people had to rethink core parts of living—grocery shopping, seeing friends and family, how or where to work—to accommodate a virus and all the amorphous risks that go with it. But when people turned to government agencies and political leaders for answers, the response was confusing and often layered with partisan politics.

For starters, nearly all Americans believe that their federal and state government has a role to play in responding to the pandemic. But as the pandemic lingered, Americans’ faith in the government slowly sank. Starting barely above water in the early days of lockdown, trust in the federal government ticked down as the crisis wore on. Now, 37 percent of Americans believe the federal government has the best interests of them and their family in mind, a slight improvement since the election ended, but a notable dip from a March high. At the state and local levels, a similar dynamic is playing out, albeit with higher numbers. 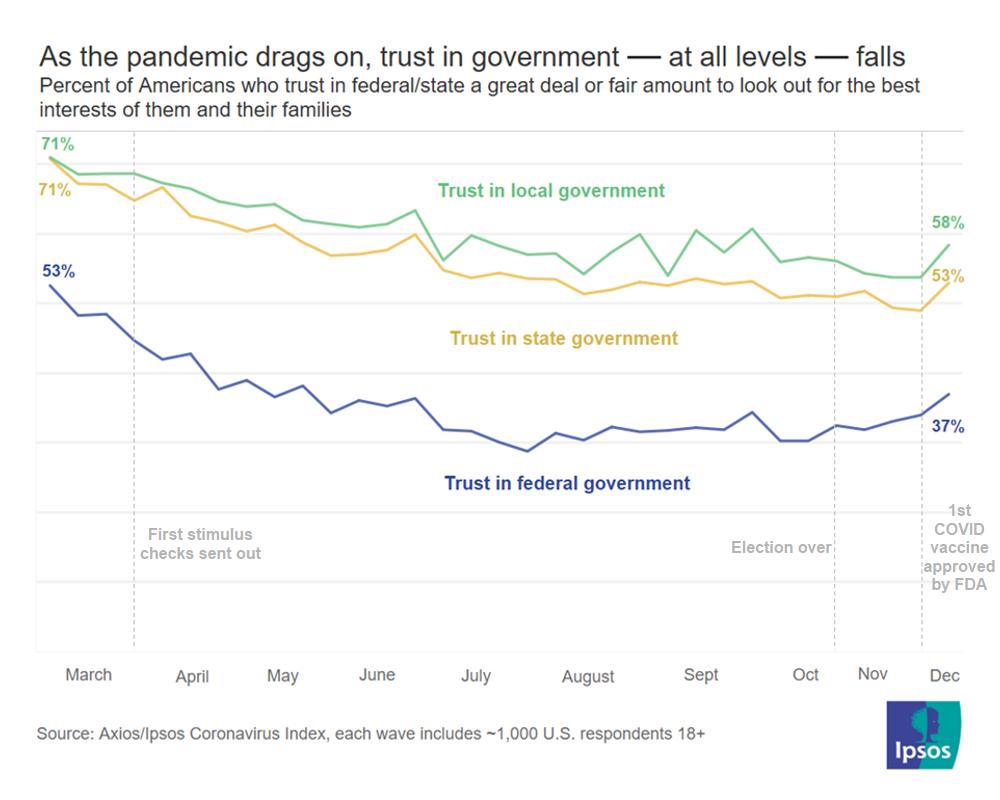 And, this erosion of trust held real-life consequences; over the summer, it diminished people’s willingness to take a coronavirus vaccine. By the middle of September, 42 percent of Americans did not trust the FDA to look out for their best interest.

While trust in the government at all levels declined throughout the pandemic, the shaky relationship between the public and American institutions predates COVID-19, making the overall trend tough to reverse.

But, as Americans continued to lose trust in their institutions this year, they also engaged with the democratic process in many meaningful ways. Roughly 160 million people turned out to vote, a historic high. And, before hitting the ballot box in the fall, millions of Americans showed up to protest. Over the summer, the country witnessed some of the largest and sustained levels of peaceful protest. Millions turned out across every part of the country, in big cities and in small towns, to voice their discontent at racism in the United States. Agitating for change at this level resulted in some notable wins as public sentiment turned towards the Black Lives Matter movement.

There are some other hopeful signs. With two vaccines now approved by the FDA, only about one in three (35%) Americans distrusts the FDA, down eight points from September. Since the end of the election and the positive vaccine news, trust in the local, state, and federal government is incrementally improving.

But, faith in government agencies and institutions remains fragile as 2021 approaches. With public engagement coming off a year of record-breaking highs, will that trust continue to deepen next year?