The gloves were off at Wednesday’s Democratic Debate in Nevada. After a series of comparatively more sedate, decorous debates, the six qualifying candidates were far bolder about sparring with their rivals this time around.

Ipsos followed the proceedings in real time with the Ipsos Twitter tracker, which captures metrics like net sentiment and volume of Twitter mentions about each of the candidates.

These metrics offer some insight into how the Twitterverse felt about the candidates’ performances over the course of the night. That said, Twitter can be an echo chamber and does not necessarily reflect the views of the full electorate.

The main takeaway from the Ipsos Twitter tracker? Last night was the Mike Bloomberg and Elizabeth Warren show. 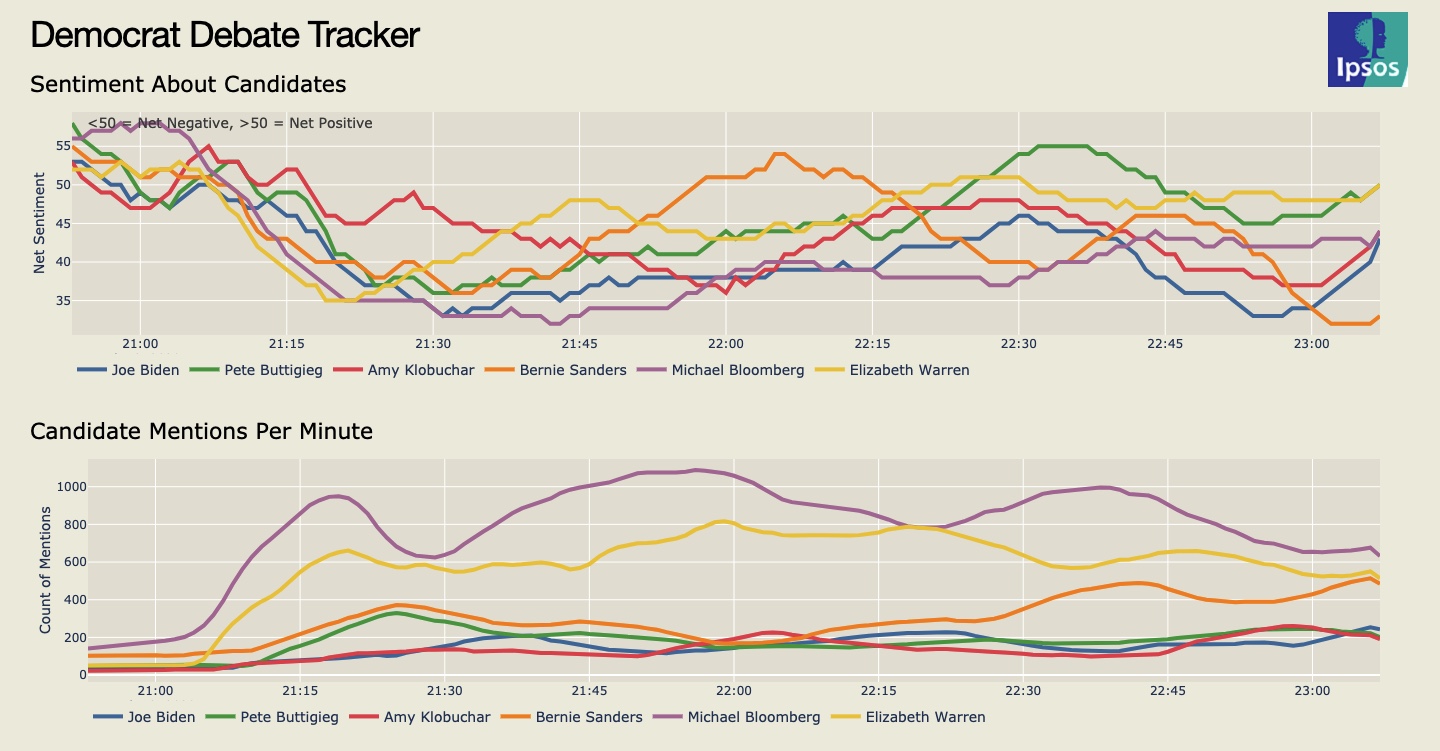 The chart above shows that Bloomberg and Warren got the most attention by far. Bernie Sanders, the current frontrunner coming out of Iowa and New Hampshire, only began to catch up with them towards the end in terms of overall volume.

Minutes into the debate, Warren made it clear that she was not going to go easy on her competitors. Zeroing in on Bloomberg’s complex background – his connection with New York’s notorious Stop and Frisk policy, wealth inequality, and allegations of sexual harassment – she commented, “Democrats take a huge risk if we just substitute one arrogant billionaire for another.”

Throughout the night, she trended towards the middle of the road in terms of net sentiment which, given the sheer volume of mentions about her, was not a bad sign. On the balance, Twitter responded well to this more forthright version of Warren than debate viewers have seen before.

A day later, Twitter is still talking about her. Today, she’s trending under #PresidentElizabethWarren and similar hashtags.

Predictably – given that he’s a controversial figure in a race defined by progressive values – Bloomberg got the most chatter on Twitter. The overall tone about him was negative, in what may be a bad sign for the future of his campaign. 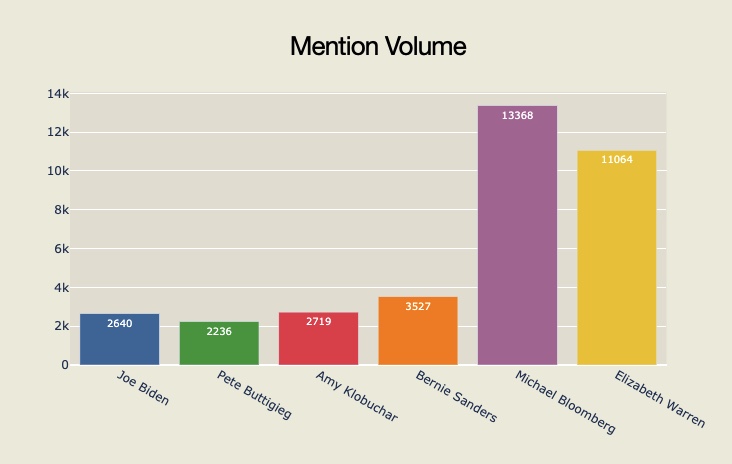 There were plenty of controversial moments in the debate, but the series of tense exchanges between Amy Klobuchar and Pete Buttigieg were particularly remarkable. In past debates, the two tended to hew to their mild Midwesterner personas.

Not this time around.

Buttigieg needled Klobuchar on past gaffes like forgetting the name of the president of Mexico in an interview, while Klobuchar challenged the former South Bend mayor about his lack of experience on Capitol Hill.

On Twitter, Buttigieg may have come out the winner of that particular battle. Twitter reacted more negatively to Klobuchar than Buttigieg over the course of the debate. 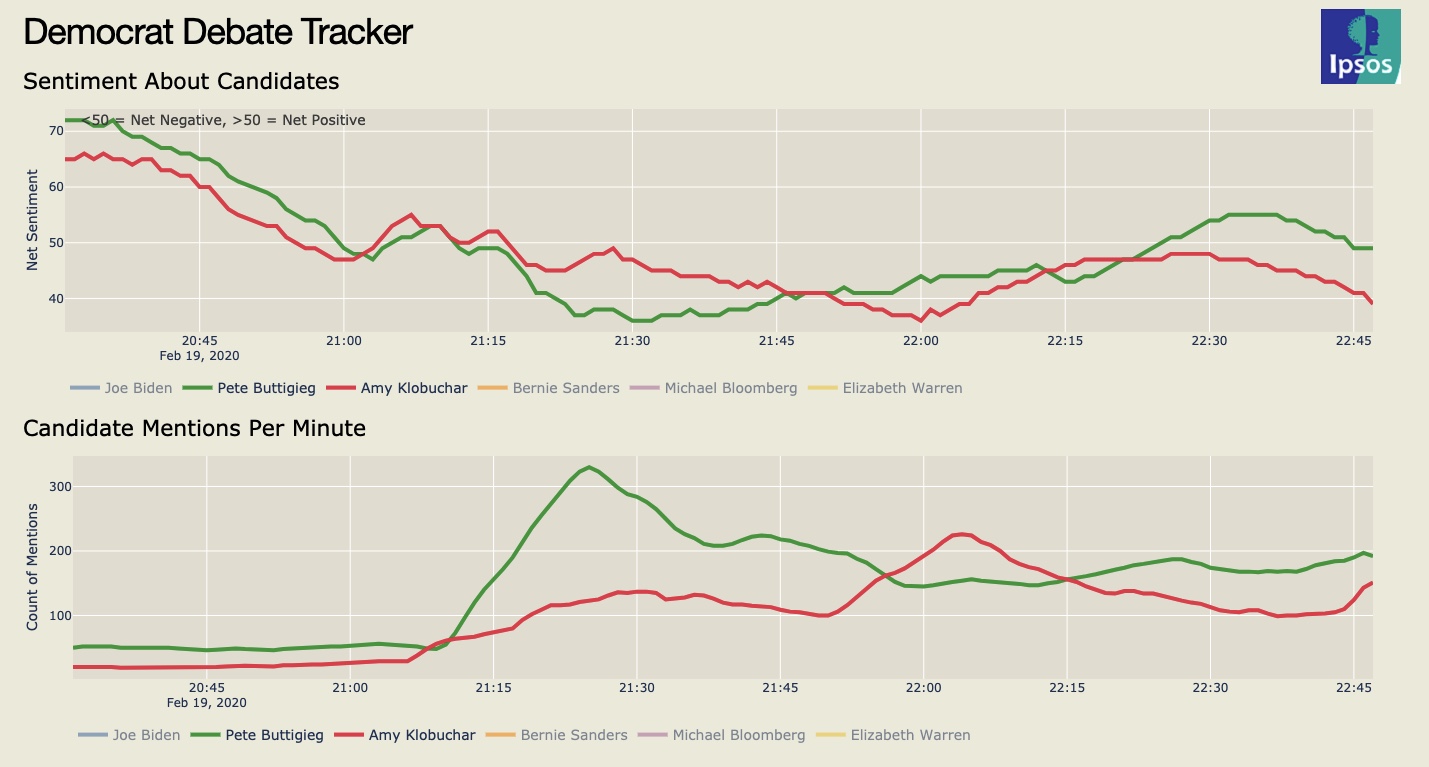 Overall, it was a tense debate reflecting the growing pressure of the campaign.

Though Sanders is in the lead for now, much of the Democratic electorate seems divided. The race could potentially swing in almost any direction if the polls and early results from Iowa and New Hampshire are any indication.

This debate does not seem to have done much to alter Sanders’ current lead. Like Warren, he is trending today under #OnlyBernie. 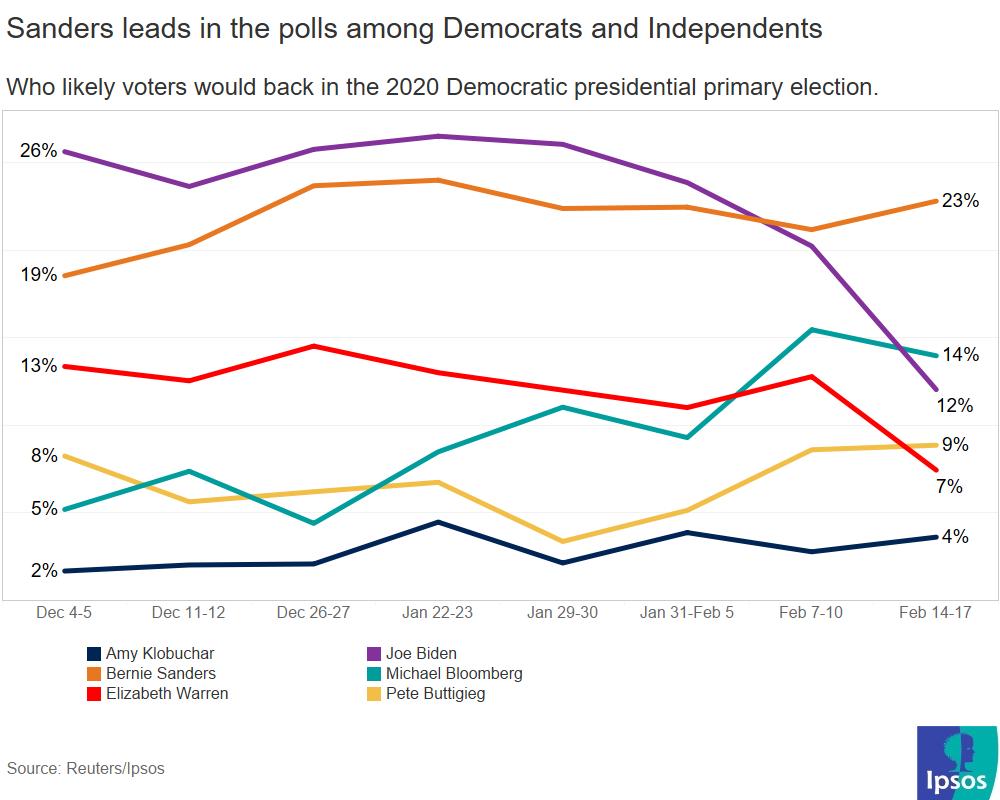 Instead of heading towards clarity, Reuters/Ipsos public opinion polling shows that the majority of Democrats are divided on who to back. Sanders’ consistent, core base is the one exception.

Biden and Warren, who were frontrunners earlier on in the primaries, have dropped in the polls while Buttigieg, Sanders and Bloomberg edged ahead. Early voting results reflects a similar confusion across the party. Klobuchar’s close third place in New Hampshire only underscores how volatile the race could be.

The Nevada caucuses this Saturday will be the next litmus test to see if last night’s debate had any meaningful impact on the candidates’ chances. Warren’s campaign may have benefited the most from the debate, based on what the Ipsos Twitter tracker had to say. It remains to be seen whether the debate meaningfully changed the direction of the race.