Twitter was mesmerized by the confrontation between Senator Elizabeth Warren and Senator Bernie Sanders during last night’s Democratic Debate in Iowa. The pair got the most attention on Twitter by far, though other candidates’ performances – notably former South Bend mayor Pete Buttigieg and Senator Amy Klobuchar – were positively received by Twitterverse.

To gage how well people’s opinions on Twitter match up with the reaction of the broader public to candidates’ performances in Iowa, we turn to post-debate polling from FiveThirtyEight/Ipsos, which shows that the debate did not move the needle much on how likely voters are to consider voting for a given candidate. There are few surprises to be seen in the chart below: former Vice President Joe Biden retains his lead over the field, while Senator Bernie Sanders and Senator Elizabeth Warren remain neck in neck. 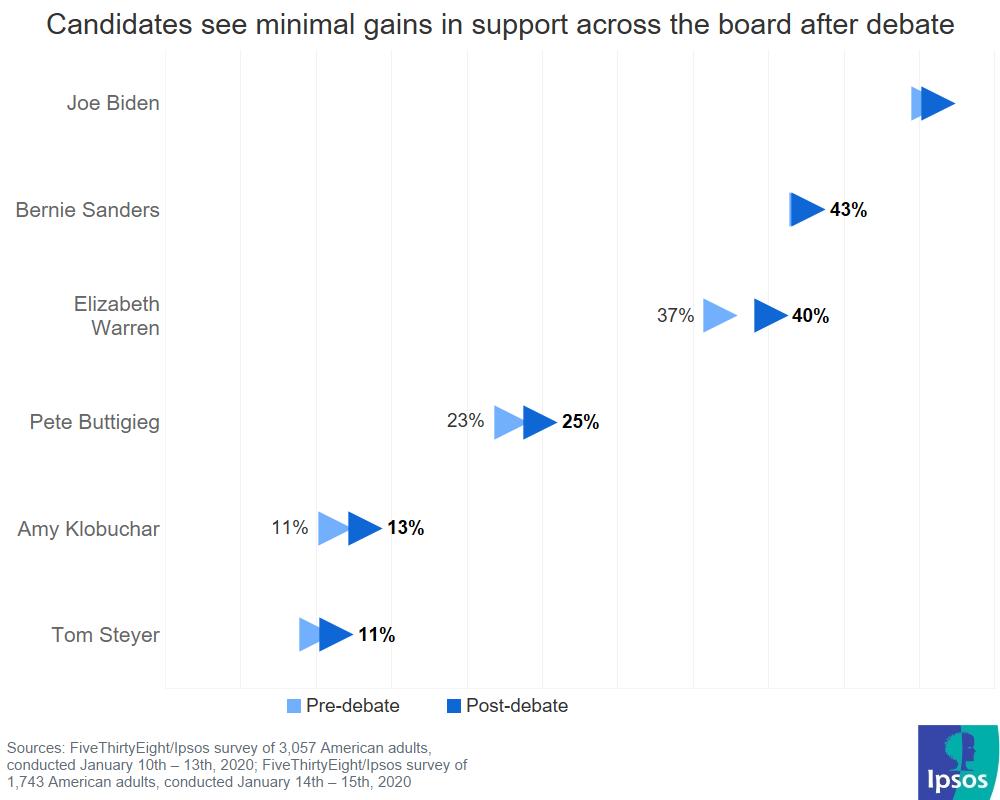 Yet of the 36% of respondents who watched the debate, they were most favorably impressed by Warren, as seen in the chart below. She won over the most debate watchers, with 28% agreeing that she had the best performance of the night, followed by Sanders and Biden. 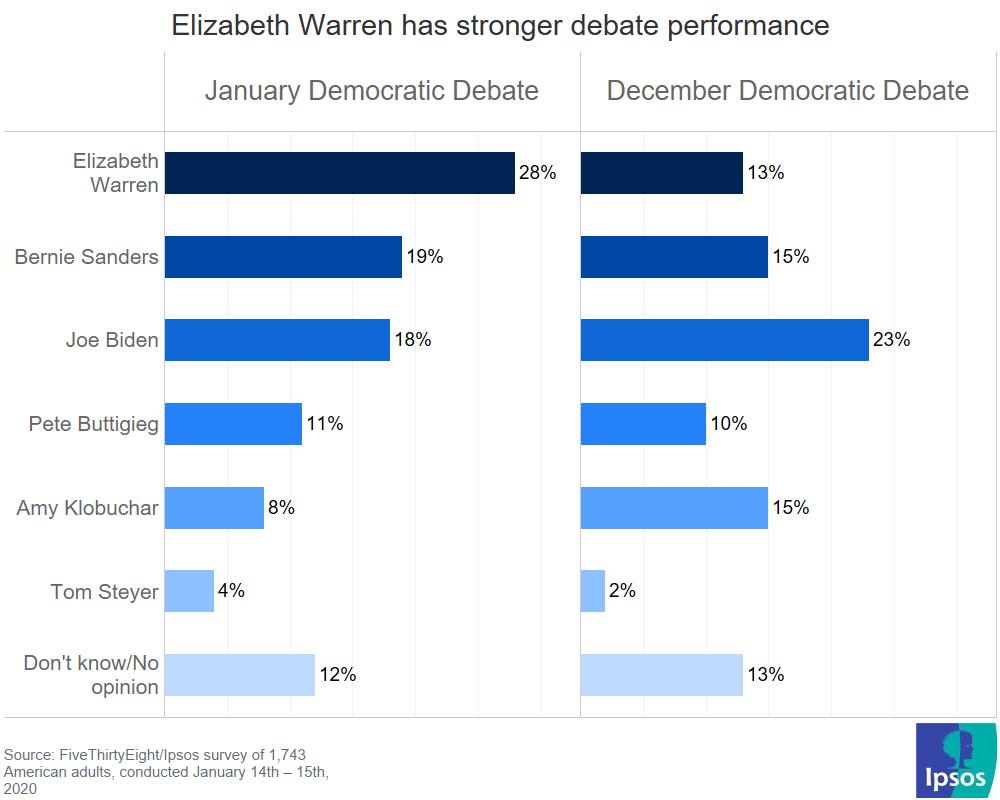 Both Warren and Sanders outperformed their earlier debate ratings, while Biden had the most notable drop off. This tracks with closely with the results from the live Ipsos Twitter tracker, which found that Warren and Sanders garnered the greatest volume of Twitter mentions over the course of the night. They seem to have caught debate watchers’ attention, while Biden did not.

Net sentiment about Warren on Twitter also tended to be more positive than Sanders during the debate. Twitter ended the night with a net positive feeling towards Warren, despite a momentary drop off in positive net sentiment about her after Sanders and Warren’s dust-up on the debate stage regarding whether Sanders told Warren that a woman could never be president in a closed-door meeting in 2018. 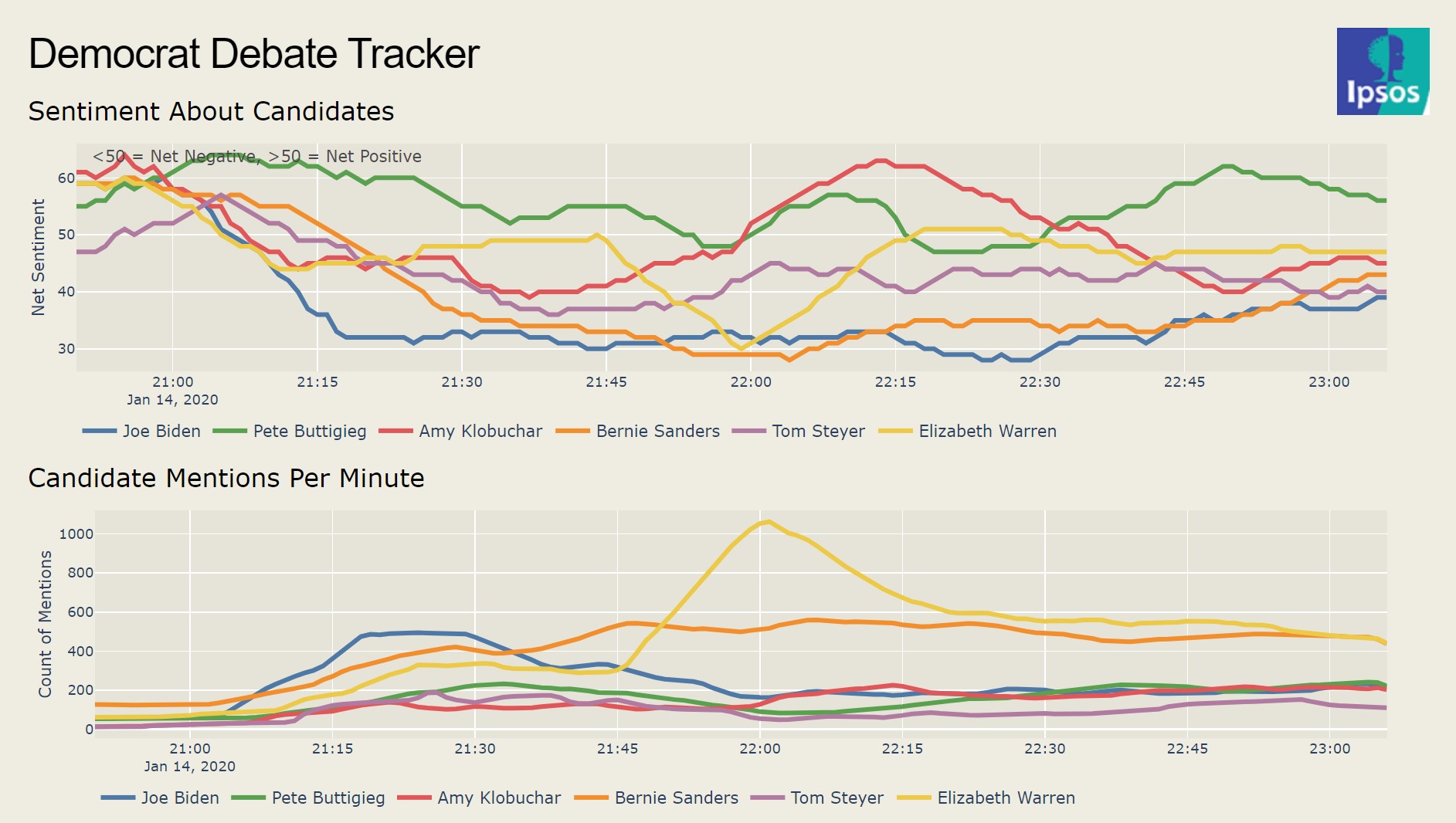 Biden, despite being the national frontrunner in the polls, spoke relatively little compared to other candidates and generated less attention on Twitter than he has in past debates.

What is perhaps most surprising when comparing post-debate polling and the Ipsos live Twitter tracker is that Senator Amy Klobuchar and former South Bend mayor Pete Buttigieg’s debate performances were not rated more highly. On Twitter, the two midwestern candidates tended to generate positive net sentiment over the night.

Finally, businessman Tom Steyer did not generate much buzz on Twitter and was viewed by only 4% of debate watchers to have had the best performance of the night.

Based on the live Ipsos Twitter tracker and FiveThirtyEight/Ipsos polling, Elizabeth Warren appears to have “won” the Iowa debate, followed by Sanders. Though of course, the race is far from settled.