London preserves its spot as the world’s most admired city in the 2022 edition of the Anholt-Ipsos City Brands Index. Paris, Sydney, New York, and Rome round out the top-5, but there has been some movement in the bottom half of the top-10 cities: 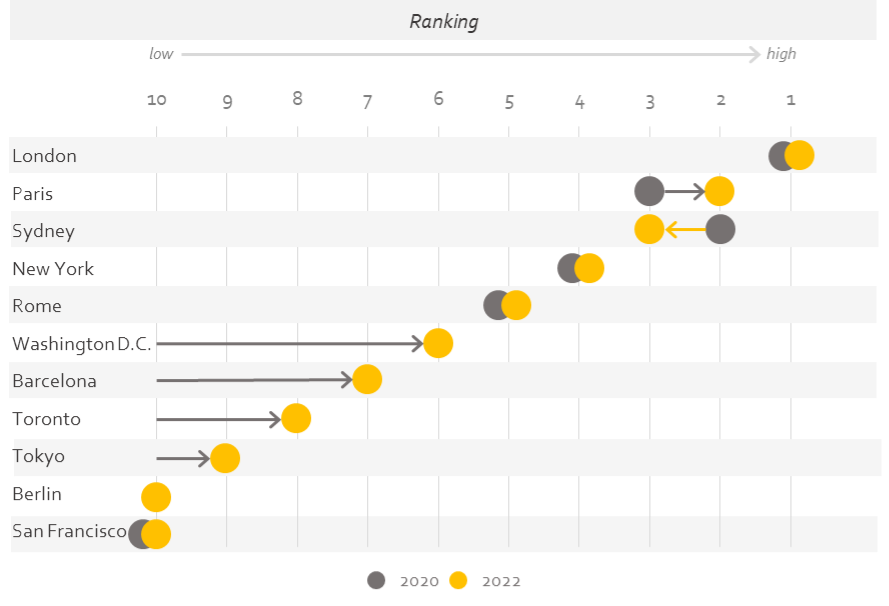 London has the most positive image of any major city worldwide after achieving the top CBI ranking in 2020. London’s reputational strengths come from positive perceptions on the Presence, People, Pulse, and Potential Indices where they earn top-10 marks. Global respondents have the most positive perceptions toward London’s being a good place to get a higher education, ease of finding a job in the city, a city where you are likely to “fit in” and find people who understand and appreciate your culture, and having a good standard of public amenities – all categories where London is the top city in 2022.

Washington D.C. moved into the top-10 this year, coming in sixth-place. Top-5 rankings on the Presence and Potential Indices, as well as relatively steady rankings on Prerequisites, Pulse, and Place help contribute to Washington D.C.’s climb in the rankings.

Barcelona’s seventh place ranking in CBI 2022 is largely driven by top-10 performances on the Place, Pulse, Prerequisites, and People Indices. Barcelona earns 2nd place rankings in the perception of its warm and friendly people and having a pleasant climate.

Toronto and Berlin Improve in Ranking

Toronto and Berlin are two cities with notable climbs in the CBI 2022 rankings. Toronto, which narrowly missed the top-10 in 2020, now sits in eighth place with positive opinions of its Prerequisites, People, and Potential. After also just missing the top-10 in 2020, Berlin improves to tenth (tied with San Francisco) due to top-15 rankings on the Presence and Pulse Indices.

Across all six Indices, the top-5 rankings are mostly occupied from cities in three geographical regions – Europe, North America, and Asia Pacific. Latin American and African / Middle Eastern cities are not among the top-5 on any Index.

The top-5 Presence Index leaders are all top-10 CBI cities – three of which are in the top-5 overall. The top-5 on Presence is also represented by multiple regions – two from Europe (London and Paris), two from North America (New York and Washington D.C.), and one from the Asia Pacific region (Tokyo).

The People Index top-5 is made up of cities across three regions – Asia Pacific (Sydney), North America (Toronto and Vancouver), and Europe (Vienna and London).

All of the top-5 cities on the Pulse Index landed in the top-10 on overall CBI. This index is also made up of cities from three regions – Europe (Paris, London, and Rome), North America (New York), and Asia Pacific (Tokyo).

The final index on the hexagon, Potential, consists of cities from three regions, all of which are a part of the overall top-10. Three North American cities make up the top-5 on Potential (New York, Toronto, and Washington D.C.), one European (London), and one Asia Pacific (Sydney).

Top-10 NBI Nations and their Cities

“After two of the most turbulent years in modern history, the world’s favorite cities are still the same ones as they were in 2020. This reinforces the finding from the Anholt-Ipsos Nation Brands Index that the pandemic has had little impact on our perceptions of the rest of the world: we still admire the same countries and cities, and for the same reasons. The images of places are remarkably resilient, and it’s almost as hard to damage a positive image as it is to improve a negative one.

So city governments worried that the pandemic, or their effectiveness at responding to it, might have damaged their international image and consequently their ability to attract trade, tourism and investment, probably don’t need to worry. With very few exceptions, the pandemic has served to reinforce what people already believed about cities and countries has affected almost all of them equally. Even in cases where the overall image of a country has suffered from the pandemic (as has been the case with China, for example), its cities generally escape damage: Beijing, Hong Kong and Shanghai have suffered far smaller score drops in the CBI than China in the NBI.

The fieldwork for the 2022 CBI was conducted before Russia’s invasion of Ukraine so there has been no change in Moscow’s 31st place: based on previous findings, however, international public opinion is highly intolerant of armed conflict so there’s every reason to expect that Moscow’s position in the next edition will be significantly lower.”