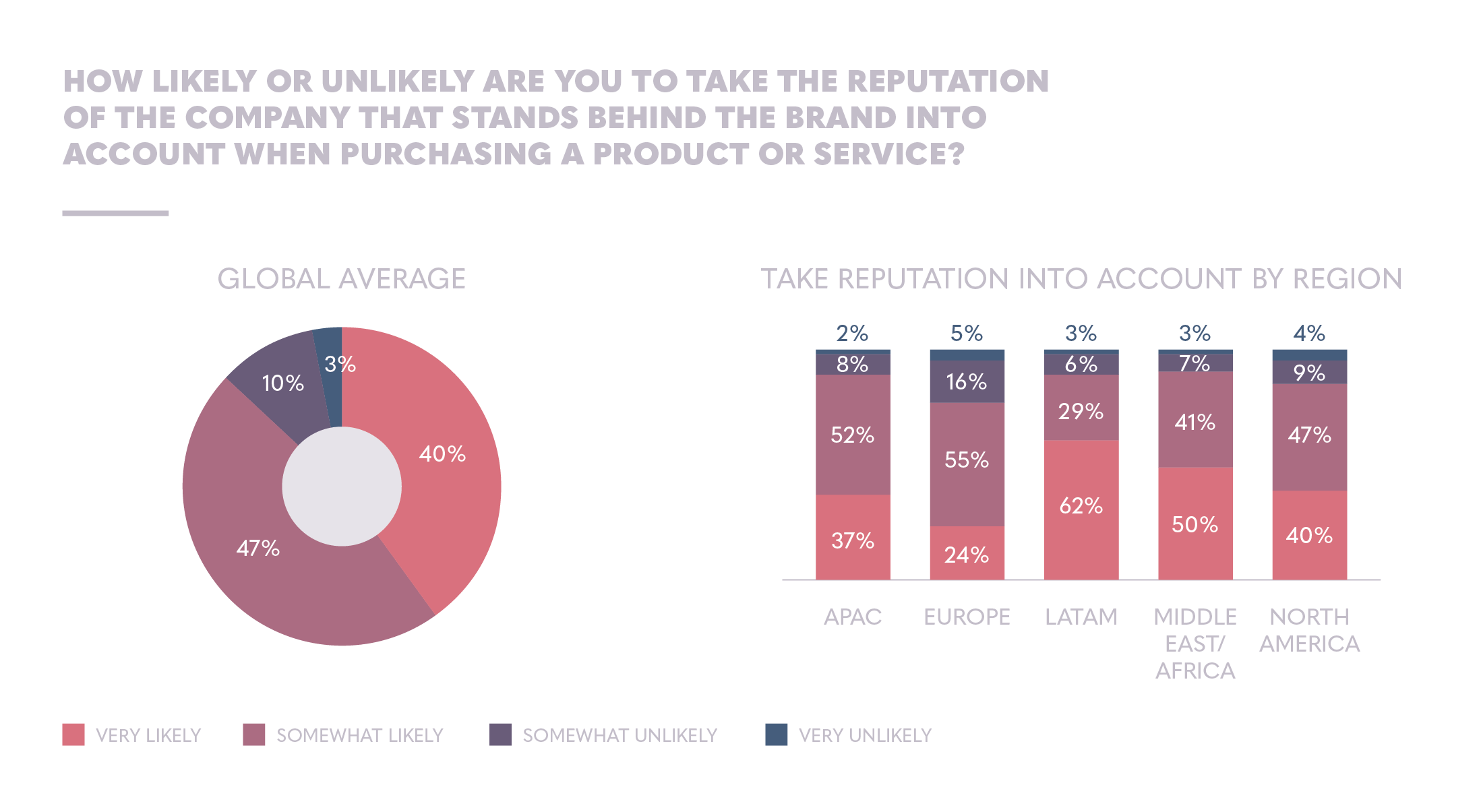 Reputation is a key consideration in purchase decisions.

The vast majority (87%) of consumers around the world say that they take the reputation of the company into account when purchasing a product or service.

There are regional differences in intensity. Consumers in Latin America and the Middle East/Africa are the most likely to say they are “very likely” to take reputation into account.

Building a good reputation generates greater marketing efficiency for companies. When you trust someone, you are more likely to believe what you hear and act on what you’re told. Companies that are trusted gain marketing efficiencies in two ways:

Around the world, trust has an enormous impact on advertising and product use. In advertising, ad believability is impacted much more than ad memorability – so even though people who distrust a company remember the ad, they are much less likely to believe it. The most significant impact on believability comes when people move into active distrust – only 39% believe advertising for companies that they “distrust a little”. This drops to just 18% for companies who are “distrusted a great deal.” People who are “neutral” toward a company on trust, are still likely to believe the ads they see (73%).

Product/service use overall is less impacted by trust. In fact, people who are neutral are the least likely to have ever used a company’s products or services – reflecting the role that experience plays in driving corporate trust. 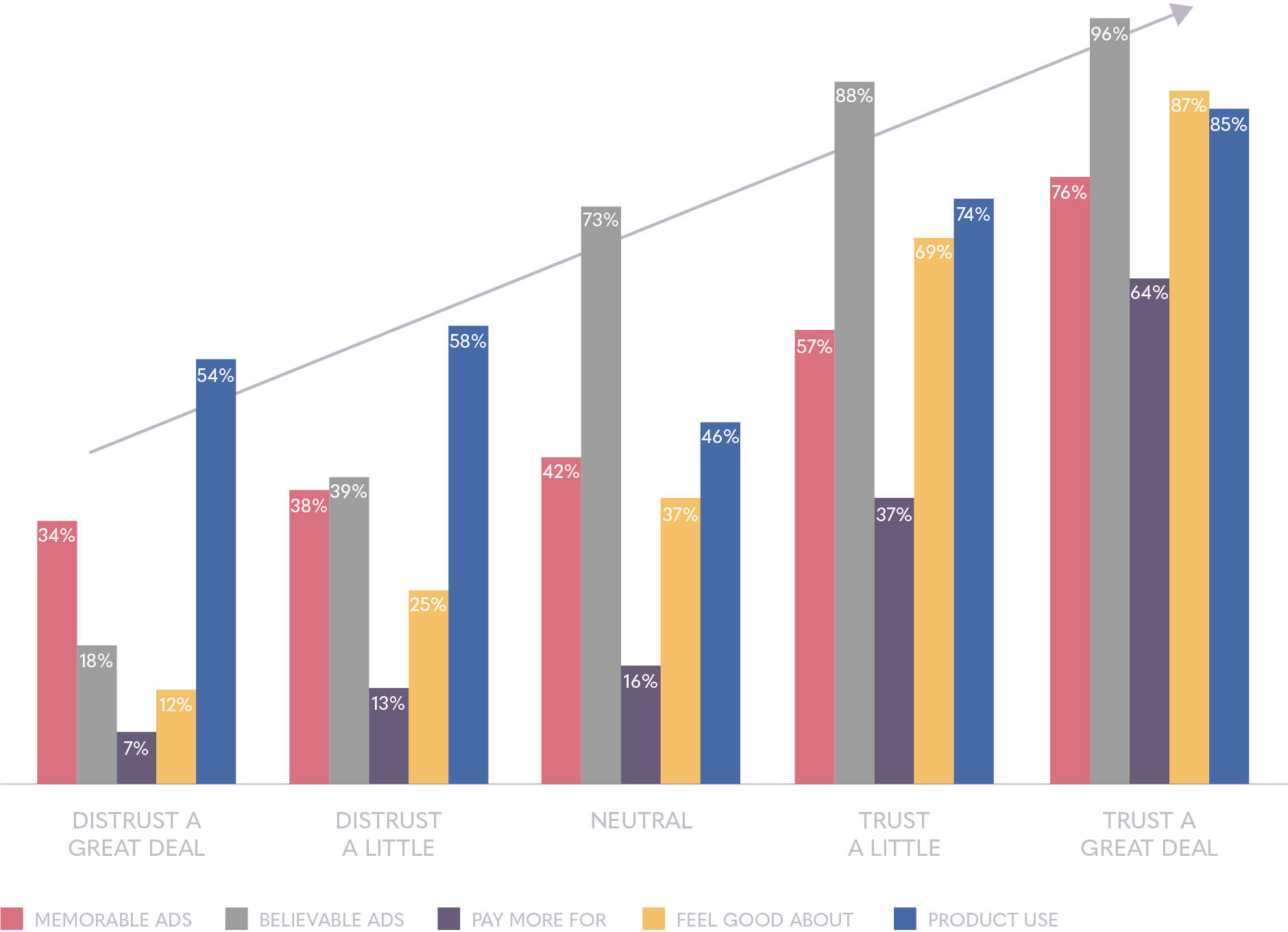 Advertising believability suffers most from active distrust, while willingness to pay a premium benefits the most from active trust. People who are neutral toward a company are willing to believe the ads, but they are unwilling to pay a premium. This suggests that companies that avoid distrust will be able to maintain their marketing efficiency, while those that actively build trust are more likely to reap the profits of premium pricing.

The impact of trust on belief in advertising

Across regions, the steepest decline in advertising believability occurs when people move from “neutral” to “distrust a little.” The decline is greatest in APAC and Europe, but exists in every region.

Among the industry averages, the same inflection point is apparent and holds across industries. Automotive, pharma, and technology advertising are a bit more resilient in the face of distrust.

Maintaining trust, and avoiding active distrust, is important across all companies, everywhere in the world.

Ad believability and trust at the company level

Companies need to understand trust at the individual level.

The impact of trust on advertising believability is not as apparent at the aggregate level as it is at the individual level. 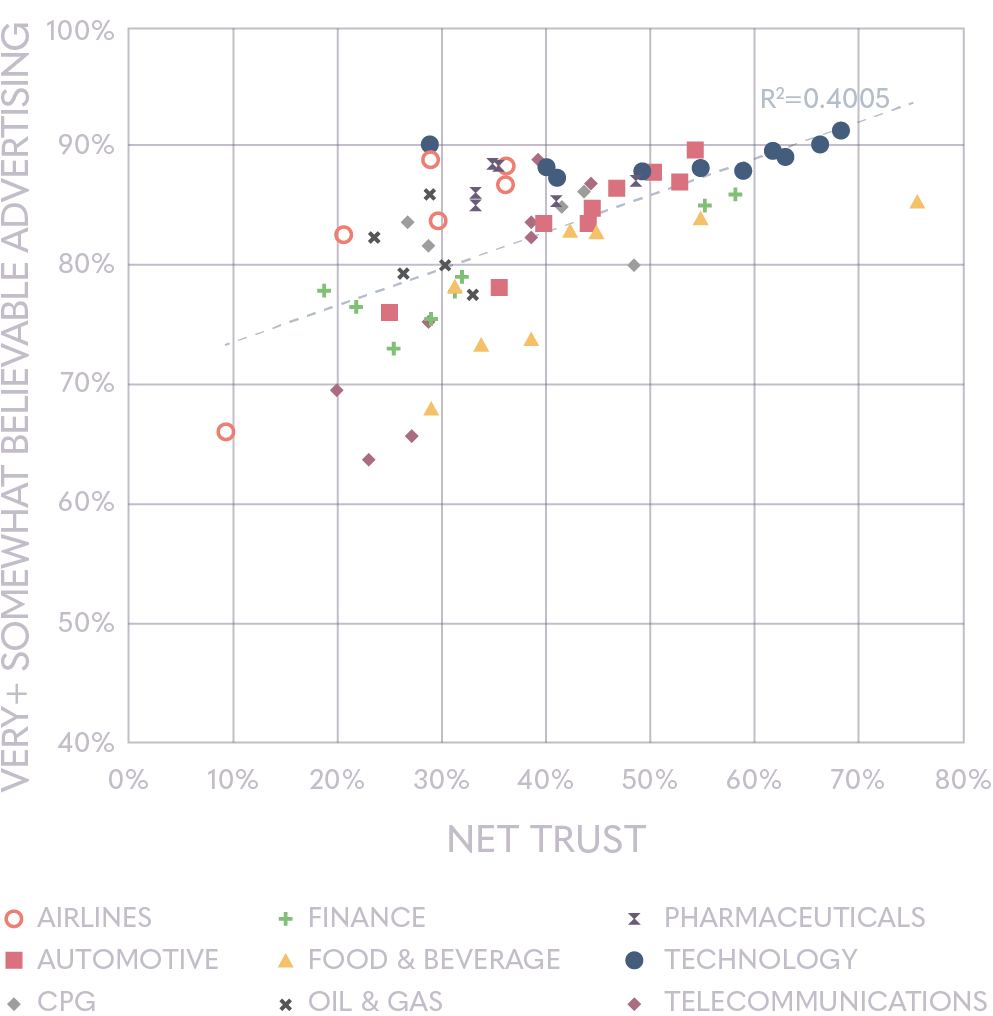 The fact that this effect is somewhat hidden at the aggregate level means that companies need to understand trust at the individual level and be able to target those who distrust the company.

Would you spend more for a product made by a company you trust?

There is a direct relationship between trust and willingness to pay a premium. Companies with high trust can generally command a premium whereas those with low trust need to offer a discount. The impact of trust on willingness to pay remains consistent across regions and industries.

Across industries and regions, the greatest decline in willingness to pay a premium happens between people who trust a company “a little” and those who are “neutral.” The ability to charge a premium depends on actively building trust, rather than just avoiding distrust.

Trust explains 78% of the variance in willingness to pay a premium.

The impact of trust on willingness to pay a premium is more apparent at the aggregate level. 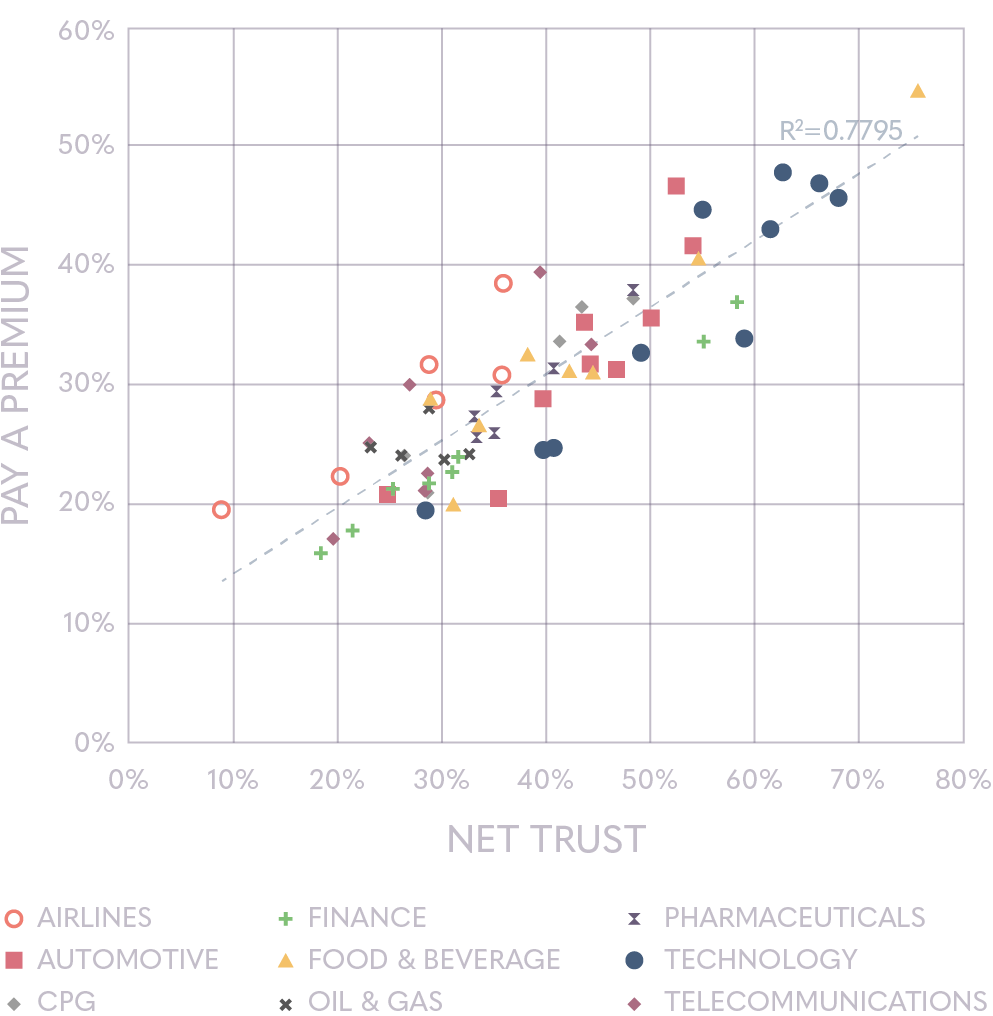 At the aggregate level, trust explains 78% of the variance in willingness to pay a premium. This effect will be magnified when examining individual country results (rather than the global average), and when analyzing at the individual company level.

Methodology: The latest wave of the Ipsos Global Reputation Monitor, conducted in September 2017, measured attitudes of more than 23,000 consumers from 31 countries toward 66 companies across nine industries.