The Anholt-Ipsos Nation Brands Index (NBI) is an annual study that has been conducted since 2008, gathering perceptions of countries around the world. On its 15th anniversary, Germany once again claims first place, continuing its six-year reign at the top. But while 2021 brought strong positive perceptions that many nations benefited from, the 2022 Anholt-Ipsos Nation Brands IndexSM (NBI) is another year of softening scores. The ranking of the top 10 nations has experienced some minor changes since 2021:

“This year’s results remind us that chaos damages countries’ reputations, and stability is rewarded,” says Ipsos CEO Ben Page. “Britain sees itself fall again, now dropping out of the top five for the first time ever. Russia has been punished for its war by global public opinion, dropping from 27th place last year to 58th now. If Germany is an unexciting country to some, overall it remains world number one yet again. In uncertain times, there is something to be said for predictability.” 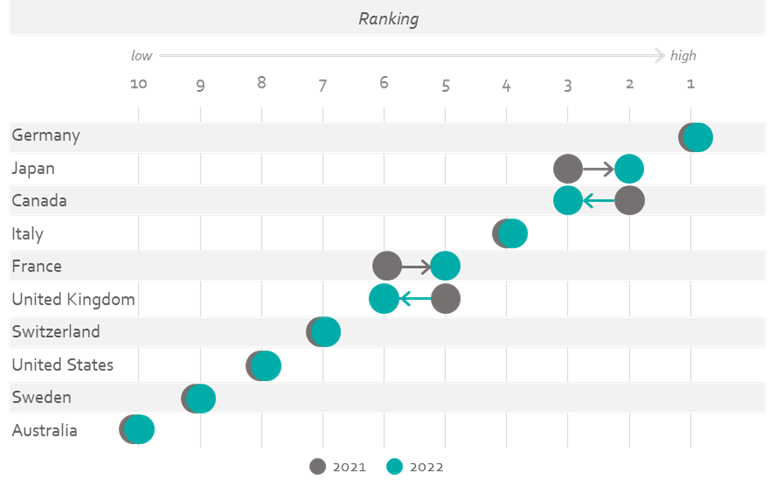 Germany ranks first out of 60 countries on the Nation Brands Index for the eighth time overall and the sixth year in a row. Germany is the highest-ranked NBI nation in 2008, 2014, 2017, 2018, 2019, 2020, 2021, and now 2022. Last year, Germany was tied with the United States for a record of seven years as the number one NBI nation. Germany now holds the record for the longest streak of consecutive first-place rankings. Germany’s reputational strengths continue to come from the Exports, Immigration & Investment, and Culture indices. In 2022, there are particularly positive opinions on feeling good about buying German products, the employability of German people, German sports, and the appeal of investing in German business — all attributes in which it ranks in the top two.

After breaking the top two for the first time in 2021, Canada is back in third place. Canada drops in the rankings on Governance, where it once held a first-place ranking. However, it is still the top nation on the People and Immigration and Investment Indices. Japan’s robust ratings on the Exports, Tourism, and Culture Indices helped it climb to the second spot on the overall NBI.

While the United Kingdom remains a constant in the NBI’s top 10, for the first time in NBI history it falls out of the top five. The UK is reputationally sound on the Culture, Exports, and Immigration and Investment indices, and is rated particularly positively regarding its contemporary culture, science and technology, feeling good about buying products from the UK, and educational qualifications. However, the United Kingdom sees weaknesses on the People and Governance indices, where it received lower marks on the welcoming nature of its people and having a competent and honest government 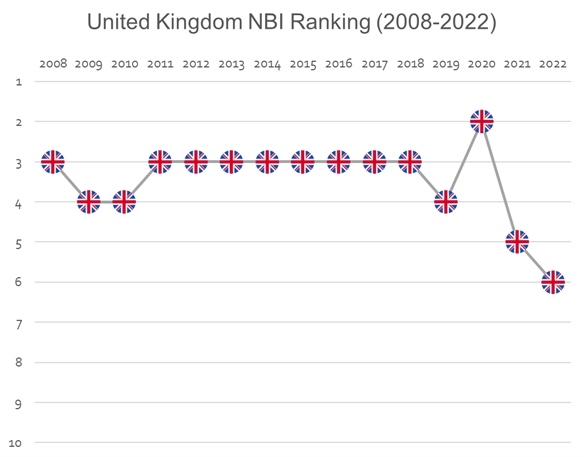 Italy (#4), Switzerland (#7), the United States (#8), Sweden (#9), and Australia (#10) all retain their top-10 rankings from 2021, despite above-average declines in score. Switzerland, Sweden, and Australia receive high marks on their Governance, People, and Immigration and Investment, while Italy holds first-place rankings on Culture and Tourism. The United States’ strengths lie on the Exports index.

In 2021, Russia ranked 27th, with reputational strengths on the Culture, Exports, and Tourism indices. However, in 2022, Russia sees sharp decreases across the board. Russia’s 58th place rank is attributed to the declining favorability of its Governance, Immigration and Investment, and People —particularly when it comes to peace and security, willingness to work and live in Russia for a substantial period of time, and the welcoming nature of its people.

"As Russia’s image falls by an unprecedented 31 places in the 2022 Nation Brands Index, here is further evidence that humanity simply will not tolerate conflict in the twenty-first century," says Simon Anholt. "A collapse of this magnitude in a country’s national standing will cripple the ability of its companies, its government and above all its people to trade and engage with the international community. It will do so more effectively than any economic sanctions, for years, if not for generations to come."

Desire to visit and invest decrease

Another longitudinal analysis of 50 Nation Brands Index (NBI) countries between 2015 and 2020, and 60 measured nations from 2021-2022, demonstrates changes to the appeal of investing in other countries’ businesses over time. Two sharp declines have occurred over the last eight years: 2020 and 2022. In 2020, economies globally saw the effects of the COVID-19 pandemic, which may have impacted the appeal of investing in businesses during a time of uncertainty, before rebounding to its highest rate in 2021.

The rebound was short-lived, as in 2022, inflation rates have risen globally to rates unseen in years. As such, respondents may be timid toward investing in businesses worldwide. Overall, most nation brands see a decline in investment appeal since 2021.

All 60 NBI nation scores and rankings

As with 2021, the full list of nation rankings and scores are published to provide sufficient context for potential movement within the measured country list.

The Anholt-Ipsos Nation Brands Index (NBI) collects over 60,000 interviews online in 20 panel countries with adults aged 18 or over each year. Data are weighted to reflect key demographic characteristics including age and gender. Fieldwork was conducted from July through August.

The nations measured in 2022 are as follows, listed by region:

Simon Anholt designed and launched the Nation Brands Index in 2005. Since 1998, he has advised the presidents, prime ministers and governments of 63 countries, helping them to engage more imaginatively and effectively with the international community. He is recognized as the world’s leading authority on national image. Professor Anholt also publishes the Good Country Index, a survey that ranks countries on their contribution to humanity and the planet, and is Founder-Editor Emeritus of the Journal of Place Branding and Public Diplomacy. He was previously Vice-Chair of the UK Foreign Office Public Diplomacy Board. Anholt’s TED talk launching the Good Country Index has received 12 million views, and is the all- time most viewed TED talk on ‘governance’. He has written six books about countries, cultures and globalization and is an honorary Professor of Political Science at the University of East Anglia. His latest book, The Good Country Equation, was published in August 2020.