As the Government prepares to ease Britain out of lockdown on Saturday, a new poll from Ipsos MORI finds that many are still uncomfortable about some aspects of life returning to normal. Updating our polling from mid-May reveals that three in five (60%) still say they would be uncomfortable going to a bar or restaurant (unchanged since May). The majority of Britons would also be uncomfortable attending large public gatherings (65%), using public toilets (62%), taking holidays abroad (57%), visiting indoor cinemas or theatres (59%), using public transport (59%), or going to indoor gyms/leisure centres of swimming pools (55%). 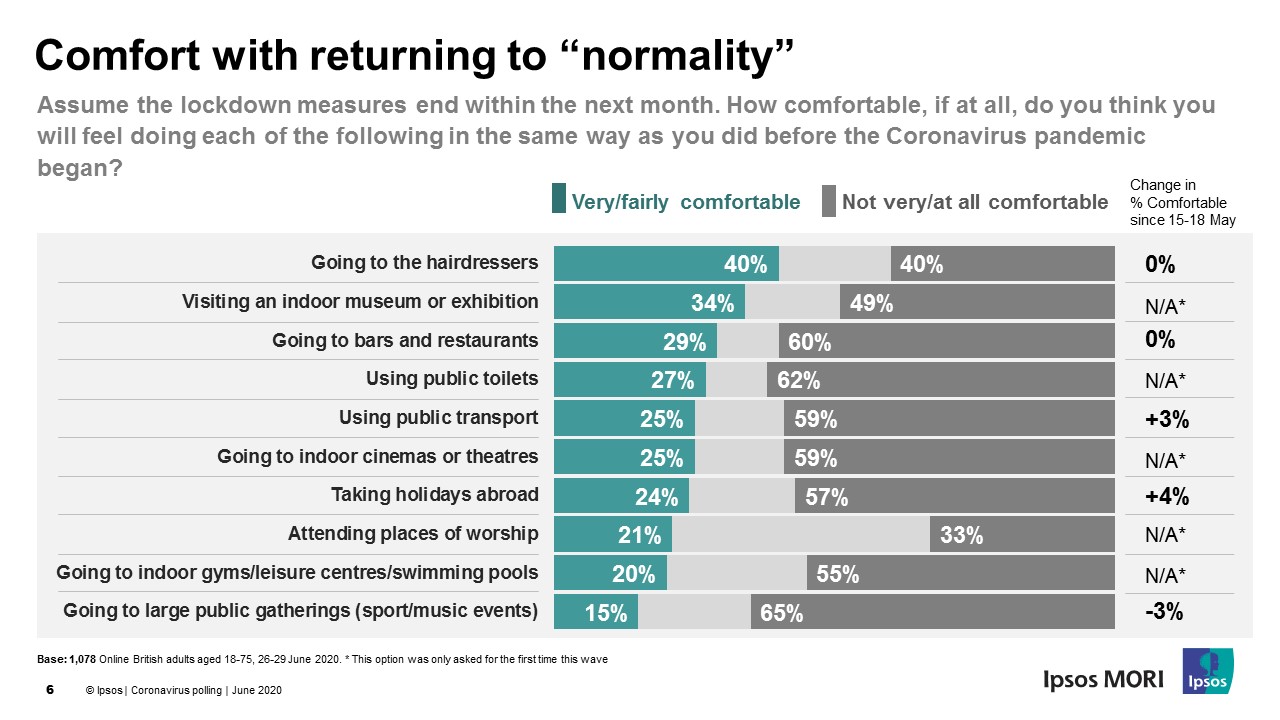 Similarly, the majority of Britons would also be comfortable going to their GP for non-coronavirus issues (58%), shopping in supermarkets (55%) or other shops (51%) and staying overnight in the house of a friend of family member (50%) – most of these figures are unchanged since May where they were asked. 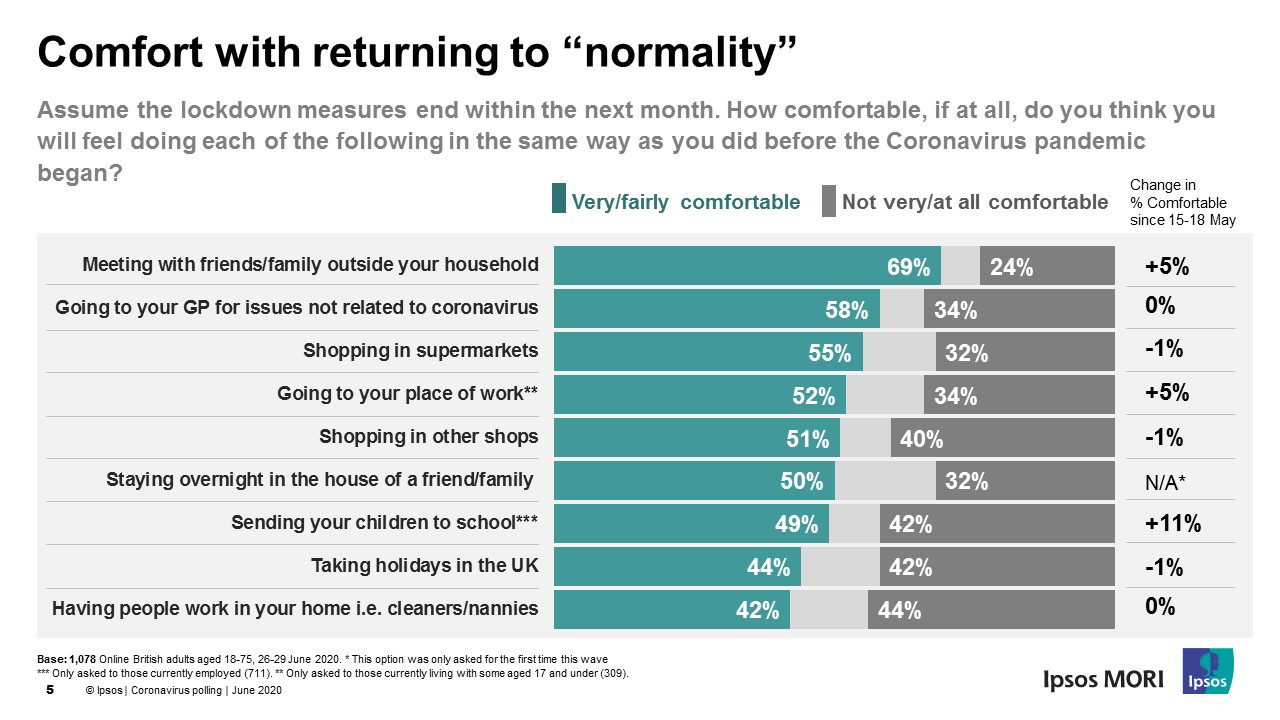 Concern about the Coronavirus

Apprehension about going back to life as usual coincides with a rise in concern about the risk that coronavirus poses to both people personally and the country: 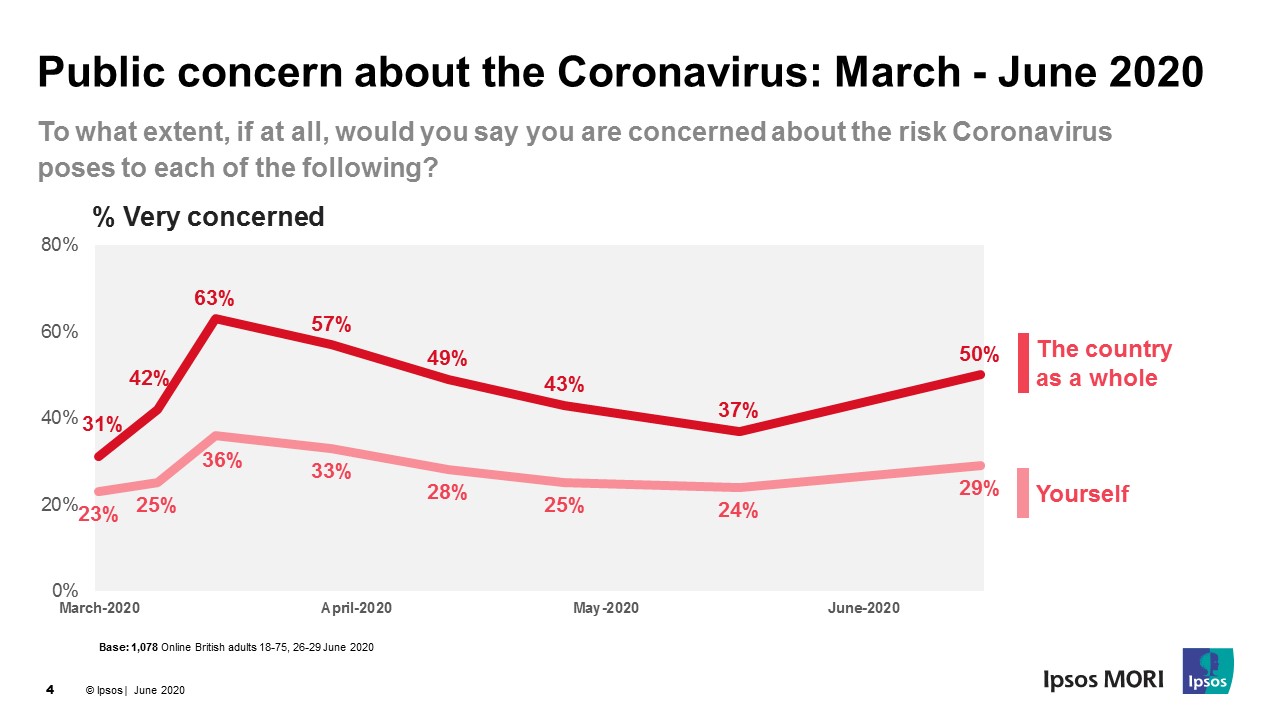 After a period of declining concern, events of the last few weeks seem to have shifted public worries about the coronavirus back up again – although concern for the country remains much higher than perceptions of its risk to people personally. Significant numbers of Britons also remain anxious about many aspects of life returning to normal, particularly where these are in enclosed spaces or with large groups of other people. However, there is some returning optimism, with signs that attitudes are becoming more open towards seeing friends and family, returning to work or sending children back to school.

Ipsos MORI interviewed a representative sample of 1,078 British adults aged 18-75. Interviews were conducted online from 26-29 June 2020. Data are weighted to match the profile of the population. All polls are subject to a wide range of potential sources of error.