The survey tests public perceptions against the recent government-commissioned Migration Advisory Committee (MAC) report. Only 29% of the public correctly think that immigrants from European countries pay £4.7bn more in taxes than they receive in welfare benefits and services. 56% of the public and 75% of Leave supporters think that European immigration has increased crime levels, when evidence from the MAC report finds no link. When referring to the claim that the UK sends £350m a week to the EU, two-thirds of the public (67%) have heard of the claim and 42% of these believe it is true, despite it being labelled a “misuse of statistics” by the UK Statistics Authority. 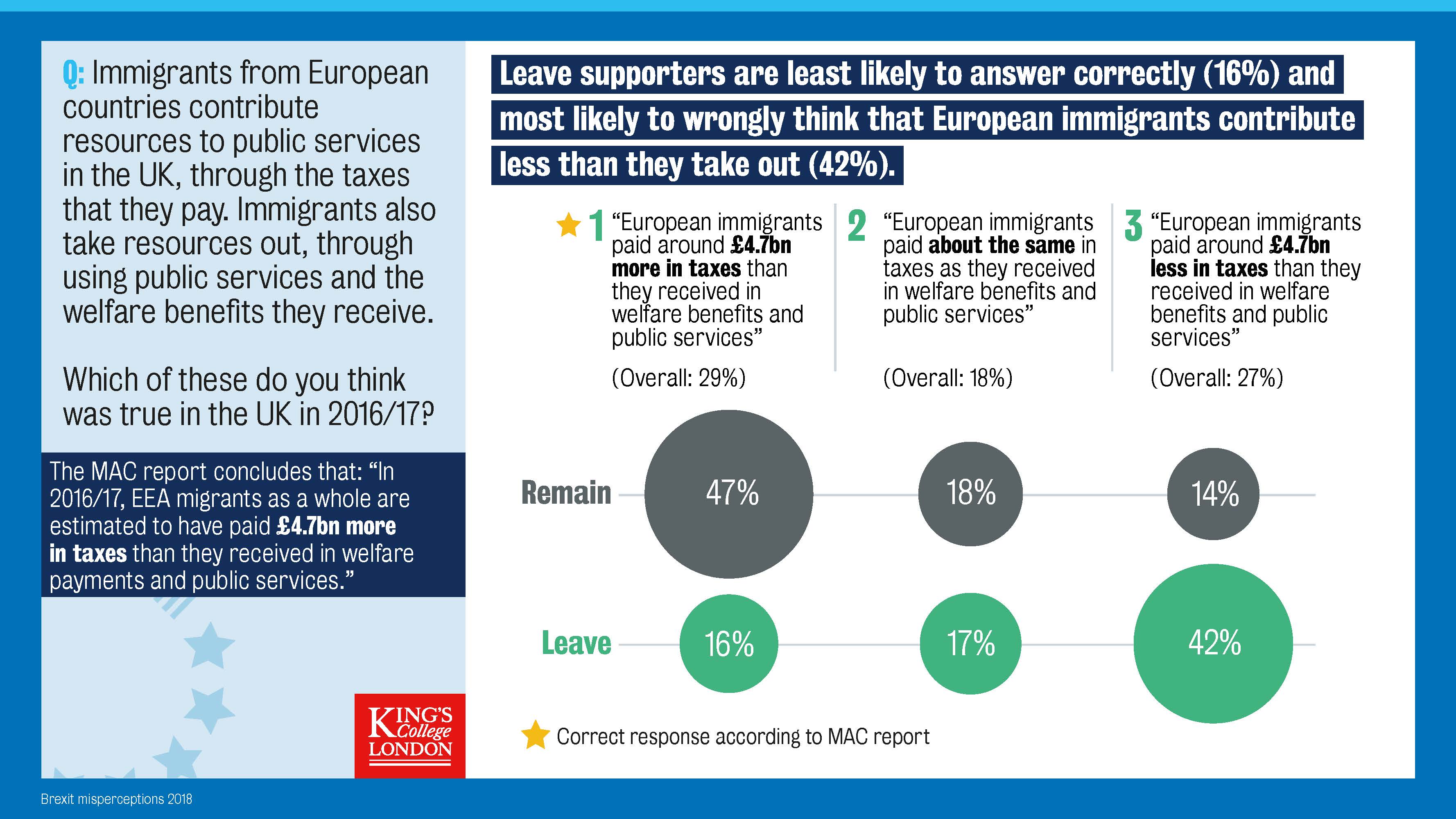 Over three-quarters (78%, up from 70% last month) say they lack confidence in Theresa May to get a good deal for Britain in negotiations with other European Union in the latest Ipsos MORI Political Monitor. Only one in five do have confidence in the Prime Minister (19%, down from 28%). As uncertainty continues with the negotiations the Ipsos MORI Economic Optimism Index (EOI) also shows persisting pessimism around Britain’s economy. Three in five (61%) say they think the economy will get worse in the next year (up 2 points) and 14% think it will improve (down 1 point). The EOI score of -47 is the lowest since December 2011.

Ahead of Phillip Hammond's budget this week, 66% want to see the Government increase public spending, according to the latest Political Monitor, even if that means higher taxes or more government borrowing.  Despite the majority of the public wanting the government to increase spending on public services only a quarter (24% - including 26% of Conservative supporters) think the government will actually do it. 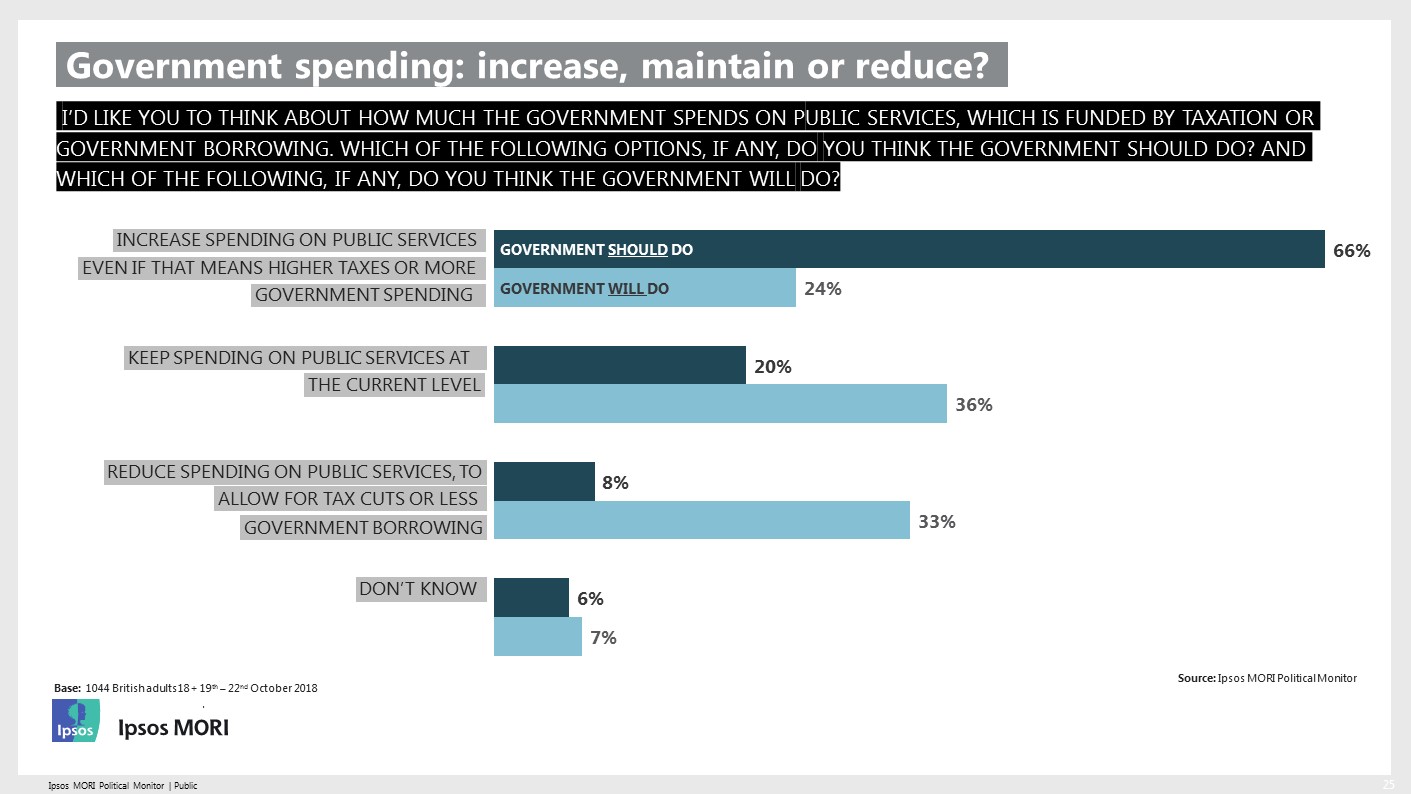 44% of UK adults expect the UK to leave the EU without a deal in place, 29% expect us to leave with a deal and 7% think we will not leave the EU in March 2019. When asked about the impact of Brexit on everyday life, only 14% of the public expect Brexit to increase their own standard of living in the next five years, with 31% expecting their standard of living to decrease. Three in ten (29%) expect unemployment to increase over the next five years as a result of leaving the EU and six in ten people (60%) overall and the majority in just about every group expect immigration from the EU to decrease once we’ve left.

Half see Brexit as the single biggest issue for Britain

What worries the world? September 2018

60% of people across the 28 countries think that their country is on the wrong track, in particular Brazil, Spain, South Africa, France have the greatest apprehension about the direction taken by their country.

The four major worries for global citizens are:

Healthcare (38%) is the most mentioned concern for the British public for the eleventh consecutive month, followed by crime & violence (32%) which is still the joint second greatest concern with no change from the previous month and only just shy from the highest figure recorded since 2012.

We’re always told the importance of making a good first impression. Studies in social psychology have found that, on average, we judge someone within the first seven seconds of meeting them.

But, what about last impressions? Last impressions also count argues that our memories are governed just as much by how an experience ends, as how it begins. Here we explore the question, do last impressions matter for advertising to be easily retrievable in memory and influence brand choice?

You can watch the animation of the Evaluation of the Community Learning Mental Health Research Project on the project to understand how adult and community learning courses can help people manage and recover from mild to moderate mental health problems, such as anxiety and depression.

Energy sector reputations: time to power up? Robert Knight reflects on the image problem of the energy sector. Despite our reliance on their products and services, every day energy companies – from domestic suppliers to international oil and gas companies – are facing an uphill struggle to be viewed in a more positive light by a wide range of their stakeholders.

As ever please do let us know what you think and I hope you find something to interest you.