In a new online survey by Ipsos MORI, 88% of Britons believe that one year from now their economy will have changed as a result of the coronavirus pandemic, and half (49%) think it will change a great deal. Following a mass move to working from home for those able to do so, three-quarters also expect to see a shift in the way we work, only 1 in 5 (22%) of Britons anticipate little or no change in their working habits. The survey, conducted online among British adults aged 18-75 this weekend, found another three-quarters expect the way we live our lives to change – one in four say a great deal. 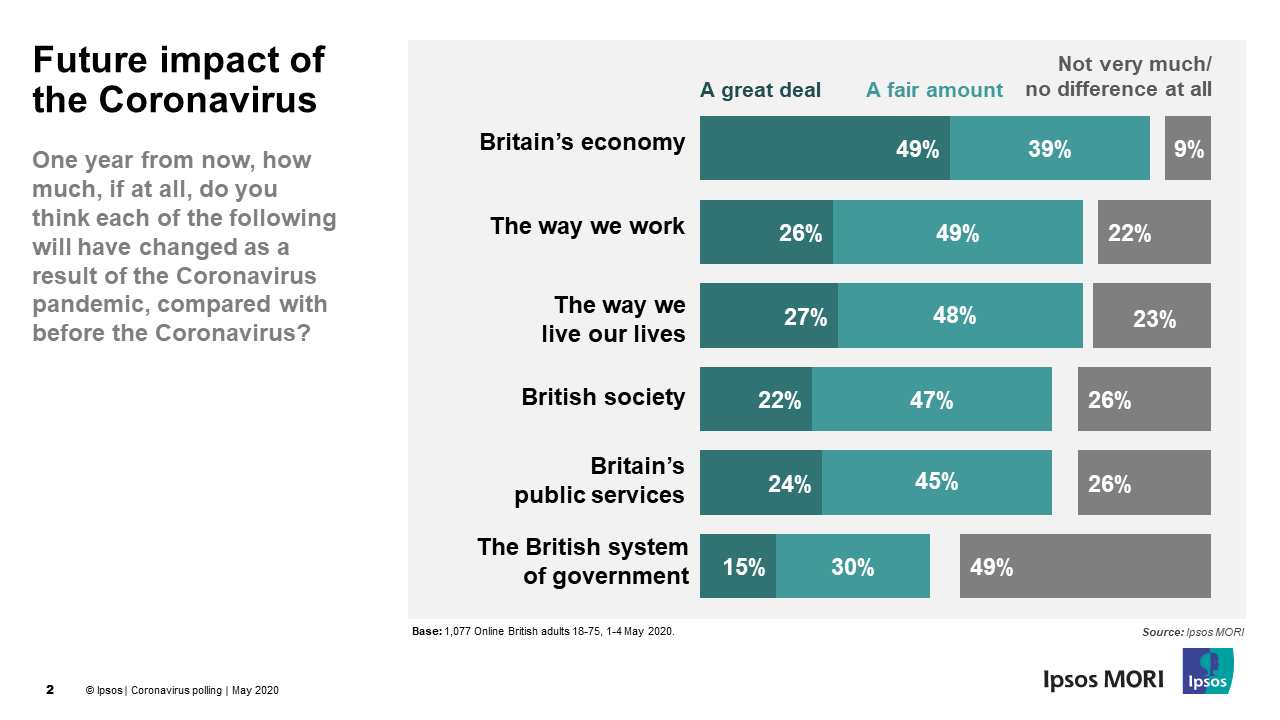 There is a contrast between the forecast impacts of the Covid-19 pandemic on public services and the way we are governed.  Public services are expected to be affected like much of the rest of British society – seven in ten (69%) think they will have changed one year from now thanks to the coronavirus, and one in four predict a great deal of change.  However, in contrast, people think the British system of Government is less likely to be impacted by the crisis. Only 45% expect to see the system of government alter, while half (49%) expect to see few or no changes. Again, women and young people are more likely to expect changes to public services and Britain’s system of government. In particular, 62% of 18-34-year olds think Britain’s system of government will have changed, against just 35% of 55-75-year olds.

Labour voters (who tend to be younger) also expect to see a change – 54% of 2019 Labour voters think the way we are governed will have changed, compared with just 39% of Conservatives.

The British public expect the impact of the coronavirus to be with us for some time, with knock-on effects ranging across British society and the way we work and live our lives.  With sobering news today  from the Bank of England, it’s also not surprising that Britons think it is the economy that will be most deeply affected.  Having said that, views on Britain’s system of government also stand out, where there is clearly greater scepticism that things will change.