In new research by Ipsos MORI, two-thirds (67%) of Britons say they are dressing more casually since the COVID-19 pandemic started. Two-thirds say this means they can exercise their personal choices more while 63% say they are happy that they can dress more casually.

Six in ten (59%) feel confident about knowing how to dress in a more casual way, the same proportion say working from home makes it easier to do so. Just over half of Britons say you rarely see people at work in business suits these days (54%). 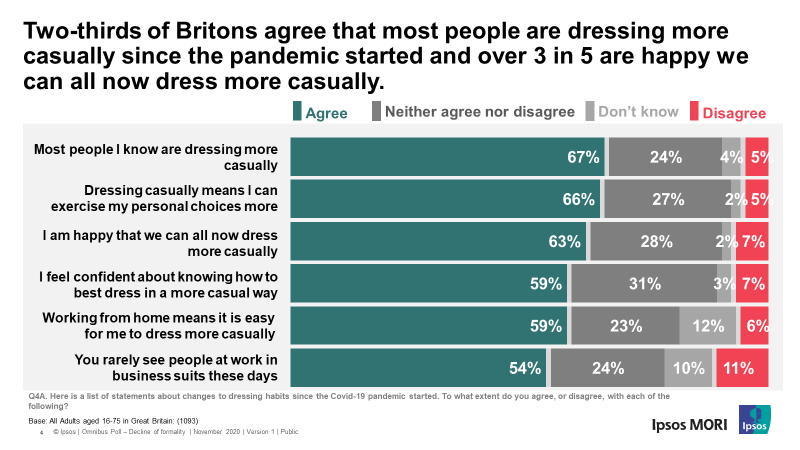 Half of Britons say they are more likely to have worn clothes such as gym wear, joggers or leggings for everyday wear since the start of the pandemic with 61% of knowledge workers saying they wear business wear much less often these days. Just over a third (35%) have spent more time than usual wearing pyjamas or night clothes during the day. Over 6 in 10 of those who identify as female say they are less likely to wear high heel shoes now (62%). 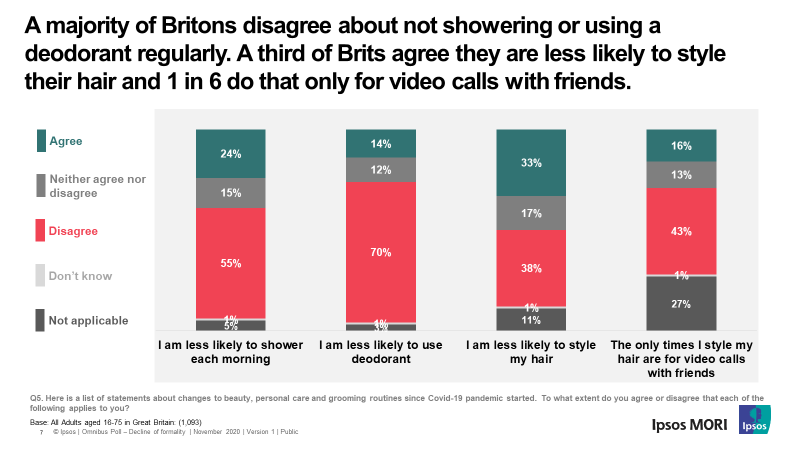 Almost half of those who identify as male have gone unshaven for more days than before the pandemic started, a third have grown a beard (32%). Among women, half (52%) are wearing less make-up than usual. Two in 10 (18%) say the only times they wear make-up are for video calls with friends.

There has been a trend towards less formality for many years, but this has been accelerated by the pandemic and people subsequently working from home. Heels are being ditched, sportswear is on the up and people are embracing casual work wear.  For some, however, it is a tale of two halves – with a quarter of people dressing smartly on the top, whilst keeping it casual on the bottom!