But this marks a significant shift in public attitudes:  only 11% of the public thought we were talking about immigration too much in April 2011, and this was still only 26% by March 2014 – before jumping again to 37% in the latest poll.

Over that time the movement has been away from people thinking we have talked about it too little – the proportions thinking we’re talking about immigration the right amount have not changed greatly (from 20% in 2011 to 23% now). 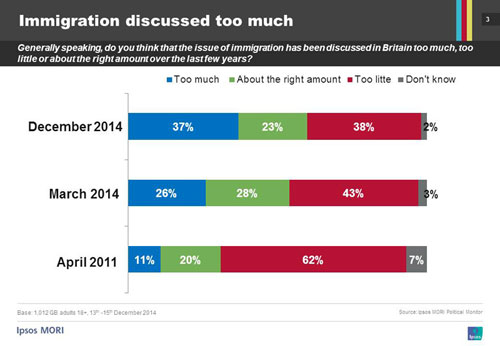 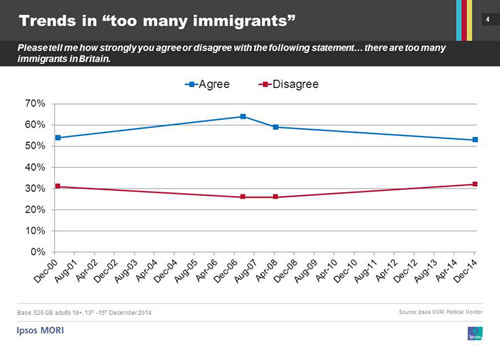 "Until relatively recently immigration has been a strangely unifying issue among the public – in the sense that the majority of people thought it had been ignored too much by politicians and the media.  But we have seen a real shift in that over the last year or two.  Unfortunately, this hasn’t meant that people are increasingly satisfied with the level and type of debate.  Instead, it seems that immigration is becoming a more polarising issue – and that is likely to continue as we approach the general election. This is particularly the case because of the clear political dividing lines in opinion, with three quarters of UKIP supporters and four in ten Conservative supporters saying we’re not talking about immigration enough."

Ipsos MORI interviewed a representative sample of 1,012 adults aged 18+ across Great Britain. Interviews were conducted by telephone 13-15 December 2014. Data are weighted to match the profile of the population.

Where percentages do not sum to 100 this may be due to computer rounding, the exclusion of “don’t know” categories, or multiple answers. An asterisk (*) denotes any value of less than half a per cent. Data are based on all adults unless otherwise stated.