The NHS remains a key election battleground. In Ipsos MORI’s Political Monitor, the public say that the NHS and the EU/Brexit are the main issues that will help them decide which party to vote for at the election (43% and 42% respectively).

Given that it is such an important issue to the public, it is not surprising that Labour is making the NHS a centrepiece of its election campaign. These messages seem to be cutting through: our May Issues Index shows a jump in concern about the NHS, leaving it as the most important issue facing Britain (61%, the highest score since April 2002 – and with interviews mostly completed before the cyber attacks).

Labour has traditionally performed better than the Conservatives on healthcare. Our most recent polling, completed before the manifestoes were released, returns a 15 percentage point lead on healthcare for Labour, with 40% saying Labour has the best policies and 25% that the Conservatives do. Healthcare is the only one of the top five policy areas in which Labour has a lead (the Tories lead on Brexit, the economy, education and immigration). 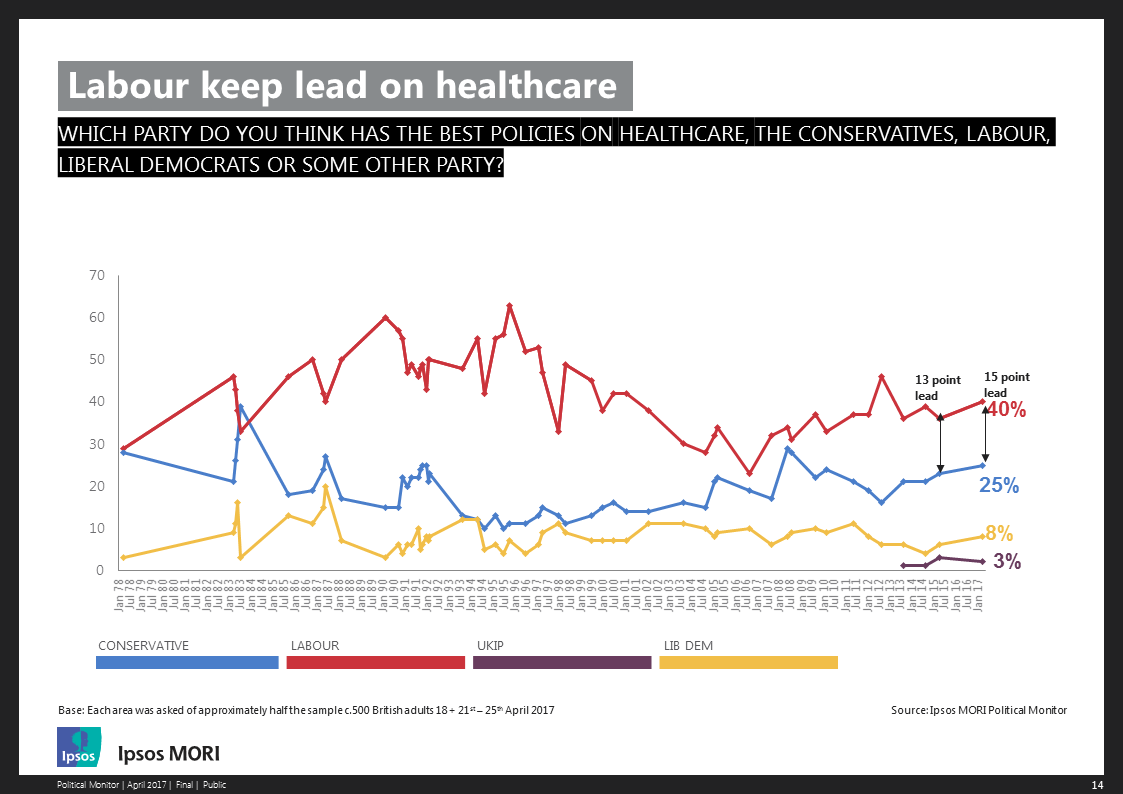 Not only does Labour have a lead, but the Conservatives are open to challenge. The public are worried about the future of the NHS. Recent polling for the Health Foundations shows that around half think the general standard of care provided by the NHS will get worse over the next few years (48%) and only 14% think it will get better. The British public are more pessimistic about healthcare than other public services and they are also more pessimistic than any of the 23 countries included in our Global Trends Survey.

Although the public are worried about the future of the NHS, they remain positive about how the NHS is delivering. Data from The King’s Fund’s British Social Attitudes survey show that overall satisfaction with the running of the NHS remains consistently high; in 2016, 63% said they were satisfied and 22% said they were dissatisfied, showing no statistically significant change from 2015. And in Ipsos MORI’s own Global Trends Survey, the British are among the most positive countries about the quality of healthcare they can access.

So despite Labour having a lead in the polls on healthcare and high levels of concern about the future of the NHS, exacerbated by a succession of difficult winters, satisfaction has held up. And Labour’s 15 percentage point lead on healthcare is not as clear-cut as it may sound. The Prime Minister is more trusted on healthcare than her own party (34% trust May versus 25% for the Conservatives) – and there is little to choose between Corbyn and May (37% trust Corbyn versus 34% for May). And not only that, but Conservative supporters are just as likely to say the NHS is a key issue facing the country as Labour supporters – and of course they may prefer Conservative policies on the issue. So just because the NHS is seen as the top issue, that doesn’t mean all of that will work to Labour’s advantage.

How might this play out in the ballot box? Until patient and public perceptions of the NHS reach a tipping point that we have not yet seen, it is unlikely to be the deciding factor in the ballot box. It wasn’t in the 2015 general election, when the NHS was again seen as the most important issue facing Britain. But our Issues Index, reporting a 15-year high in concern about the NHS, suggests we are edging ever closer to that tipping point.

Labour’s manifesto pledges for the NHS are ticking off the list of key concerns for the public. Increased funding, a commitment to meeting waiting time targets, scrapping pay caps for NHS staff, addressing the postcode lottery – and the list goes on – are all pledges that play well with voters. Now we must wait to see whether the public can be persuaded that the NHS is in enough trouble that it should determine who they vote for.