In a new online survey by Ipsos MORI, more than half of Britons (54%) say the country should pass excess doses of the COVID-19 vaccine to other countries once it has enough for its own immediate need. Three in ten (30%) want the UK to keep all extra doses in case they are needed in the future. 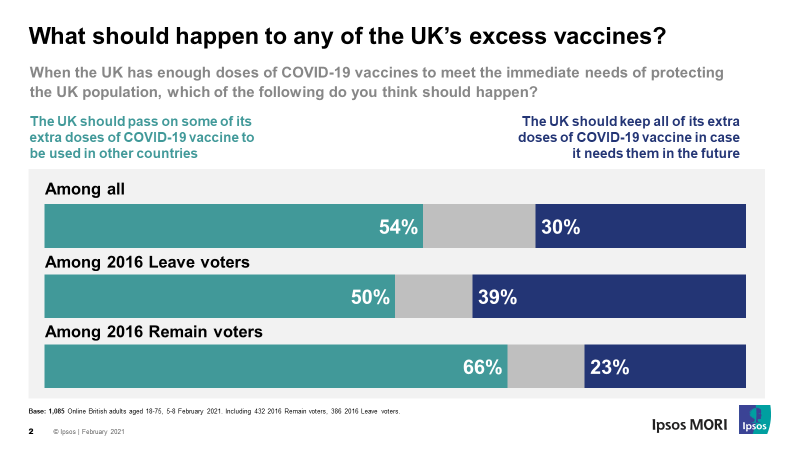 Those who voted to remain in the EU in 2016 are significantly more likely to want to share any excess vaccines, two-thirds (66%) say the UK should pass on some of its extra doses compared to only half (50%) of those who voted to leave the EU. Desire to give vaccines to other countries is also higher among 55-75-year olds (61%), while 49% of 35-54s and 53% of 18-34s want to share the excess vaccines.

Britons are most likely to want to wait until everyone in the UK has been fully vaccinated before any doses are given away (68%). Around half (51%) would support giving vaccines to other countries once over-50s, frontline health and social workers and those clinically vulnerable have been vaccinated. Forty-seven per cent would be happy to start giving them away once over-65s and frontline health and social care workers had received the jab. Half (53%) of those aged 18-34 support sharing the vaccine with other countries at this stage, compared to only 43% of 35-54s and 46% of 55-75s. 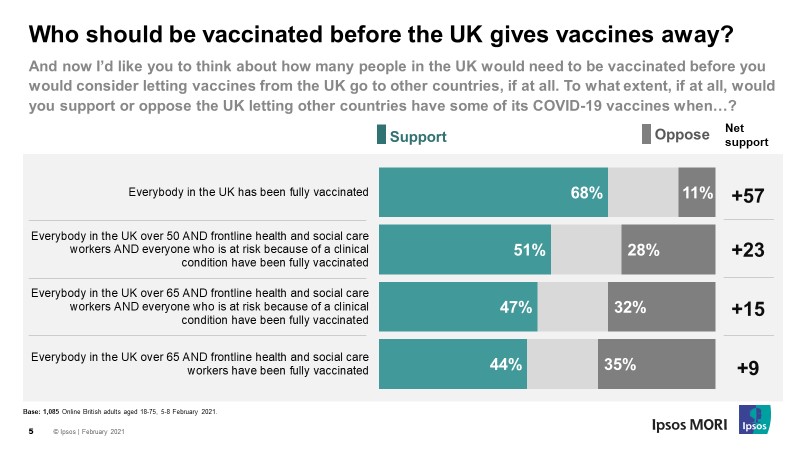 Less concern is given to those in richer Commonwealth countries, only 4% believe excess doses should go there. Fewer than 1 in 10 (7%) want to send doses to the EU to be shared amongst its members and only 11% want to prioritise countries with strong historical, cultural and political links to the UK.

With the UK’s vaccine rollout being a world leader, Britons have clearly understood the global nature of the pandemic.  The majority of Britons believe that we should share our excess vaccines, giving it away to poorer nations but also sharing with richer countries too, selling it to them. But the greatest level of support is to do so only when everyone in the UK has been fully vaccinated.