One in four people (26%) say they’ve found it harder to follow the rules during England’s second national lockdown than they did during the first, with bad weather, a feeling of being worn out by the crisis, and a belief that the restrictions are not being applied fairly among the reasons, according to a new study. 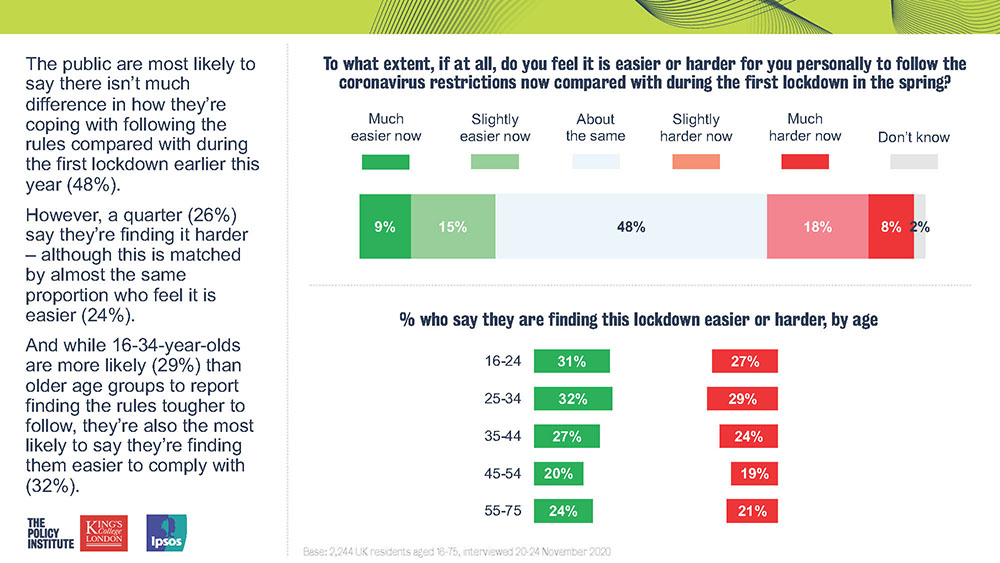 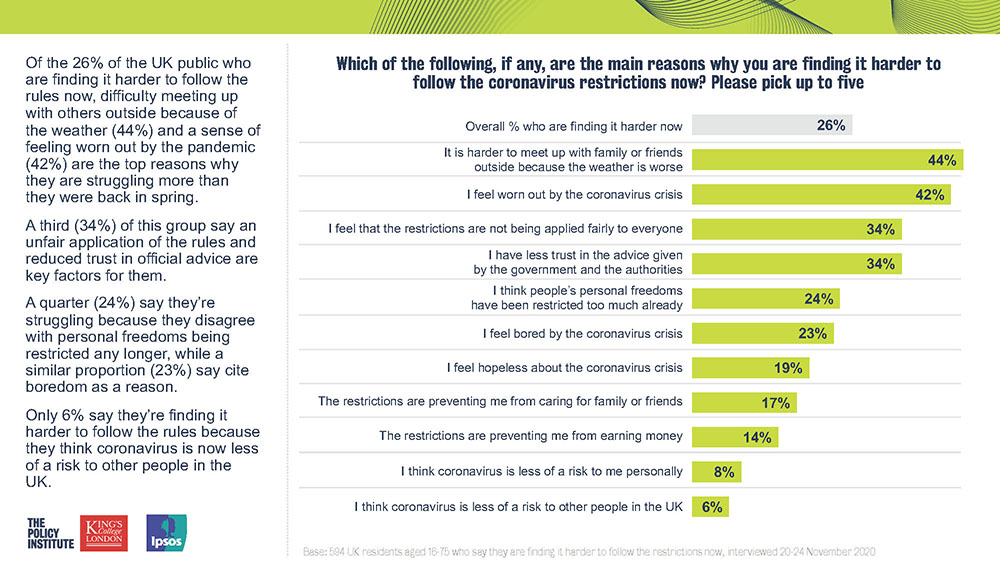 But despite some struggling, most have not found the current restrictions harder than they did in spring, with 24% saying they’re easier to follow now and 48% saying they’re coping about the same. The vast majority of people also say they’re still being as careful as before about following the rules.

The research, by King’s College London and Ipsos MORI, looked at why some have found it more of a challenge to comply with the rules under this latest lockdown, as well as the public’s experience of the restrictions over the course of the entire COVID-19 crisis.

Why some have found this lockdown harder

Among the one in four who have found it harder to follow the rules during the second national lockdown, the top reason cited was difficulty in meeting up with family or friends outside because the weather is worse (44%). This was closely followed by a feeling of being worn out by the crisis (42%).

A third (34%) of those who have struggled more with the rules recently said a feeling that the restrictions were not being applied fairly to everyone was a factor, while the same proportion attributed it to now having less trust in advice given by government and the authorities.

There was also a gender divide in the reasons people were struggling. 54% of women who had found the rules tougher during this second lockdown said the difficulty in meeting up with others outside was a key reason, much higher than the 33% of men who say the same.

Women were also more likely to have felt worn out by the pandemic (47% vs 33%). Men, by contrast, were more likely to say boredom was one of the reasons they’d found it harder to follow the rules this time (27% vs 19%).

Across the population as a whole, two-thirds of people (65%) said they’re roughly as careful about following the rules now as they were during the first national lockdown.

Around one in six said they’re being more careful (17%), while a similar proportion (16%) said less careful.

Experiences of the restrictions over the course of the crisis

Looking further back over the pandemic reveals a range of responses to the coronavirus restrictions.

Seven in 10 (72%) have felt disappointed by the number of people they’ve seen not following the recommended measures in public, and three in 10 (32%) have felt embarrassed by someone they know doing the same.

At the same time, one in eight (12%) have felt embarrassed by someone they know sticking too closely to the rules.

Three in 10 (31%) have felt anxious about whether they’re obeying the restrictions correctly, while around half as many (16%) say they’ve accidentally broken the rules because they didn’t understand what they were. This almost doubles, to 29%, among 16-34-year-olds.

And in a further sign that some have struggled with the restrictions over the course of the pandemic, one in six (16%) say they’ve felt there’s no point following the rules any longer, and one in seven (14%) say they’ve been pressured to break the rules by a friend or family member.

The British public have proved remarkably resilient throughout the coronavirus crisis. The vast majority say they’re still following the restrictions carefully, and most haven’t struggled with the rules during this second national lockdown any more than they did during the first. But this isn’t everyone’s experience: one in six say they’re not being as careful in obeying the rules, and one in four have found it tougher to follow them this time.
Social isolation and a feeling of being worn out by the crisis are drivers of this, but so too is the official response to the pandemic. A third of those who have found the latest rules more of a struggle say it’s because they feel the restrictions have not been applied fairly, and the same proportion cite reduced trust in official advice as a reason. As we come out of this national lockdown and enter a new tiered system, the government must rebuild confidence in its approach and clearly communicate what it is doing and why.

While the majority haven’t found this second national lockdown anymore of a struggle than the first one, it’s important to remember that women found the first lockdown harder than men. And we see now that those who say they’re struggling more with being worn down by the crisis are also disproportionately women. This research contributes to the body of work which brings to light the broader social impacts of the lockdowns which have been implemented this year.

Ipsos MORI interviewed a sample of 2,244 adults aged 16-75 in the United Kingdom using its online i:omnibus between 20 and 24 November 2020. Data has been weighted to the known offline population proportions for age within gender, government office region, working status, social grade and education. All polls are subject to a wide range of potential sources of error.