In a new global Ipsos survey, across 30 countries, apart from those in Peru, Britons are most likely to recognise a link between obesity and more severe symptoms of COVID-19. Almost two-thirds (64%) think there is a link, compared to 15% who believe there is no tie.

Nearly half (45%) of the British public believe losing weight would be an effective way to reduce the risk of more severe COVID-19 symptoms, globally the most likely to believe this. Regular exercise and giving up smoking are also seen as effective ways to avoid more serious illness by 35% and 31% respectively. Britons are least likely to see giving up alcohol as an effective prevention method against more serious COVID-19 symptoms (4%). 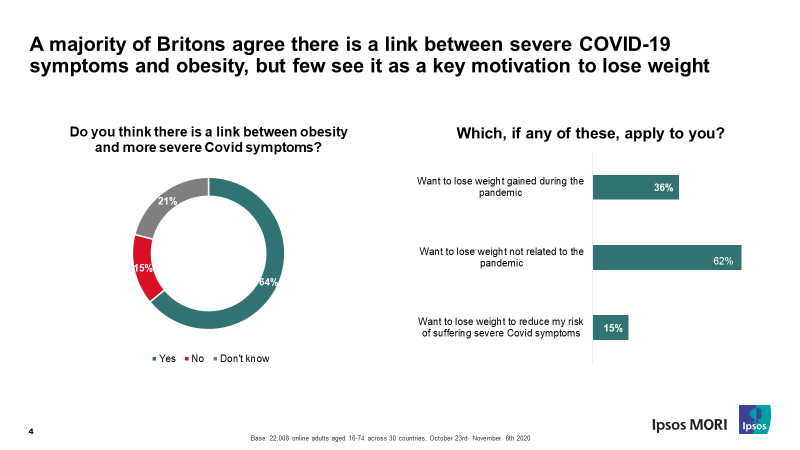 Despite the fact that a third (32%) of the British public have put on weight during the pandemic and the high awareness of the potential risks of getting more severe COVID-19 symptoms for people who are overweight, only 15% want to lose weight specifically to reduce their risk of severe COVID-19 symptoms, although two thirds (64%) say that it is important. 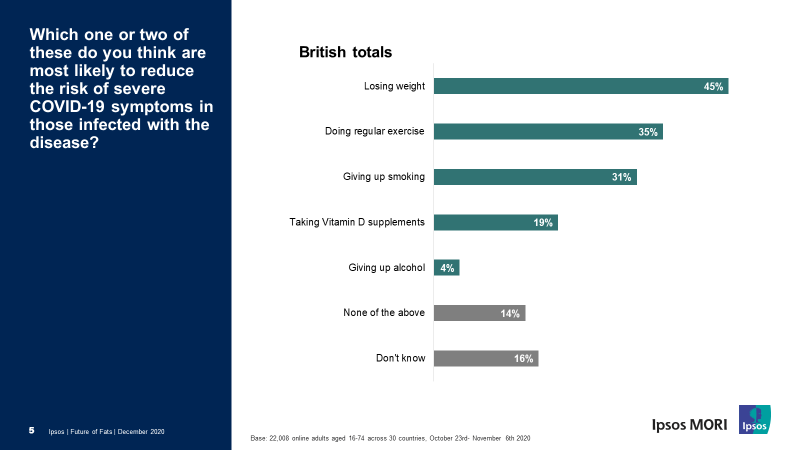 While a third of Britons have gained weight since the start of the pandemic, 31% globally have done the same. A quarter (24%) say they have lost weight. Three in 10 have done more exercise during the pandemic while 23% have seen the amount of time they spend exercising decrease. 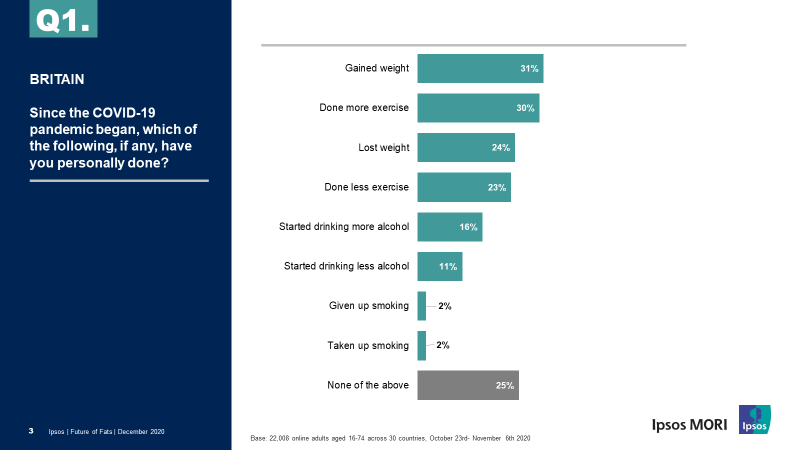 Only a small proportion of Britons have seen their alcohol consumption increase during the pandemic, 16% say they are drinking more alcohol. However, this is high compared to other countries with only Australia and the United States seeing bigger rises. While 2% have given up smoking since the outbreak, the same proportion have picked it up.

Given the scale and impact of the COVID-19 pandemic, the proportion of people who have gained weight during this time alongside the public awareness of the risk that being overweight can have on the severity of the resultant symptoms, it is concerning that few see this is a key motivator to lose weight. The virus in turn, is not creating the ideal situation to lose weight as with many of us working from home and generally spending less time outside, there is a very real risk of one pandemic fuelling another.