Men lag behind women when it comes to Christmas shopping, while women are feeling more stressed about their festive preparations, new polling from Ipsos MORI reveals.

Seven in ten Conservatives (71%) have done all or most of their Christmas shopping, making them the most prepared political group. Conservatives are also the least stressed about Christmas, with 12% very or fairly stressed, compared with 20% of Liberal Democrats, 25% of Labour supporters and 26% of UKIP supporters. 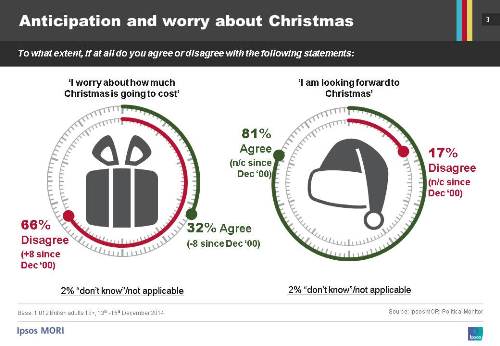 “Christmas is meant to be a time for sharing - but our survey suggests the burden isn't shared totally equally between men and women.  Women are twice as likely to say they feel stressed about their Christmas preparations, while nearly a quarter of men say they haven't done any of their Christmas shopping so far.  But that still doesn't stop the vast majority of people looking forward to Christmas itself.”

Ipsos MORI interviewed a representative sample of 1,012 adults aged 18+ across Great Britain. Interviews were conducted by telephone 13-15 December 2014.  Data are weighted to match the profile of the population.