New research by Ipsos in the UK shows that around 4 in 10 (41%) working Britons have seen at least a small impact on the way their company handles race-related matters in response to the death of George Floyd in April 2020 (although only 12% say it has had a great deal of impact). This increases to almost 6 in 10 (57%) of workers from ethnic minority backgrounds.  The research was carried out online between 29 April to 2 May, among 1,652 workers in full or part-time employment, or self-employed.

How do employees feel in their workplace?

Working Britons voiced some positive aspects when discussing their current workplace in terms of race, but also see areas for improvement. While six in 10 (61%) white working Britons agree their company is taking steps to ensure it creates an environment where people from different racial/ethnic backgrounds are included, this figure falls to 53% for workers from an ethnic minority background. Similarly, 7 in 10 (73%) respondents from white backgrounds agree they can be themselves at work without fear of bullying or harassment, falling to 60% of ethnic minority respondents. 63% of white Britons agree they feel valued at work – falling to half of ethnic minority respondents (49%). 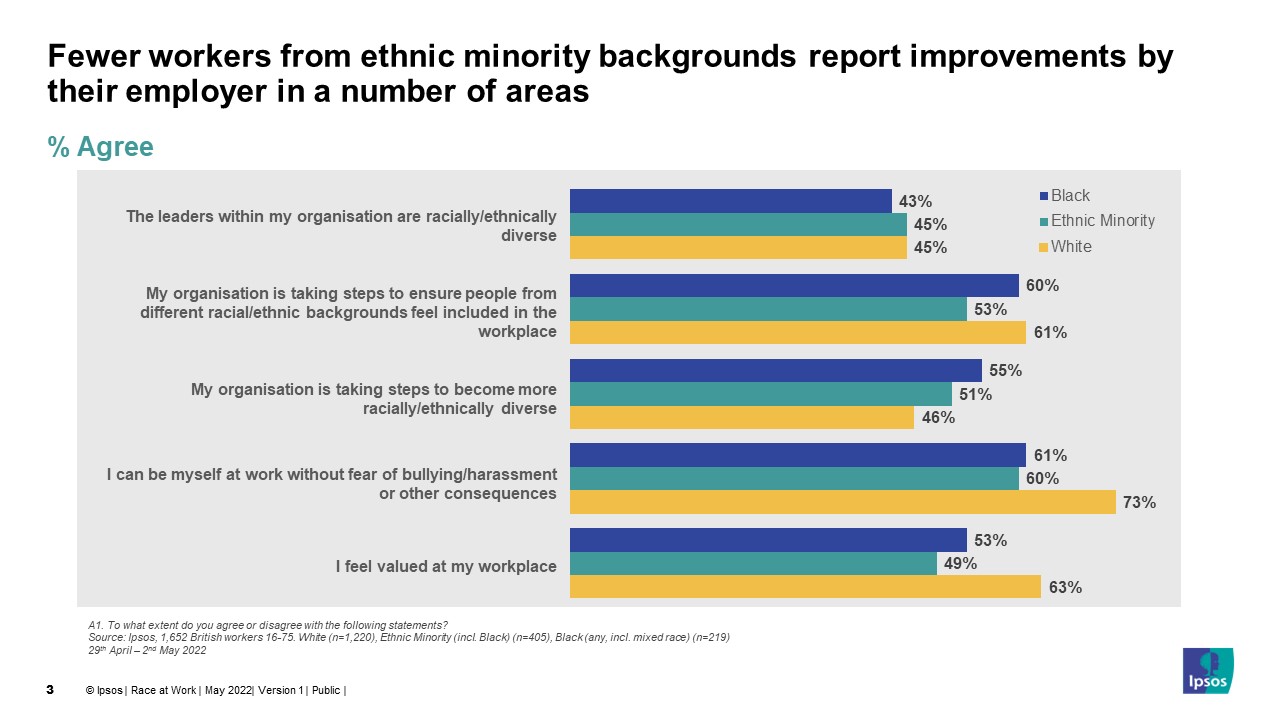 However, there is room for improvement. Less than half of working Britons say the leaders/managers of their organisation are racially diverse (45%), with a similar proportion (47%) saying their company is proactively taking steps to become more racially diverse, such as seeking out candidates from under-represented groups.

By contrast, fewer than 1 in 10 felt any of these dimensions had worsened compared to two years ago, although this tended to be slightly higher among ethnic minority respondents (but still a minority, and less than those who thought things were getting better).

Are people experiencing microaggressions in the workplace? 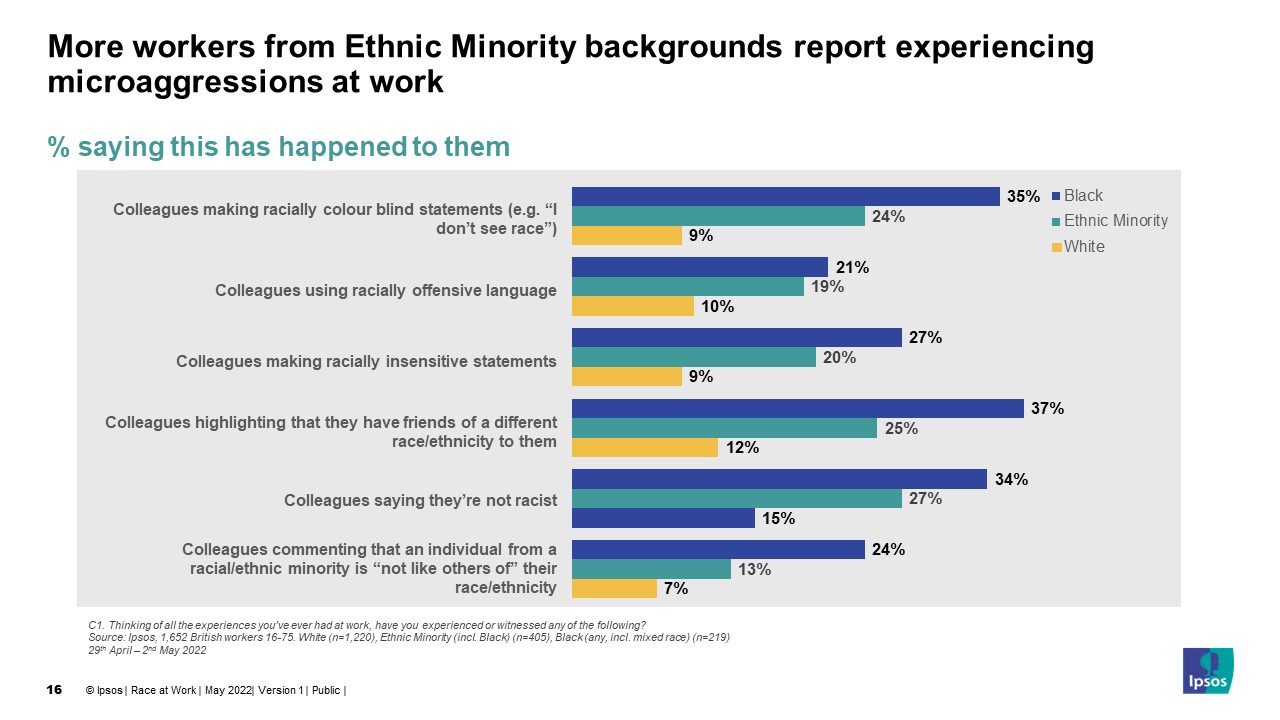 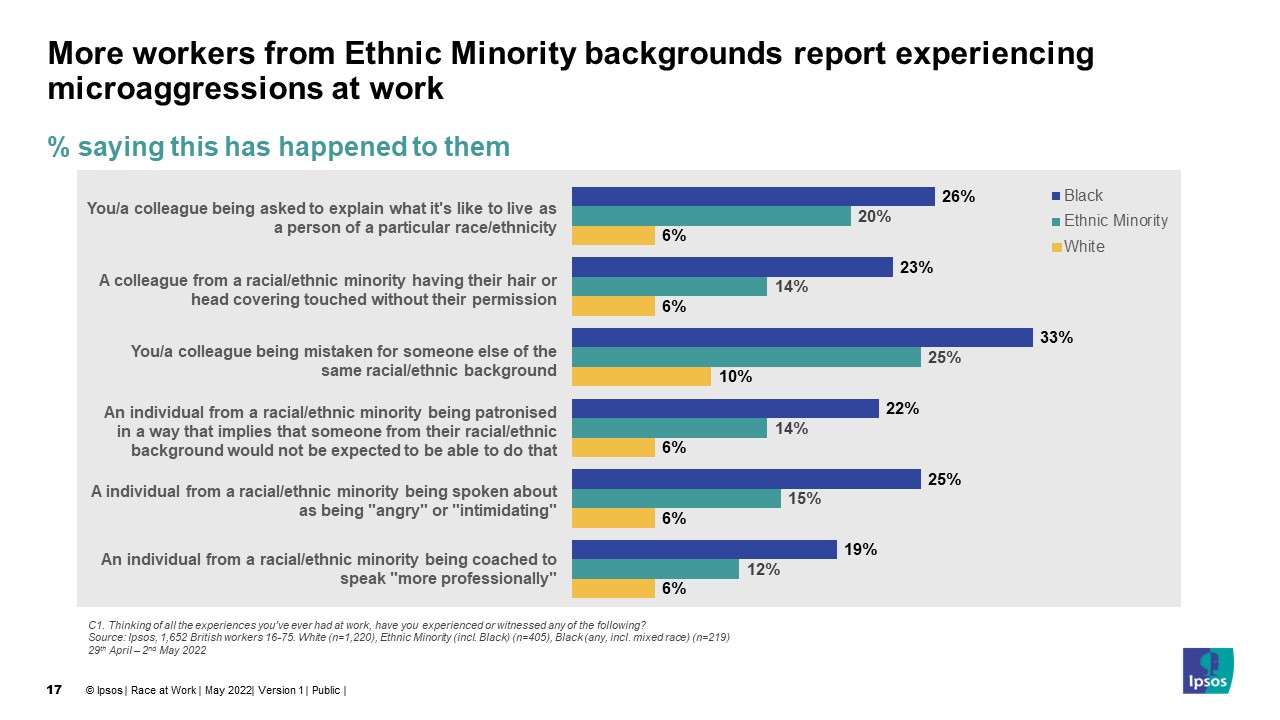 Among those who have experienced microaggressions in the workplace, people are most likely to say they experience these things about the same amount as they did before the murder of George Floyd (between 40% and 50%) while around the same proportions say it happens more or less (around 20% for each).

While the murder of George Floyd two years ago alerted employers into looking at ways to improve race relations, our latest data shows that this willingness has, in the main, not been translated into sustained and impactful actions for workers.  Many workers, especially those from ethnic minority backgrounds, continue to experience microaggressions at work, highlighting that employers still have some way to go to create diverse and inclusive workplaces.

Ipsos interviewed a representative quota sample of 1,652 workers (full time, part time or self-employed) aged 16-75 in Great Britain. This includes 405 interviews with those from an ethnic minority background (including 219 with those who described their ethnicity as Black, including those who identified as Black mixed with another race).  Interviews took place on the online Omnibus using the Ipsos.Digital platform on 9th May 2022. Data has been weighted to the known offline population proportions for age, working status, social grade within gender, government office region and education.