Ipsos polling for the Halifax International Security Forum in August-September this year shows that in the wake of the Coronavirus pandemic and increasing tensions over Hong Kong, Huawei and human rights, attitudes in Britain towards China have soured – only one in five (19%) Britons believe China will have a positive influence on global affairs over the next decade, a drop of 16 percentage points since 2019. This follows the global picture, whereby positive sentiment towards China has fallen 11 points over the year.  In China, views of Great Britain are considerably more favourable, with three in five (58%) saying Britain will have a positive influence, although this is also a fall of 9 points since 2019. 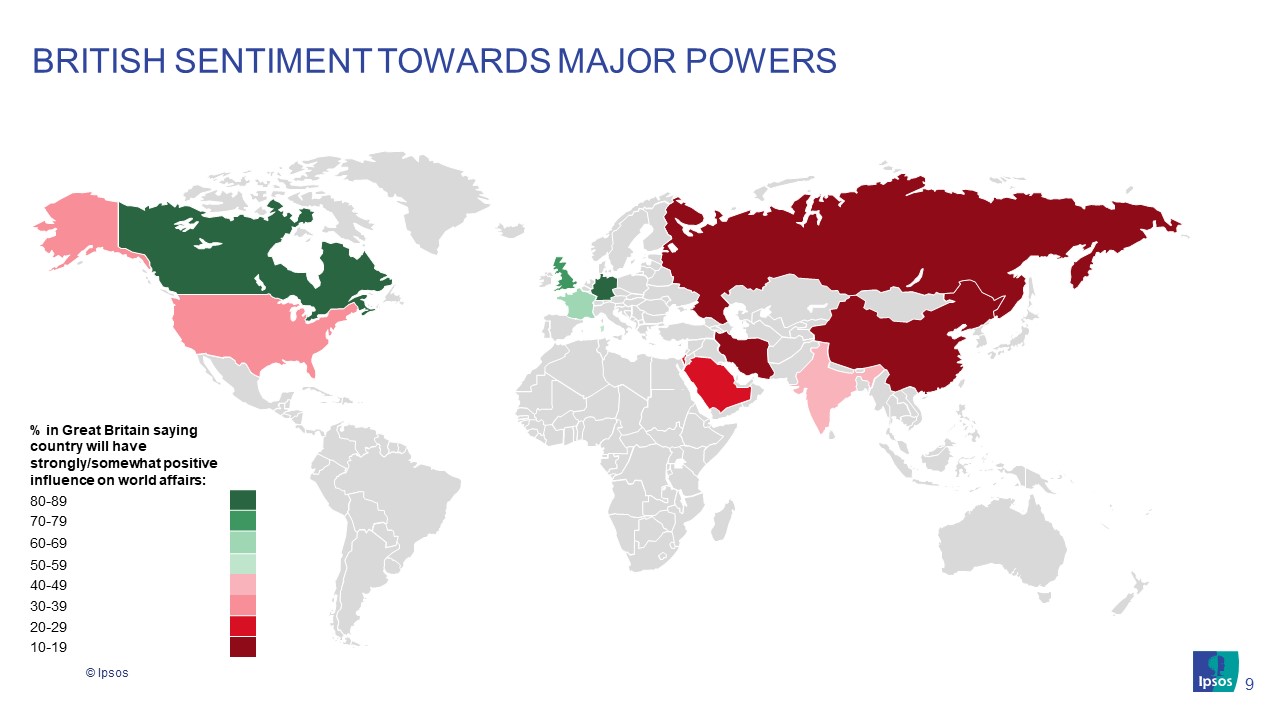 As in previous years, Britons rate Canada most positively, while they have also become more favourable to Germany (up nine points) and France (up 6 points) – noting that fieldwork was in the summer before the current round of Brexit talks.  International organizations and institutions are also generally seen by Britons to have a positive global influence - a majority believe that the United Nations (75%), NATO (73%), the International Monetary Fund (62%), the World Bank (62%), and the European Union (59%), will have a positive influence in the world in the next decade. 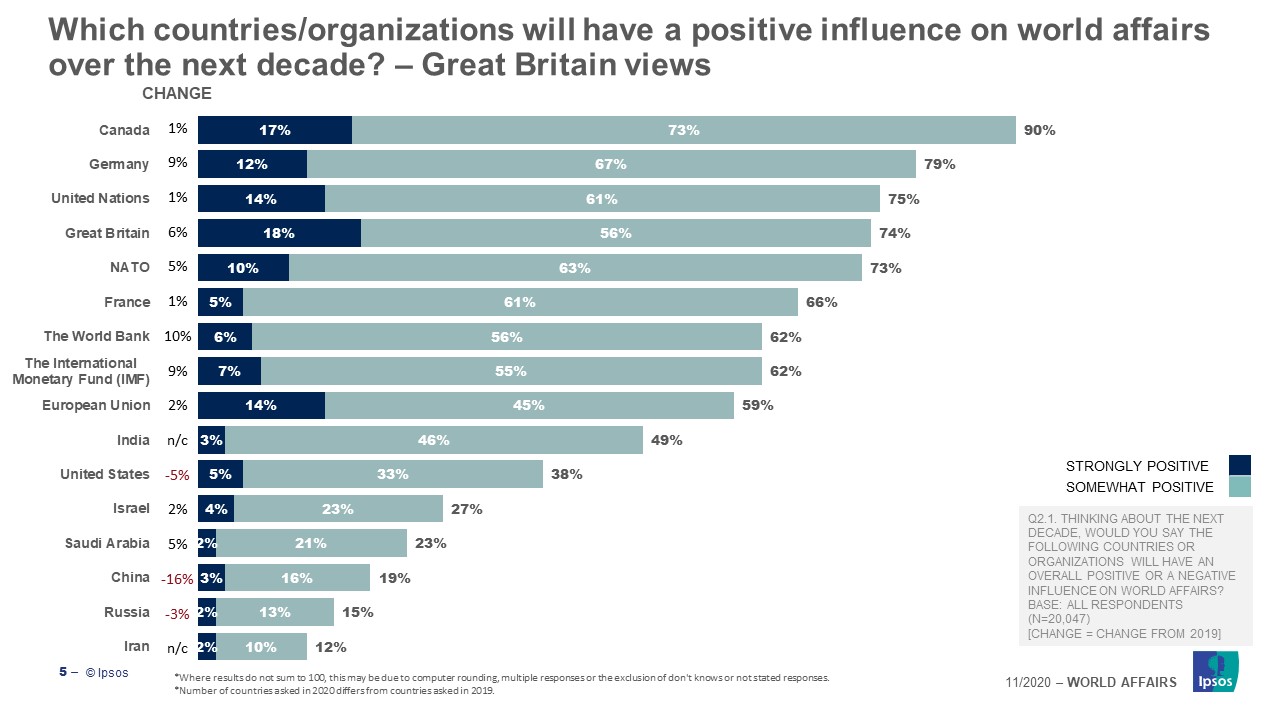 Two-thirds globally (66%) believe that Great Britain will have a positive global influence over the next decade, which is a four point rise since 2019, albeit still below its score of 72% in 2015.  Great Britain’s influence is seen most positively by Colombia (84%), South Africa (82%) and the United States (82%), while it is seen least positively by Turkey (44%), Belgium (41%) and Germany (39%) – although views of GB in both Germany and Belgium have improved since last year. 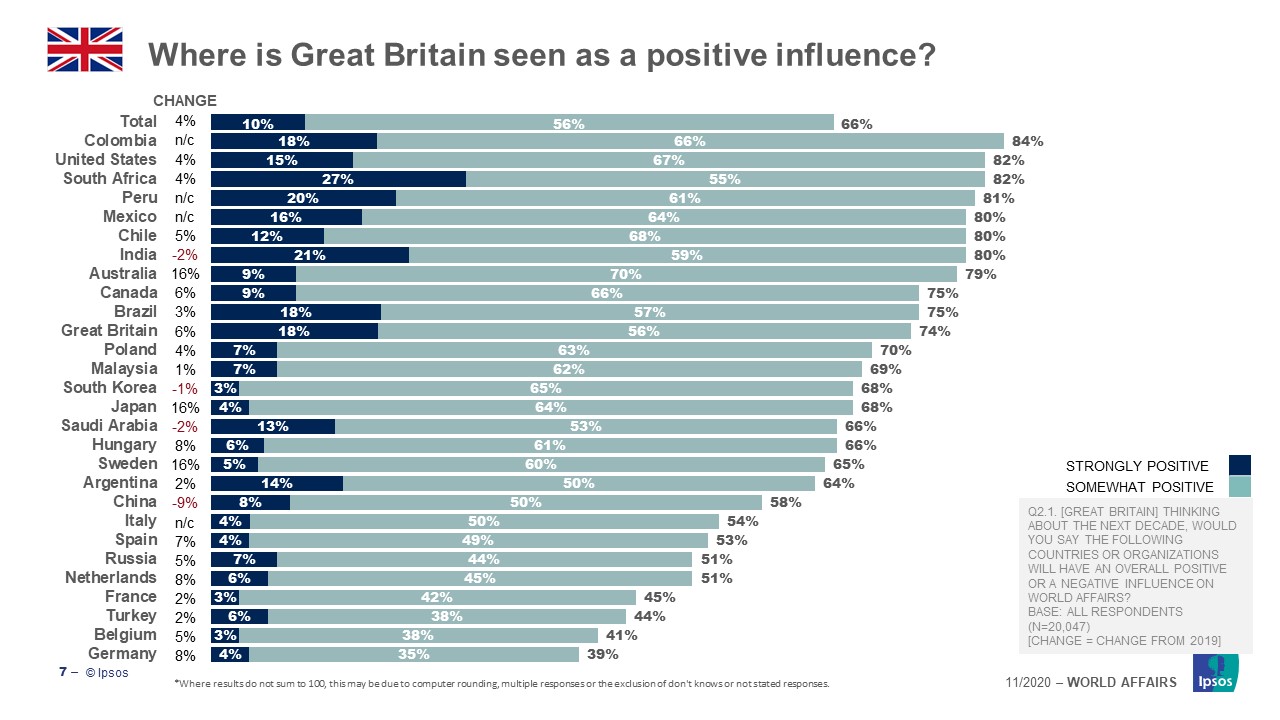 But despite this, there is even stronger sentiment among Britons that Britain should take a leading role in the world: almost nine in ten (87%) agree that Britain has a responsibility to be a moral leader globally and set an example for other countries to follow. This is higher than all other countries except for Canada, and 13 points higher than the global average. Britons are also more likely than the global average to say that their country should work with other countries towards global goals, even if that means their country doesn’t always get what they want, with 84% in Britain saying this, more than any other country except Malaysia.

It’s hugely positive that two thirds around the world see Great Britain as having a positive global influence over the next decade, up on last year. As Britain emerges from Brexit negotiations, the positive view of Britain around the world will be a good first step in deepening relationships with them, particularly in countries like the USA, India and Canada which have some of the highest levels of support for the idea that Britain is a positive influence in the world. The environment at home however with almost three quarters of Britons believing we should focus less on the world and more at home given the current COVID crisis might be less conducive to that new global Britain.

These findings are from wave 145 of the Ipsos Global Advisor survey. Fieldwork took place between August 21st and September 4th 2020. The survey is conducted via the Ipsos Online Panel system. For the results of the survey presented herein, an international sample of 20,047 adults aged 18-74 in the US, Malaysia, South Africa, Turkey and Canada, and age 16-74 in all other countries, were interviewed. Approximately 1000+ individuals participated on a country by country basis via the Ipsos Online Panel with the exception of Argentina, Belgium, Chile, Hungary, Malaysia, Mexico, Netherlands, Peru, Poland, Russia, Saudi Arabia, South Africa, South Korea, Sweden and Turkey, where each have a sample approximately 500+. The precision of Ipsos online polls are calculated using a credibility interval with a poll of 1,000 accurate to +/- 3.1 percentage points and of 500 accurate to +/- 4.5 percentage points. For more information on the Ipsos use of credibility intervals, please visit the Ipsos website.
16 of the 29 countries surveyed online generate nationally representative samples in their countries (Argentina, Australia, Belgium, Canada, France, Germany, Great Britain, Hungary, Italy, Japan, Netherlands, Poland, South Korea, Spain, Sweden and United States).

Brazil, Chile, China, Colombia, India, Israel, Malaysia, Mexico, Peru, Russia, Saudi Arabia, South Africa and Turkey produce a national sample that is more urban & educated, and with higher incomes than their fellow citizens.  We refer to these respondents as “Upper Deck Consumer Citizens”.  They are not nationally representative of their country.

Weighting has been employed to balance demographics and ensure that the sample’s composition reflects that of the adult population according to the most recent census data.