A new survey by Ipsos shows widespread support for various actions by the UK government to address climate change, both domestically and around the world. Deforestation seems to be an important area to address among many Britons, both in the UK and abroad, while increased investment in renewable energies and improved emissions reduction targets around the world also receive large levels of support.

Considering international actions they’d like to see the UK government take to address climate change, Britons are most likely to support banning imports of goods linked to deforestation (60%) and the use of Britain’s diplomatic influence to persuade other countries to increase their emissions reduction targets (58%). Only around 1 in 10 oppose these actions (10% and 8% respectively). 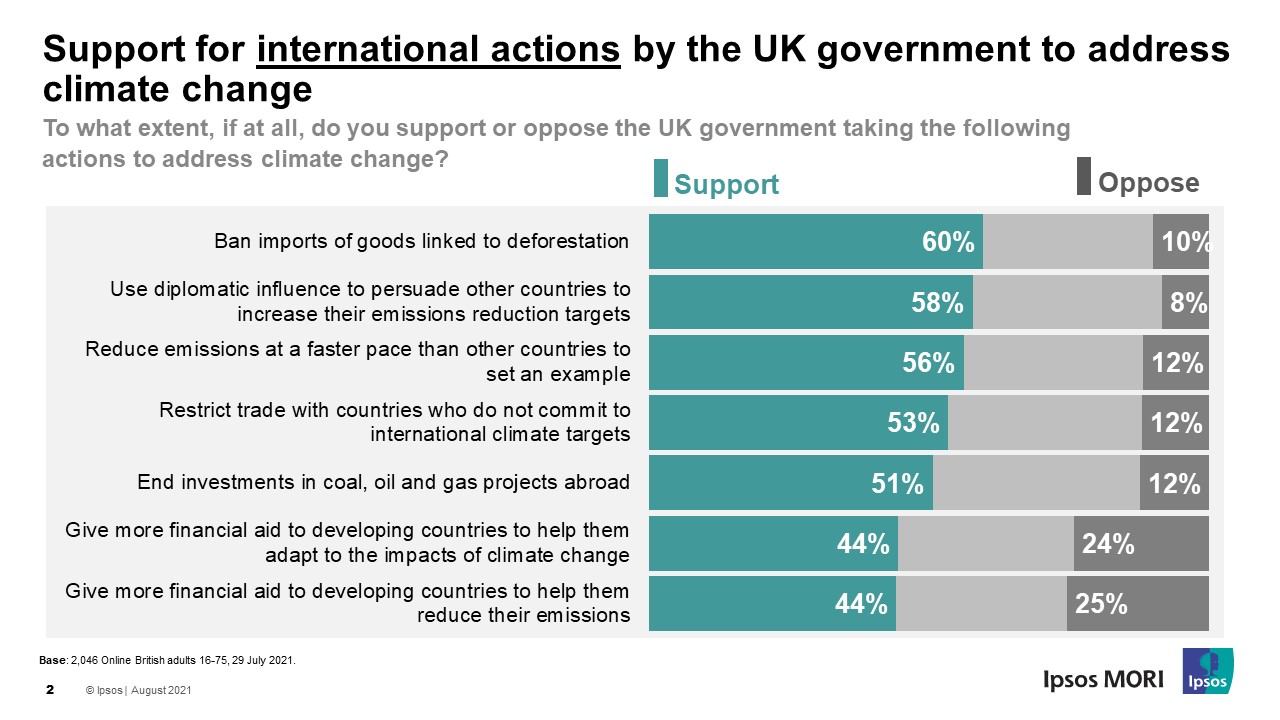 A majority of Britons would also like to see the UK government reduce emissions at a faster pace to set an example to other countries (56%), restrict trade with countries who do not commit to international climate targets (53%) and end their investments in coal, oil and gas projects abroad (51%).

Looking closer to home, 7 in 10 (71%) support the increased investment of money in renewable energy here in the UK, only 7% oppose this. Over half (56%) would like to see the ban of all goods in the UK that are linked to deforestation, 1 in 10 oppose (11%).

Less than half (44%) are in favour of removing all coal power from the UK, just under 1 in 5 would be against the UK government taking this action (17%). Only a third (35%) support the banning of sales of new petrol and diesel vehicles in the UK, a similar proportion are opposed (32%). 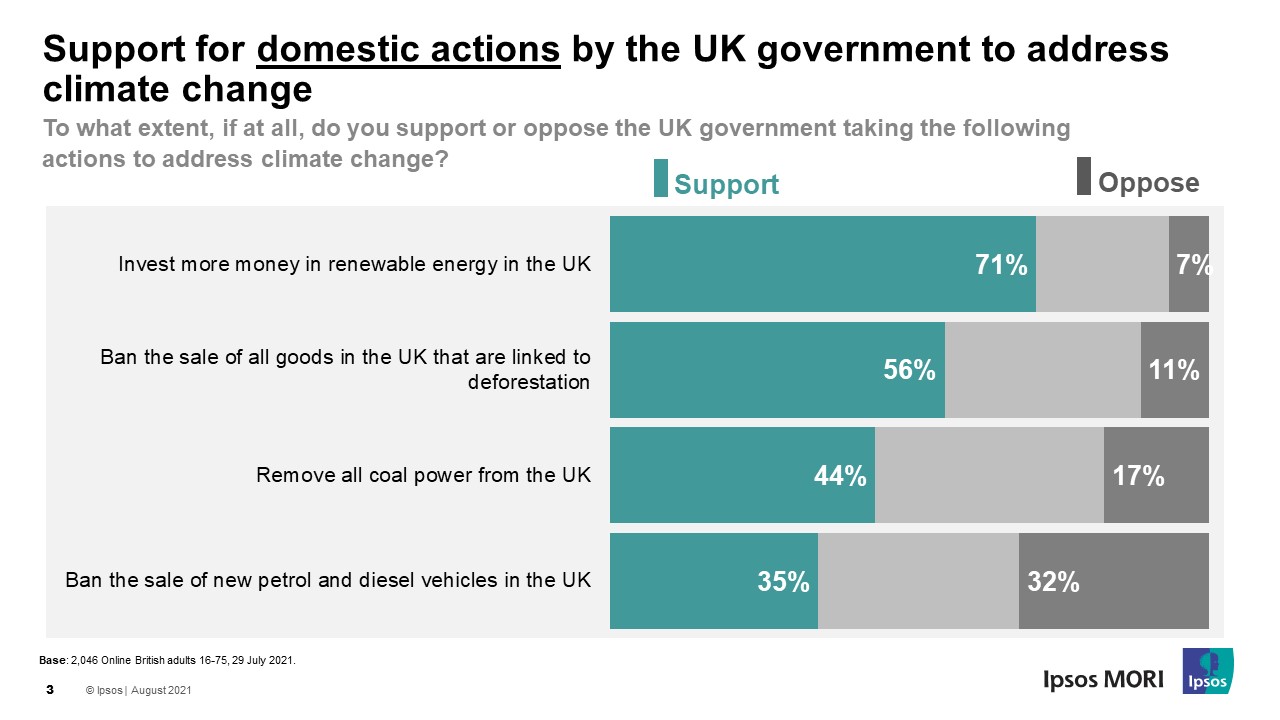 As part of the UK’s international commitment to combat climate change, the government has committed to reducing greenhouse gas emissions by at least 68% by 2030. Most Britons believe this commitment is about right, 42% believe the government’s pledge is at the right level while a quarter (25%) say it is too ambitions and 17% say not ambitious enough. Only 4% of Britons say this commitment is unnecessary. However, in March 2021, only 3 in 10 (31%) of Britons said the UK government had a clear plan to tackle climate change. 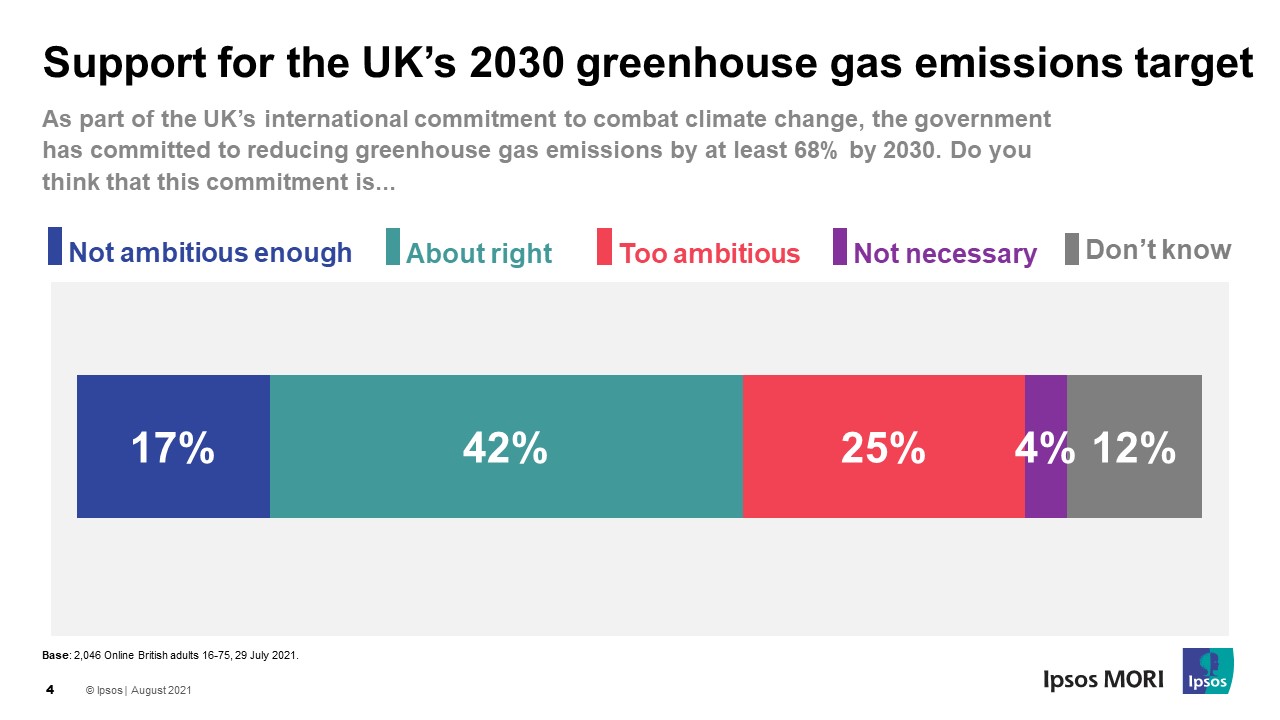 Previous Ipsos surveys have shown how keen Britons are for the government to take action against climate change, here we see particular interest in tighter regulations and increased investments.  As well as desires to see more done on home soil, there is  appetite and opportunity for the UK to be global leaders in the climate change fight.

Ipsos interviewed a representative sample of 2,046 British adults aged 16-75. Interviews were conducted online on 29th July 2021. Data are weighted to match the profile of the population. All polls are subject to a wide range of potential sources of error.