Ipsos has partnered with Futerra Solutions Union in a landmark global study that finds surprisingly high levels of fatalism concerning climate change among young people and a new inequality of attitude dependent on age, wealth and location.

Of the 20,000 people from 27 countries surveyed, a fifth of the youngest (under 35 y/o) cohort said they believe it is ‘too late to fix climate change’, highlighting a fatalism about their future not found in older groups.

The survey found younger people to be 66% more fatalistic about the chances of reducing greenhouse gas emissions to a level that will slow climate change to an acceptable degree.

Faith in politicians to act is low, with less than 30% of people worldwide confident that governments are leading climate action. Around 68% are instead pinning their hopes on new technologies (like wind and solar power) to reduce climate change.

58% of those surveyed are optimistic about our chances of solving climate change, against 31% who report a more pessimistic outlook. Optimism correlates with higher economic development. 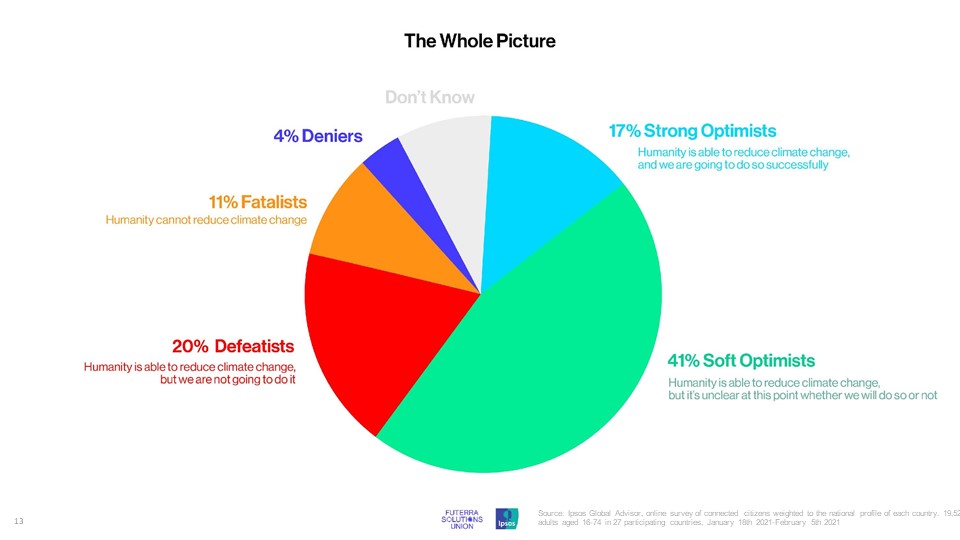 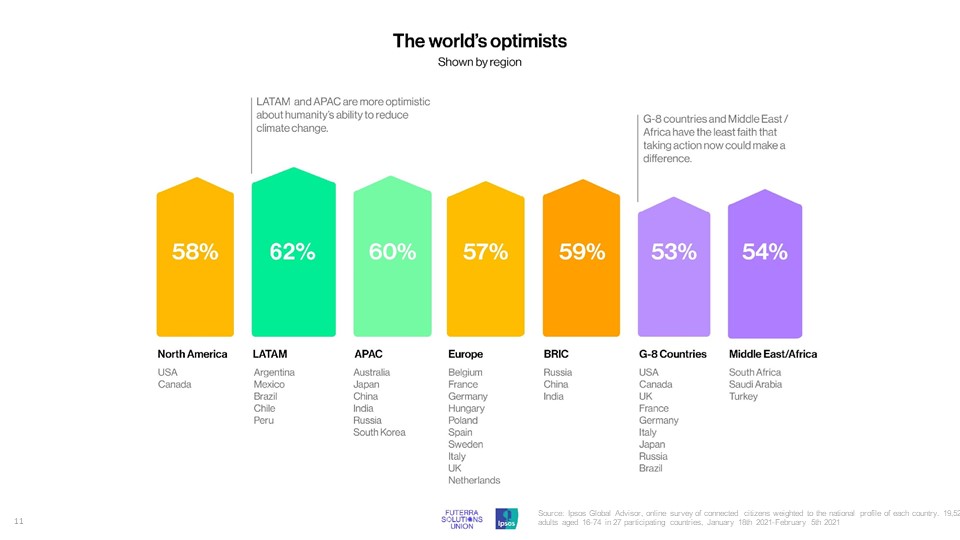 This ‘Optimism Gap’ is starkest when correlated with inequality. Within all countries, older, more educated and higher income citizens are more likely to feel optimistic, signalling a new intergenerational inequality of attitude underscored by wealth.

While more than half the world still believes we can do something about climate change (58%), the fatalism highlighted in this research may be underpinned by a torrent of doomsaying news stories. Citizens worldwide agree (62%) that they hear much more about the negative impacts of climate change than they do about progress towards reducing climate change, resulting in a perceived Solutions Gap.

While change has certainly been slow, this survey issues a stark warning about the new challenge of Climate Fatalism, and the self-fulfilling prophecy that fatalistic attitudes can bring about.

It is on all of us to help close the Solutions Gap and combat climate fatalism by telling the story of solutions.

If we make people fatalistic about climate change they simply will not act. Our research shows how the media contribute to an entirely fatalistic narrative –  and inaction. The lesson is that if we want to encourage action on climate change, we need to focus on solutions more than terrifying people about an existential threat.

“We need a solutions revolution, and we need it now. Because, to save life on Earth, we have to first believe we can.
It is clear from this research that young people in particular are developing a fatalistic attitude, which can be fatal for climate action. This is a dangerous development, as it is these young people who we need to believe in a cleaner future if it’s ever going to happen. Fatalism can become a self-fulfilling prophecy.
As a global society, we now need to obsess about the solutions – something we hope the world’s leaders gathered here in Glasgow will take on board.”