With less than six months to go before Scotland goes to the polls to elect a new Holyrood Parliament, our new poll for STV News shows the SNP still significantly ahead while the Scottish Conservatives have gained ground.

Among those likely to vote, 50% would cast their constituency vote for the SNP (down five points from August 2015), while 20% would vote for Scottish Labour (no change) with the support for the Scottish Conservatives just a further two points adrift on 18% (up six points). The Scottish Liberal Democrats remain at 7% support. 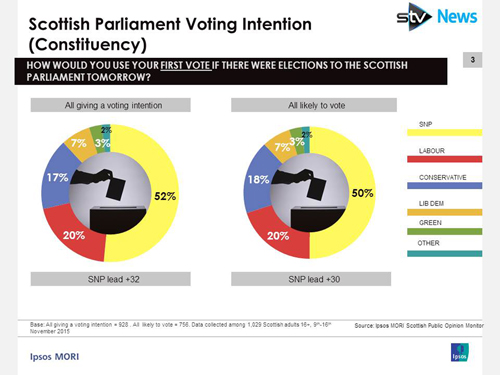 The pattern is similar for the party list vote, with 46% backing the SNP (down four points from August), while Labour drop one point to 19%. Again, the main beneficiaries are the Scottish Conservatives who gain four points and move to 16%. The Scottish Liberal Democrats register 8% support (up one point) with the Scottish Greens at 7% (down one point).

First Minister Nicola Sturgeon continues to be Scotland’s most popular party leader, although her personal ratings have dropped a little since August. Two-thirds of Scots (67%) are satisfied with her performance compared to 28% who are dissatisfied, giving a net satisfaction score of +39% (down 9 points). In line with Scottish Conservative support increasing, their party leader Ruth Davidson has seen a jump in net satisfaction ratings from +9% in august to +14% now. Scottish Labour leader Kezia Dugdale has also seen her personal ratings improve from +1% in August to +4% now.

On the issue of forthcoming referendum on Britain’s membership of the European Union (EU), almost two-thirds of Scots (65%) report that they would to remain in the EU with 22% voting to leave and 13% saying they don’t know. This contrasts with our latest GB-wide polling on the issue from August where support to remain in the EU was lower (52%) while 36% wanted to leave. 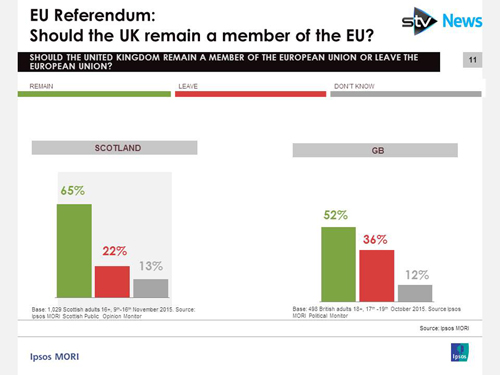 "This latest poll continues to show the SNP in a commanding position despite losing some ground after a bruising few weeks. Interestingly, it is the Scottish Conservatives who benefit and they are now seriously challenging Labour as the main challenger to the SNP ahead of the Holyrood vote next May. On the forthcoming EU referendum it is notable that opinion in Scotland is firmly in favour in the UK remaining part of the WU while opinion south of the border appears to be moving in the opposite direction. It does of course remain possible that the UK could vote to leave the EU against the wishes of Scottish voters, a scenario with implications for a possible second independence referendum."