In a new global survey by Ipsos to mark Earth Day 2021, in partnership with the Centre for Climate Change and Social Transformations (CAST), only 3 in 10 Britons (28%) agree that the Government has a clear plan for how it can work with business and the people to tackle climate change. A third disagree (33%).

While fieldwork was before the Government’s planned announcement that the UK’s net zero emissions target will be brought forward from 2050 to 2035, so far, looking across different markets around the world, net zero legislation seems to make little difference to public agreement that governments have a clear plan to tackle climate change.  For example, despite the UK government having been the first major economy to pass net zero emissions law back in 2019, agreement that the Government has a clear plan is no higher in Britain than the Global Market Average (31%). 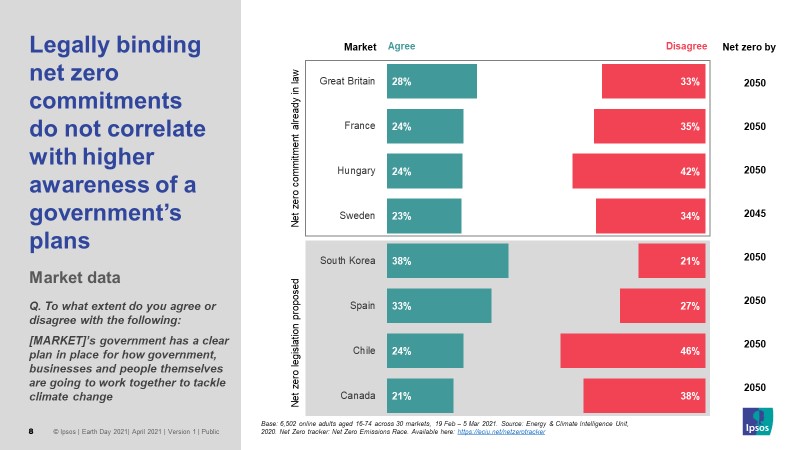 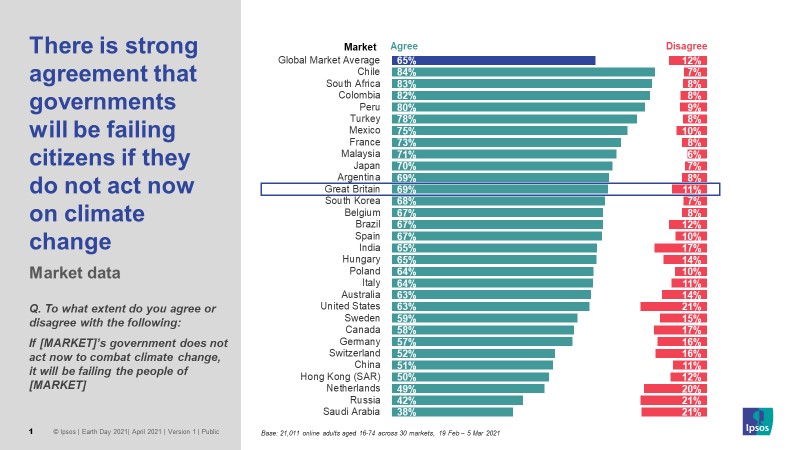 Similar proportions believe businesses and individuals also have a responsibility to act now. Three-quarters (74%) say businesses must act now to avoid failing their customers and employees while 73% believe individuals will be failing future generations if they do not act now to combat climate change. 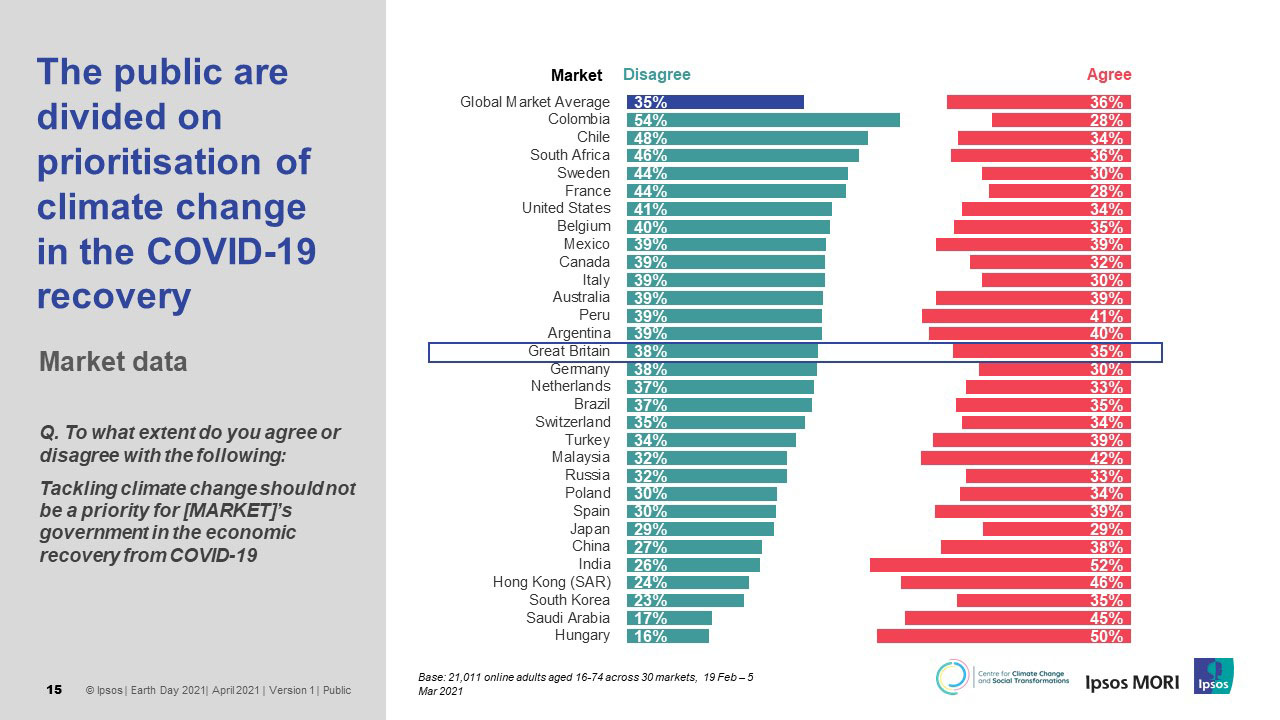 Once COVID-19 restrictions are removed from everyday life, some people expect their behaviours to change in various ways, compared with before the pandemic, while others expect little difference – but few think they will revert to less sustainable habits. Britons are most likely to do what they can to avoid throwing away food more often than before the pandemic (36%) and only buy things they really need rather than shopping for things for fun (32%). Three in ten (30%) say they will do more errands by foot or bike rather than by car while a quarter expect to work from home more often (26%) or buy things they need second hand (24%). One in five (21%) say they will go on holidays that do not require a flight more often than before once restrictions are lifted.

A large majority of Britons say they understand what action they need to take to play their part in the fight against climate change (71%), only 9% disagree, although Ipsos Perils of Perception research suggests in reality we do not always know what will make the biggest difference.

When considering how they can change their actions to limit the effects of climate change, Britons are most likely to avoid products with a lot of packaging (55%) and avoid buying new goods, instead mending items they have or buying second hand (49%). 46% say it is likely they will save more water at home, while the same proportion say they will save more energy. Around 4 in 10 (42%) say they are likely to walk, cycle or use public transport instead of driving a car or motorbike.

Recycling materials such as glass, paper and plastic is likely to be done among 38% of people, 36% say it is likely they will avoid flying, instead travelling by bus or train.  Both of these though are below the global market average of 50% and 45% respectively.

On the eve of Earth Day 2021, our latest survey shows that there is still a lack of awareness of how the Government plans to bring all groups in society together to tackle climate change, despite the UK’s commitment to net zero and Paris Agreement targets, and hosting of COP26 later this year.  This is important because although many Britons say they understand what actions they need to take to tackle climate change, they tend to focus on lower impact actions rather than more significant lifestyle changes.  Nevertheless, there is a willingness to change certain behaviours that will make a difference, and the strong sense of responsibility individuals feel they have – along with business – to combat climate change suggests they will be receptive to Government steps to reduce the UK’s greenhouse emissions.

These new survey findings highlight that the COVID-19 pandemic has not dented public concern about climate change, and that there is a strong belief that responsibility for tackling climate change is shared by everyone in society. It is also encouraging that many people are keen that the lifestyle changes they have made during COVID-19 restrictions – like reducing travel, consumption and food waste – endure or increase after restrictions are lifted. We now need policies to support and lock in these positive habits, as well as clearer messaging about which behaviours are most effective and what the UK’s plans are for tackling climate change.