Britons’ economic optimism has fallen substantially in the last month, though more still think the economy will improve than that it will get worse, Ipsos’s December Political Monitor reveals. One in three (35%) think that the economy will improve over the next 12 months, compared to 30% who think it will get worse (the same proportion thinks the economy will stay the same). This gives an Ipsos Economic Optimism Index score (% improve minus % get worse) of +5, the lowest score since July of last year. This is down from a score of +19 last month and a sizeable fall on May’s all-time peak of +35 (53% improve, 18% get worse). 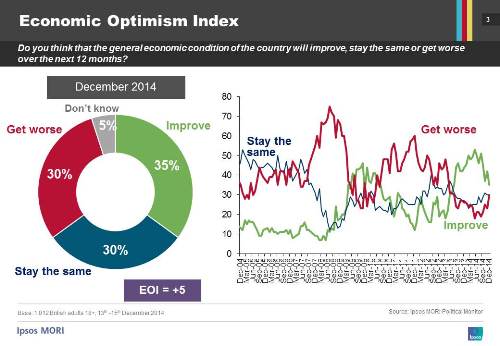 Following the Autumn Statement and the ensuing debate over the size of potential spending cuts needed in the next Parliament in order to reduce the deficit while not damaging public services, public attitudes to the parties’ approaches to public spending are mixed. Nearly six in ten Britons (57%) think the Conservatives will cut spending too much if they are in government following the General Election. Only a quarter (26%) think the same of Labour. However, it’s not all good news for the opposition; one in three (35%) think Labour will cut spending too little in the next parliament, compared with 10% for the Conservatives. A quarter each think the Conservatives (26%) and Labour (27%) will get the balance about right on spending cuts to reduce the deficit while protecting public services. 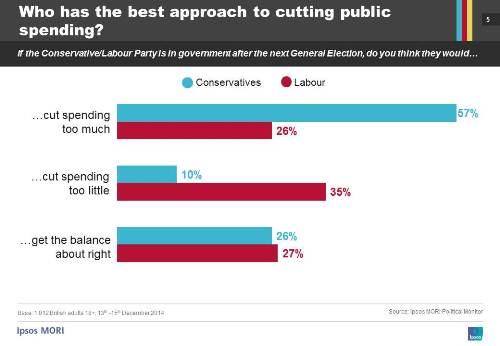 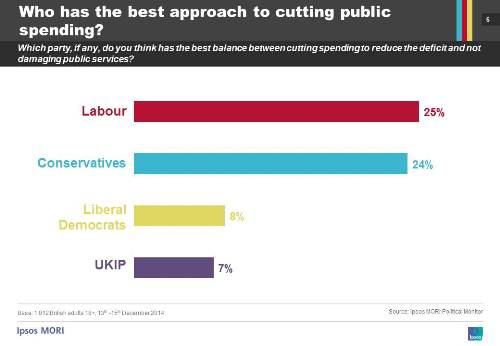 “2014 is still the only year since it started in 1979 that our Economic Optimism Index has been positive every single month, so we've not dipped into negative territory yet, but the summer’s record optimism has not lasted as we go into Christmas.  What’s clear, though, is that neither of the main parties is seen by the public as having all the answers – both are struggling to get the balance right.”