Support for the Labour Party is at the lowest level since the final days of Gordon Brown’s premiership, November’s Ipsos Political Monitor reveals. Labour are down four points to 29%, their first score below 30% of the vote since before the last general election, while the Conservatives are up two points to 32%, giving them a three-point lead - the biggest lead we have recorded for the Conservatives since October 2010. This is a turnaround since last month, prior to recent media rumours of a Labour leadership challenge, when Labour held a three-point lead on 33% over the Conservatives’ 30%. UKIP are down two points from last month’s high on 14%, while the Liberal Democrats are up one point to 9%. 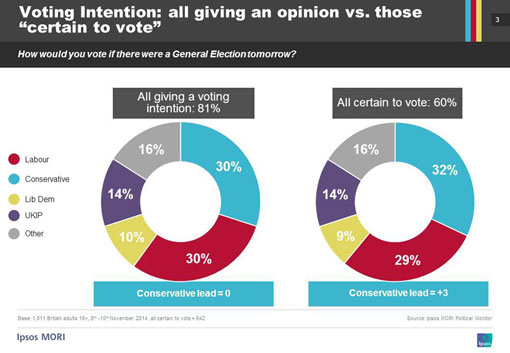 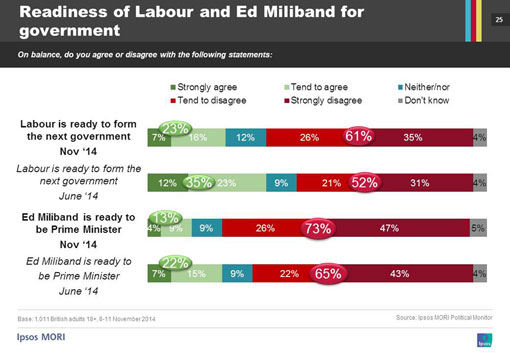 One in four (23%) think the Labour Party is ready to form the next government, while 61% disagree; this is the lowest score for an opposition party since the Conservatives in September 2003 in the penultimate month of Iain Duncan Smith’s party leadership, when 21% thought the party were ready. This is down from 35% agreeing Labour were ready to govern in June this year, when 52% disagreed. One in four (27%) Labour supporters currently believe that Labour are not ready to form the next government, with 57% saying they are ready.

Satisfaction in Ed Miliband as Labour leader is at its lowest level, with 21% satisfied in his performance and 65% dissatisfied, giving him a net rating (% satisfied minus % dissatisfied) of -44. This is the lowest level of satisfaction in any Labour leader since Gordon Brown at the height of the economic crisis in July 2008, who received the same score.

The last Labour leader to have a lower satisfaction score than Mr Miliband was Michael Foot in the days following Margaret Thatcher’s landslide victory in the 1983 general election. His satisfaction rating is now lower than for Nick Clegg, for the first time since January 2012. 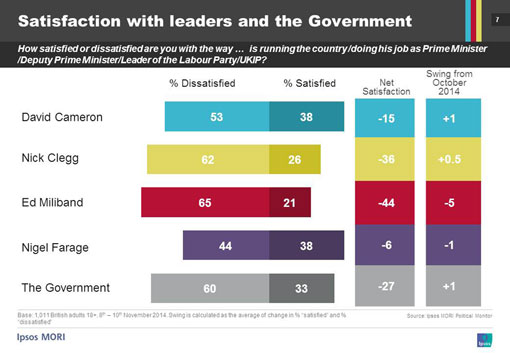 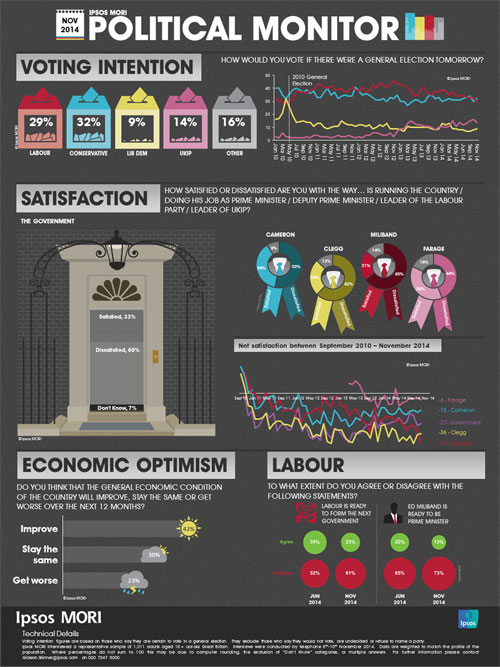 “The interviewing for this poll was conducted at the height of the very public discussion of a possible challenge to Ed Miliband’s leadership of the party – and it looks like it’s had a significant effect on public opinion. The Labour leadership will clearly hope that this marks a low point - they’ve lost the lead to the Conservatives in overall voting intention, but they’re still within touching distance, which is quite remarkable given the relentlessly negative coverage.”

Ipsos interviewed a representative sample of 1,011 adults aged 18+ across Great Britain. Interviews were conducted by telephone 8-10 November 2014.  Data are weighted to match the profile of the population.