A new survey by Ipsos finds public backing for actions by the government to encourage cycling and public transport. However, the study also finds a strong attachment to car use and ownership, as well as weakening support for schemes that charge motorists more for road use to improve the environment.

Four in ten UK adults (44%) say they would like to cycle more than they currently do. However, a similar proportion (47%) agree that ‘I’m not the kind of person who rides a bicycle’.

The appetite to cycle more varies by age and gender and according to existing access. Those aged between 25 and 34 (58%) were much more likely than those aged 55+ (32%) to want to cycle. Men (50%) are also more likely to want to cycle than women (39%). Two-thirds (66%) of those who currently have access to a bike say they would like to cycle more. Levels of interest are similar in urban and rural areas. 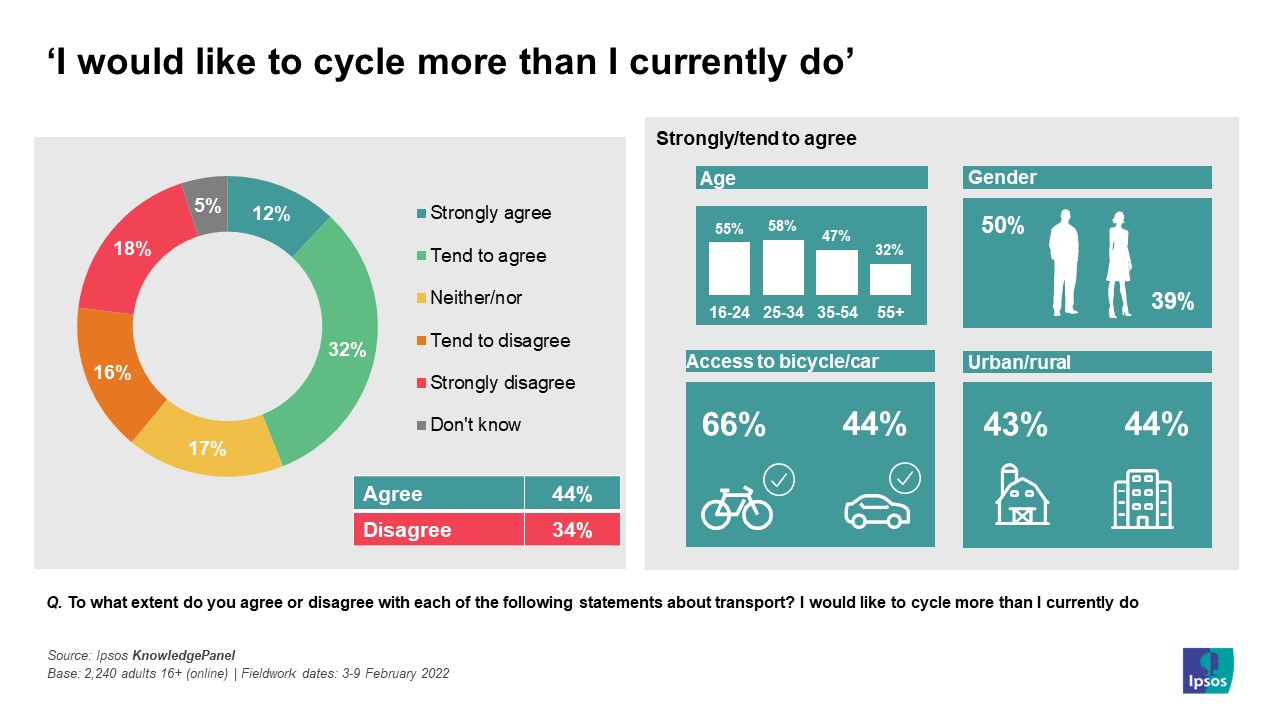 Two-thirds (64%) of people agree that it is ‘too dangerous to cycle on the roads’ including a quarter (26%) who agree strongly. Women are much more likely to perceive the dangers of cycling than men, with 71% of women agreeing compared with just 57% of men.

Seven in ten (71%) say they support actions to encourage more people to walk or cycle instead of driving a car to reduce the UK’s carbon emissions. Two-thirds (65%) would support encouraging more people to use public transport rather than driving a car for these reasons, and three in five (57%) would support actions to encourage greater use of ‘car-pooling’.

But seven in ten (71%) feel they need a car to suit their current lifestyle, rising to 86% among those who have access to one - and by a margin of nearly two to one reject the notion that it is less important to own a car nowadays (59% compared with 21%).

More than half, 55%, say there is too much traffic congestion in their local area (23% disagree). A smaller proportion, 45%, are in favour of schemes which would charge road users a fee to drive around towns and cities to reduce congestion and improve the environment, 33% oppose such schemes in principle.

There has been a significant drop in levels of support for the schemes in principle since November 2020. This has declined 17 percentage points since then while opposition has increased by 12 percentage points.

People living in households without access to a car are relatively more positive about road charging policy - 51% of this group support such a policy - but those who do have access to a car were more supportive than opposed - 44% compared with 35%. People living in Scotland were more likely to oppose road pricing schemes (41%) than those in England and Wales (33% and 24%).

While there has been a decline in support since late 2020, the public remain much warmer to the policy than they were in 2007*. Levels of support and opposition in 2022 are almost the inverse of those in 2007 when a third (33%) were supportive and half were (48%) opposed.

Six in ten people, 62%, support the encouragement of the use of electric vehicles instead of petrol or diesel vehicles to reduce the UK’s carbon emissions but are more likely to oppose (45%) than support (31%) only allowing access to certain town and city centres to electric or hybrid cars or vans on some days.

A third, 33%, oppose introducing ‘Low Traffic Neighbourhoods’ (LTNs), areas where bollards, planters and roadblocks are installed to stop motor traffic using some local roads, but 42% say they support these.

Christian Easdown, Associate Director, Public Affairs at Ipsos in the UK said of the findings:

Superficially, there is considerable appetite among many people to adopt more sustainable travel behaviours such as walking, cycling or using public transport over driving a car. But there are significant barriers to this happening in practice – for example, most people think our roads aren’t safe for cyclists.
The public say they want to see more encouragement to cycle and back the adoption of electric vehicles but are cooler on the imposition of restrictions and charges for car use even if this reduces congestion and improves the environment.
It remains to be seen if the ‘cost of living’ crisis and sensitivities about interventions being ‘anti-car’ make a difference to public opinion too.