One in three Britons think the UK’s handling of the COVID-19 crisis has had a negative impact on the country’s international reputation, while concerns about opening up to the world have increased since before the pandemic began, according to new research.

The findings, from a survey to mark Professor Devi Sridhar’s Fulbright Distinguished Lecture on “preventing the next pandemic”, reveal that Britons are more likely to think the UK’s handling of the COVID-19 crisis has damaged rather than improved the nation’s standing, with 36% saying it has a negative impact on the UK’s reputation around the world, compared with 21% who think it has had a positive impact and 31% who think it has made no difference. 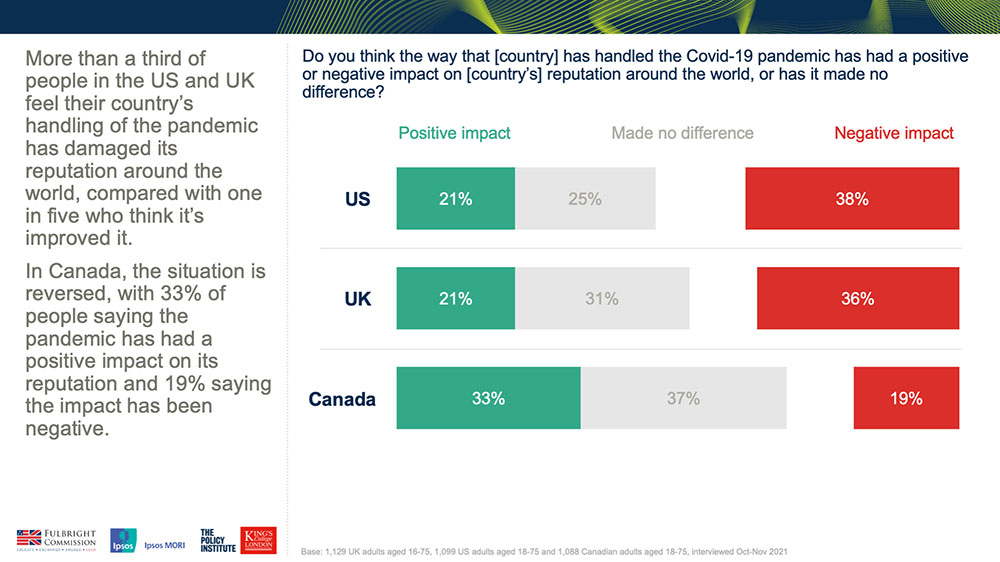 Produced by the Policy Institute at King’s College London and Ipsos, the figures put the UK on a par with the United States in terms of how negatively its COVID response is viewed by its own citizens. In the US, 38% think the country’s handling of the pandemic has had a negative impact on its international reputation, while 21% think its impact has been positive and 25% feel it has had no effect.

Both the US and UK fare worse on this measure than Canada, where people are more likely to say the pandemic response has improved the country’s reputation than damaged it (33% vs 19%) and also more likely to say it’s made no difference (37%).

36% of Britons now agree more with the view that the country should take further steps to protect itself from today’s world – up from 23% in 2019.

Correspondingly, the proportion who lean more towards thinking the UK should further open itself up to today’s world has declined from 41% to 31% over the same period, meaning slightly more people are now against greater openness than are in favour of it – a reversal of the situation in 2019.

However, compared with Americans (18%) and Canadians (24%), Britons (31%) still agree more with the view that their country needs to open itself up to today’s world.

And people in the US are by far the most likely to think their nation should do more to protect itself, with a majority of 55% holding this view.

People in both the UK and the US are relatively split on whether their countries should prioritise working closely with other nations to tackle COVID together or combatting the virus at home.

36% of Britons and 34% of Americans agree more with making international cooperation the priority – but at the same time, 31% in both nations think the focus should be on measures at home to tackle the pandemic in their own country.

By contrast, in Canada, people are more likely to think close international working (34%) should be prioritised over measures in their own country (25%).

A majority in Canada, the UK and the US think their nation should work more closely with other countries on other global health issues, such as access to medical products and potential future pandemics, than it did pre-COVID.

55% or more of people in all three countries feel this way, with only small minorities holding the opposing view and around a quarter saying the level of international cooperation should remain the same as it was before the crisis.

Devi Sridhar, Professor of Global Public Health at the University of Edinburgh, said:

These latest results show that that although concerns about opening up to the world have increased in the UK and US recent years, most people still think greater cooperation between nations on global health issues is a good thing. We can see how international cooperation can create momentum in tackling financial crises and climate change. However, this has not been the case for COVID-19 with many countries going it on their own and not learning from others, which has meant the pandemic has been prolonged. To prepare and overcome the next pandemic it is imperative that we work multilaterally.

The public in the UK and the US seem in two minds on whether each country should hunker down and protect themselves, or reach out to the rest of the world, now the COVID-19 pandemic has shown how connected we are. But it’s actually an understandable response – people feel like we should think of ourselves first in the current crisis, but work with others to help prevent future global health challenges. That makes sense: the pandemic has shown how disconnected our plans and response are, and hopefully lessons will be learnt for the future – but we shouldn’t count on it without continued effort, as we tend to always focus down on the immediate when we’re dealing with a crisis and its aftermath.

The concerns about global health issues such as the pandemic have clearly sunk in with the public in the UK, who are now more likely to believe that the country should take further steps to protect itself from today’s world. And whilst there is that concern among the public about opening up to the rest of the world too much given the potential pandemic risks, there is a very clear sense among Britons that we should be working more closely with other nations when it comes to other global health issues, highlighting the support for a multilateral approach to such issues.

Professor Sridhar will deliver the 2021 Fulbright Distinguished Lecture at 17:00 on Friday 19 November. The title of her talk is “Preventing the Next Pandemic: What have we learned about international health collaboration and what needs to change?”