As Parliament gets ready to vote on the Withdrawal Agreement next week Ipsos’s new Political Monitor reveals most of the public believe withdrawing from the EU on its terms will be bad for Britain. The poll shows six in ten (62%) think withdrawing under this deal will be bad for the UK as a whole (25% say good), including 47% of Conservatives (40% of whom think it would be good). This is worse than the reaction to the Prime Minister’s Chequers deal in July when 47% thought it would be bad for the country.

Theresa May also failed to meet the expectations of the public with her deal. Half (51%) say the agreement is worse than they expected at the time of the referendum. Just 4% think the deal is better than their expectations while two in five (39%) say it’s about the same as they expected. Seven in ten (69%) also say that they are not confident that Theresa May has got a good deal for Britain in the negotiations with other European leaders (including 54% of Conservatives) while a quarter (23%) say they are confident – although this is a slight improvement from last month. 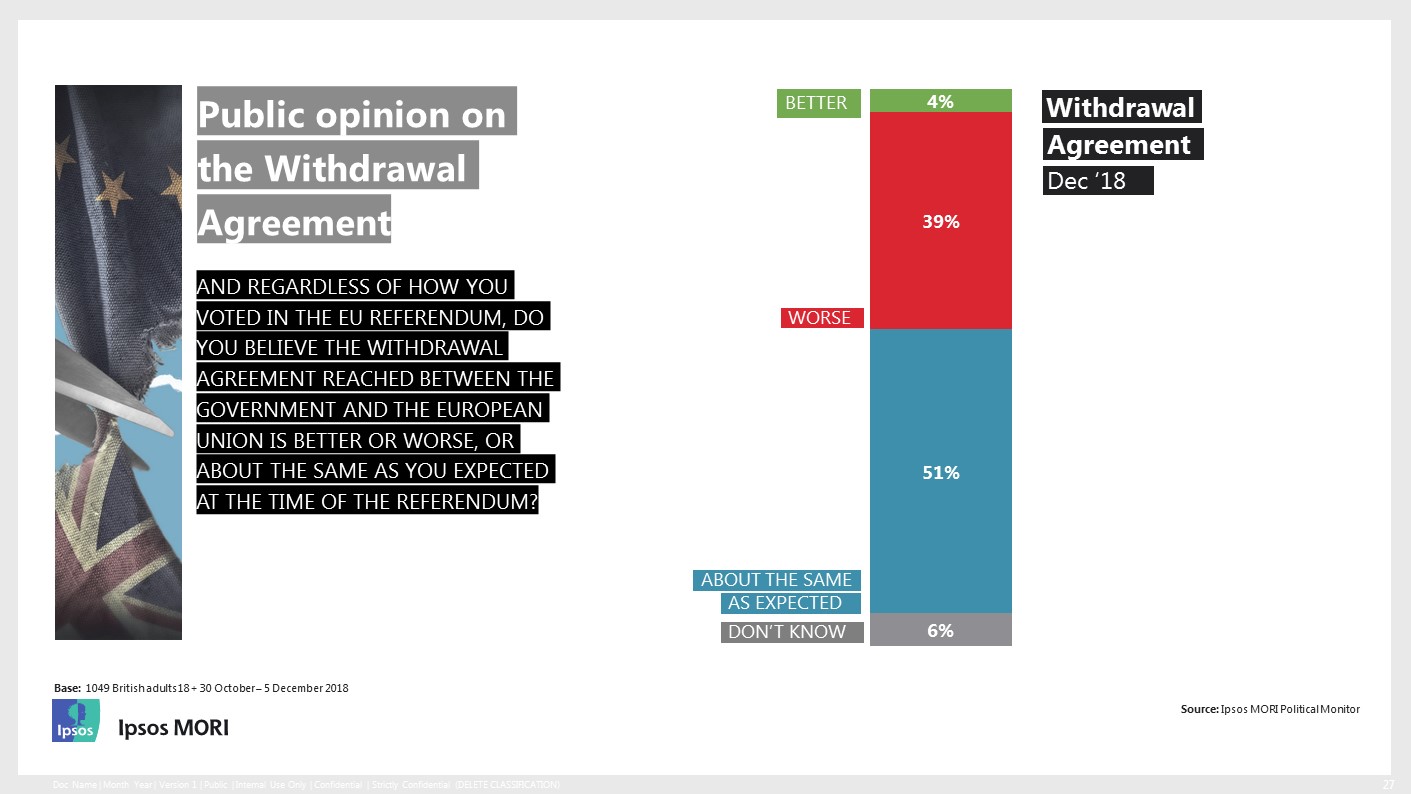 If Theresa May fails to get her Withdrawal Agreement passed in Parliament the public are split on what they most think the Government should do next.  Three very different options are each picked by one in five: calling a new Remain vs. Leave referendum, that Britain should simply leave the EU without a deal, or that the Government should ask for the EU to re-open the negotiations to seek a different deal. Less popular ideas include calling off Brexit altogether without a vote (11%), calling a General Election (10%), calling a referendum on the withdrawal agreement (10%), or holding a second vote in Parliament (6%). 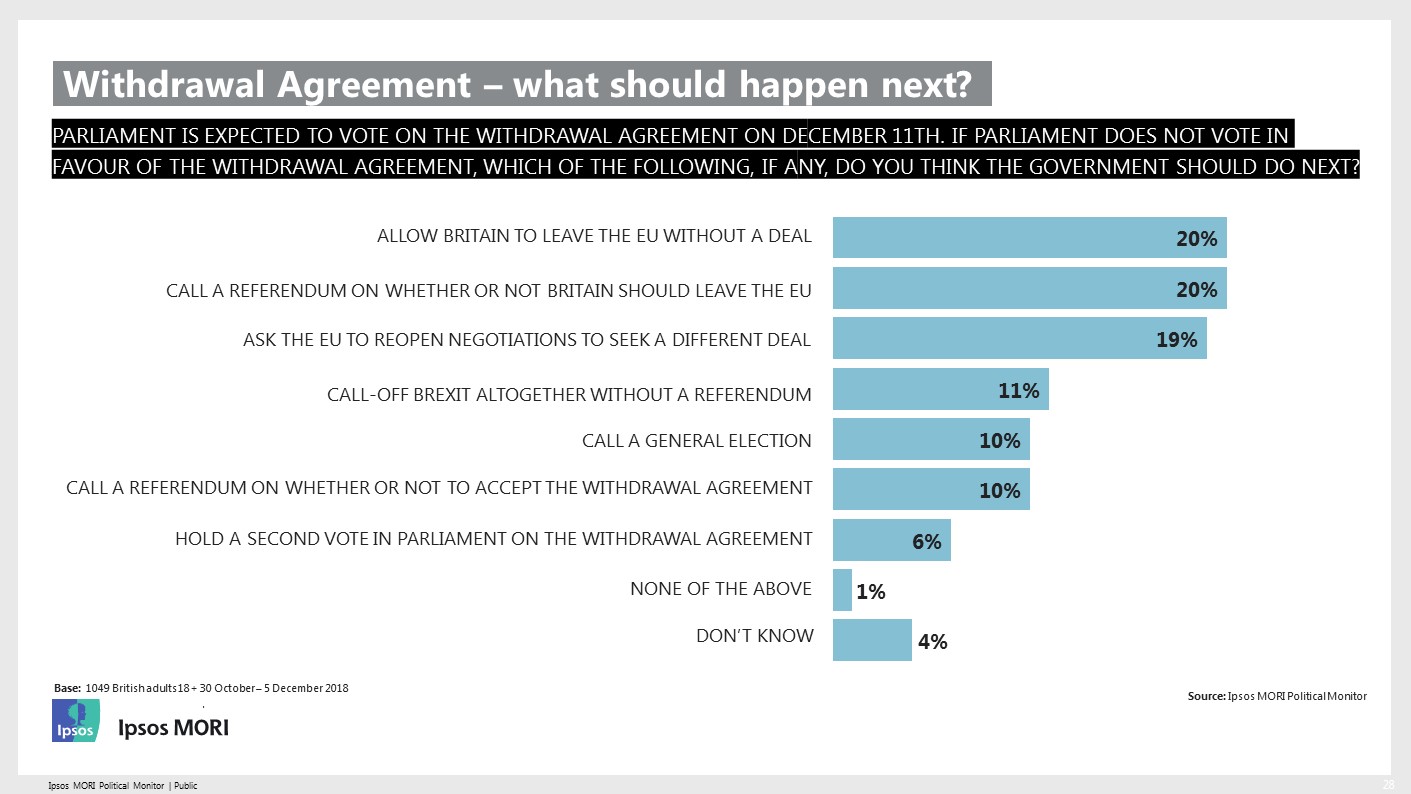 If the vote does fail to pass in Parliament half (50%) think that Theresa May should continue as Prime Minister (including seven in ten (72%) of Conservative supporters), 43% overall say that she should resign. 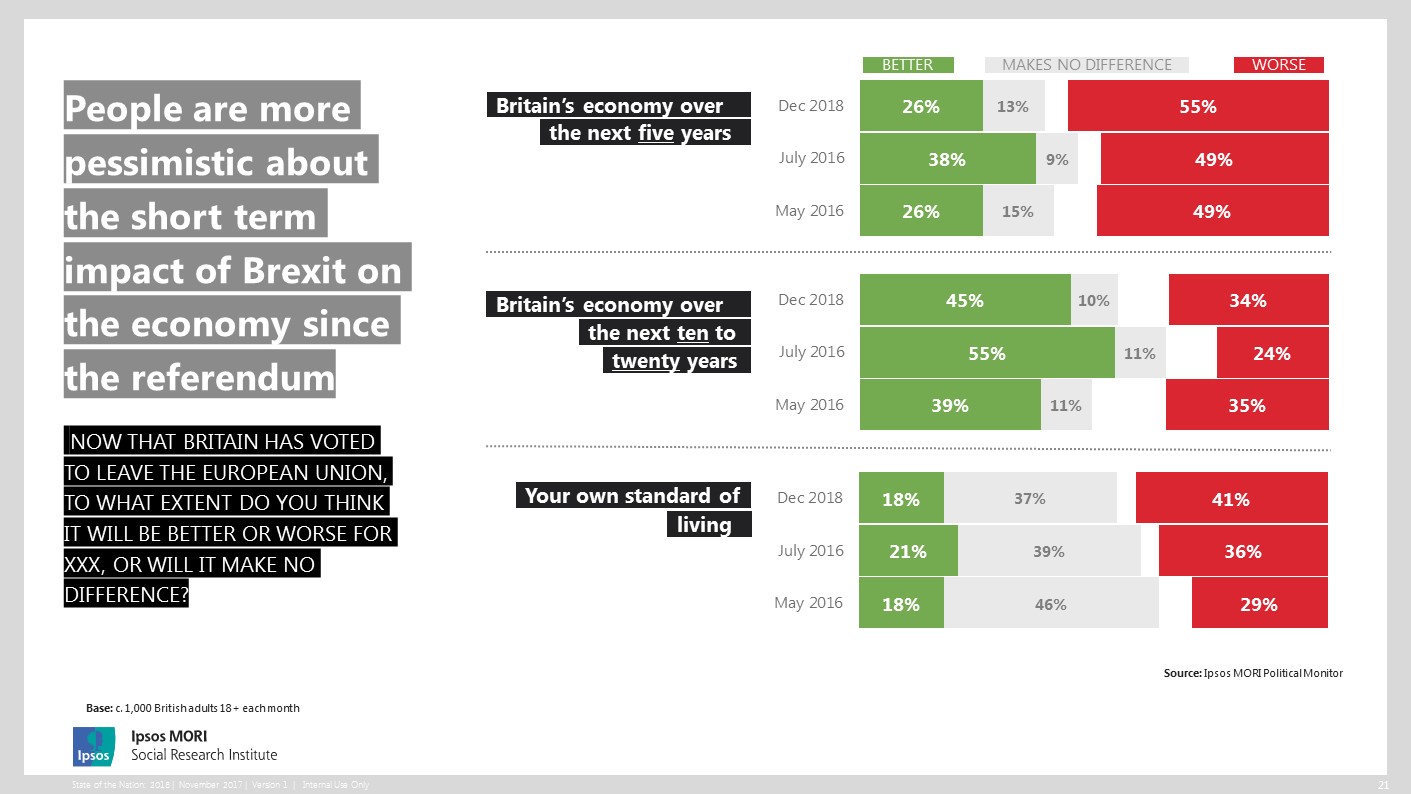 Despite the televised debate between Theresa May and Jeremy Corbyn being cancelled the new poll shows that the public would have taken an interest in watching it, although it might not have been very important to their views. Six in ten (58%) say they would be interested in watching the debate, but a third (35%) think that it would be very or fairly important in making up their minds about Britain’s future relationship with the EU.  (For historic comparison, in 2010 60% said the first leaders’ debate would help them make up their minds how to vote in that election.)  The public were split on who would be most convincing, 40% backed Theresa May and 36% Jeremy Corbyn.

Overall Britons remain pessimistic about the health of Britain’s economy. The latest Economic Optimism Index shows six in ten (61%) believe it will get worse over the next 12 months, 14% think it will improve and 19% think it will stay the same – leaving an EOI score of -47 (no change from last month).

Despite a difficult week selling her withdrawal deal Theresa May has seen some improvement on her leadership satisfaction ratings. A third (35%) are satisfied with the way she is doing her job (up 6 points) while 57% are dissatisfied (down 4 points), leaving her a net satisfaction score of -22. She’s also improved amongst Conservative supporters from 57% last month to 66% now.   Jeremy Corbyn’s scores however have seen little change overall from last month – 27% are satisfied and 59% dissatisfied, giving him a net satisfaction score of -32.  His ratings among Labour supporters have fallen from 59% to 49%.   A quarter (24%) are satisfied with Vince Cable as Liberal Democrat leader (up 5 points) while 38% are dissatisfied (no change) – two in five (42%) say they don’t know.

Our ongoing figures for voting intentions show the two main parties running neck-and-neck. The Conservatives and Labour are both on 38% while the Liberal Democrats are on 9%, Greens on 5% and UKIP on 4%.

Politicians grappling with Brexit aren’t going to find any easy answers in public opinion.  Unfortunately for Theresa May, reaction to her Withdrawal Agreement is now worse than it was for the Chequers plan over the summer, even though there is some sympathy for how she is handling her situation.  But there is little consensus among the public over the best approach to take if her deal falls.  Much of this can be traced back to the different motivations people had for voting remain or leave in the first place – concern about the short-term economic impact of Brexit has grown since the referendum, but people still think it will be good for Britain’s sovereignty, including over EU immigration.

Ipsos interviewed a representative sample of 1,049 adults aged 18+ across Great Britain. Interviews were conducted by telephone 30th November – 5th December 2018.  Data are weighted to the profile of the population. All polls are subject to a wide range of potential sources of error. On the basis of the historical record of the polls at recent general elections, there is a 9 in 10 chance that the true value of a party’s support lies within 4 points of the estimates provided by this poll, and a 2 in 3 chance that they lie within 2 points.