Ipsos has conducted a poll for Nick Robinson’s new programme on Radio 4 considering Britain’s place in the world. The research reveals that two in five (40%) Britons are optimistic about the future, believing in twenty years’ time that Britain will be “Global Britain” and a country that plays an important role in the world. However, not everyone is convinced with a sizeable one in four (26%) saying the opposite – “Britain will be a small island that very few other countries pay attention to”.

Voters who backed Boris Johnson’s Conservatives at the last election are more optimistic about Britain’s future. Three in five (59%) 2019 Conservative voters think “Global Britain” is possible, which is near twice the proportion of 2019 Labour voters who say the same (31%). 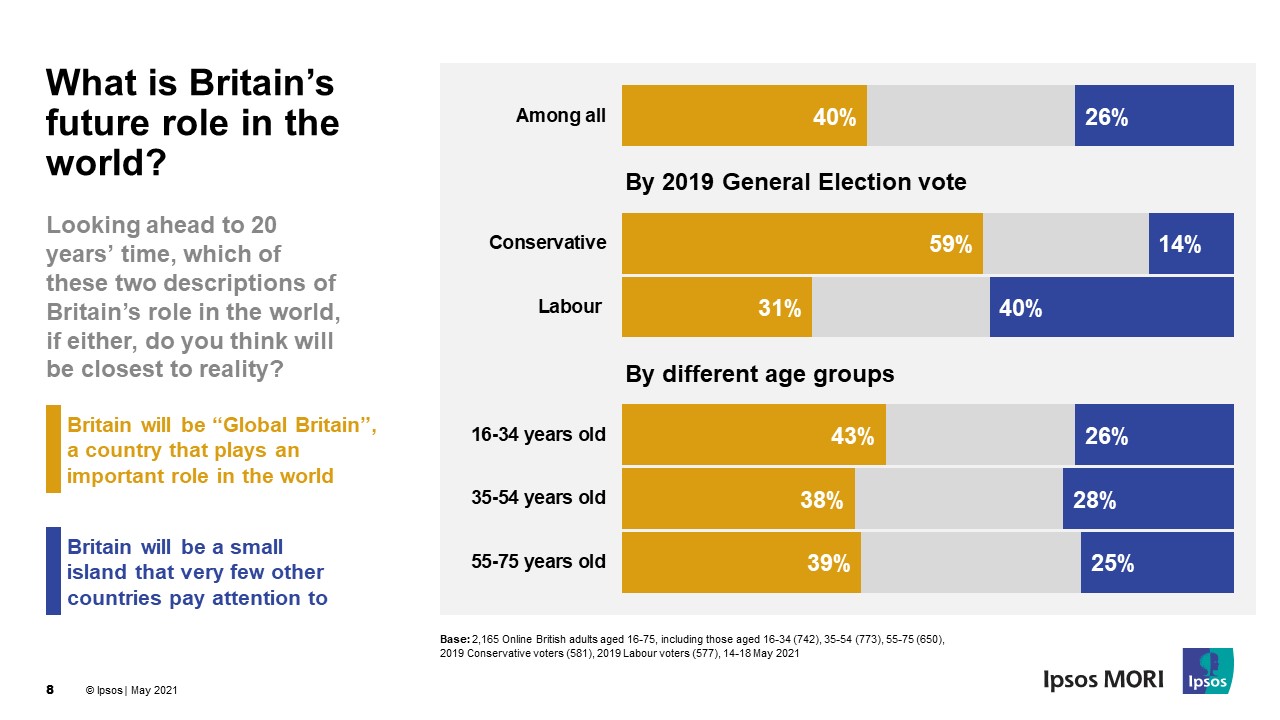 Elsewhere, the majority of Britons think there are circumstances when the army should intervene abroad. Around a third (33%) say it is justified but “only when Britain’s interests are directly threatened”. Whilst a similar proportion (27%) say “only when other people’s right and freedom are threatened”. Just 16% say the armed forces “should not intervene abroad and only be used to defend British territory”.

Looking at regular trackers running since 2016:

Listen to the programme on the BBC iPlayer or the BBC Sounds app.

Overall, the British still want to matter globally. By two to one we want to punch above our weight in world affairs.  The young are more willing to accept a smaller role for Britain, but overall only 26% think we will be a small island no one listens to. Matching our ambition to our resources remains a central challenge.

Ipsos interviewed a representative sample of 2,165 British adults aged 16-75. Interviews were conducted online from 14-18 May 2021. Data are weighted to match the profile of the population. All polls are subject to a wide range of potential sources of error.