New polling from Ipsos for BBC Newsnight and the Health Service Journal finds support in England for the planned junior doctors’ strikes, as long as emergency care is still provided. The survey of 869 adults in England finds a clear majority (66%) support junior doctors striking as long as emergency care is provided. More than two in five (41%) say they are strongly supportive. Conversely, only 16% oppose the strikes. 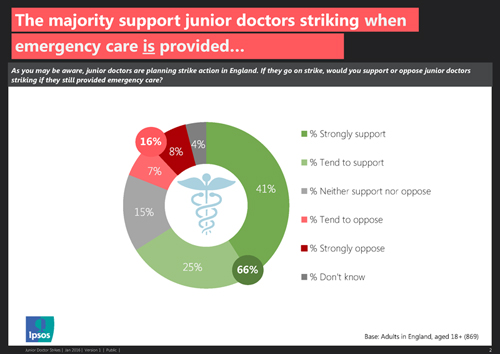 Junior doctors are planning to strike over changes to their overtime pay tomorrow (Tuesday 12 January) and on Tuesday 26 January, but will provide emergency care cover on these days. A further planned day of strike action on Wednesday 10 February will see a full walk-out, with no emergency cover being provided.

When emergency care provision is not part of the terms of the strikes, support dips significantly to 44%, with opposition rising to 39% of the public. A quarter (24%) of the public still strongly support strike action, even if emergency care isn’t provided. 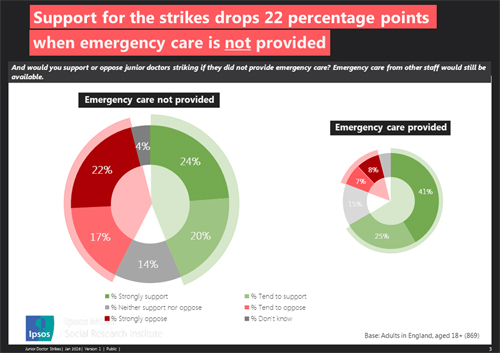 When asked why junior doctors are planning to strike, pay and working conditions feature highly. The most commonly mentioned reason is long working hours (46%), followed by pay generally (27%) and because junior doctors specifically are poorly paid (24%). Very few mention issues regarding the safety of patients (2%) or healthcare staff (1%), showing that public understanding of the reasons for the strikes are limited to the issues affecting doctors’ pay and conditions, rather than the potential ramifications on standards of healthcare. 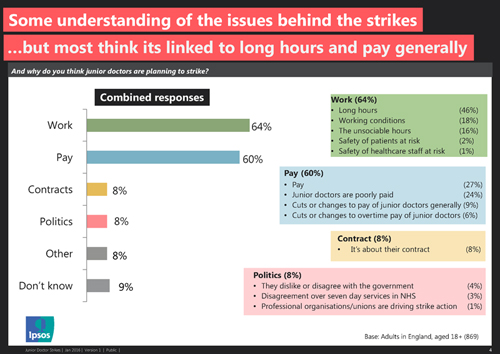 Commenting on the findings, Anna Quigley, Head of Health Research at Ipsos, said:

“Interestingly those who support the strike are more likely to talk about the long and unsociable hours worked by doctors rather than pay, which is mentioned as much by those who oppose the strike as support it. This could suggest that arguments about the demands on doctors are more convincing than arguments over pay. The dip in support for strikes when emergency care isn’t provided could be an indication that the government’s argument that the strikes could put patients at risk has achieved some cut through with the public.”

Ipsos interviewed a representative sample of 869 adults in England, aged 18+. Interviews were conducted over the telephone between 8 and 10 January 2016. Data are weighted to match the profile of the population.