Ipsos’s Political Monitor reveals low levels of public confidence in the Prime Minister to get a good Brexit deal, while over eight in ten think the government is doing a bad job handling Brexit, and over eight in ten are dissatisfied with the way the government is running the country overall – figures only equalled in Ipsos’s forty-year time series by John Major’s government.  The data shows only around one in five Britons (18%) are confident Theresa May will get a good deal for Britain out of the EU negotiations –  four in five (79%) lack confidence. 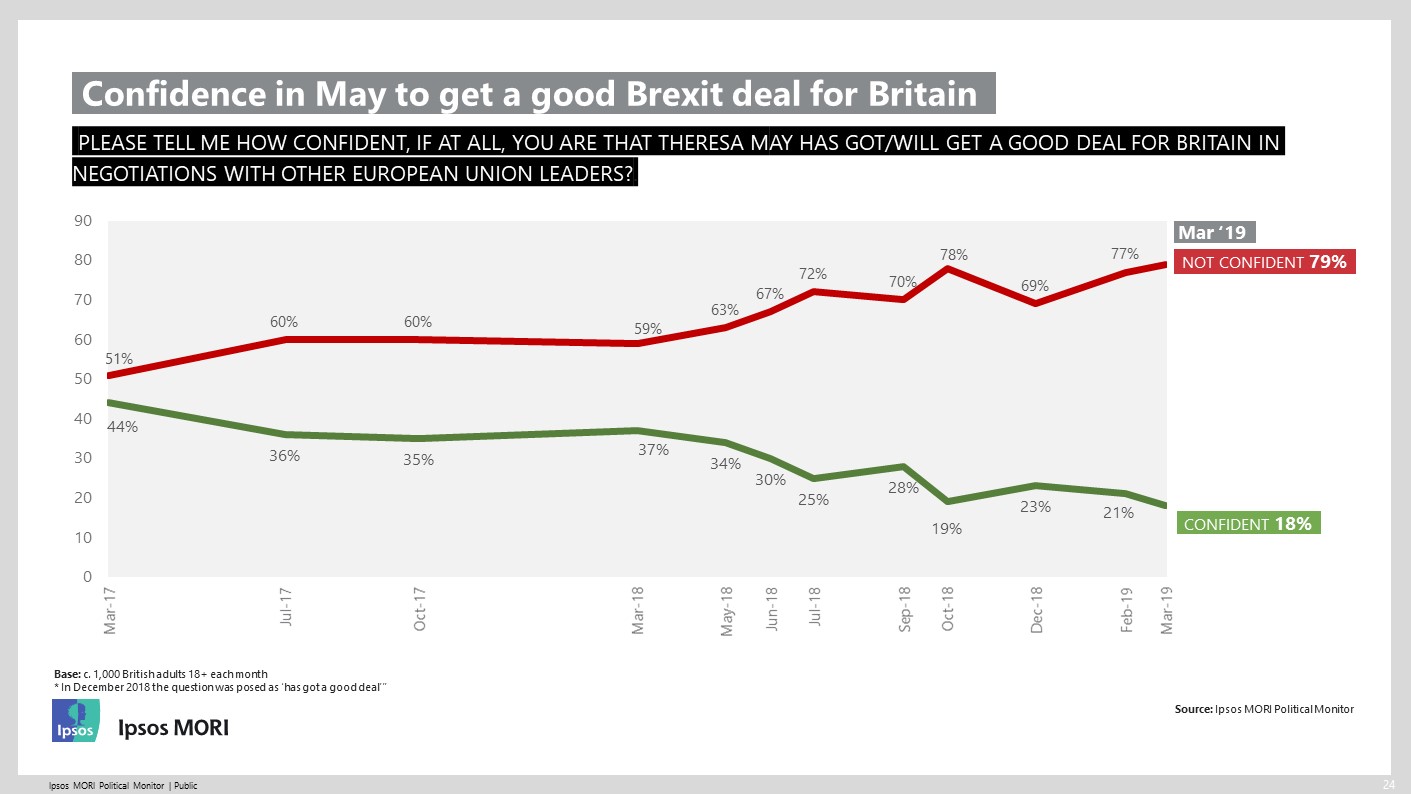 Even among Conservative supporters three in five (60%) are doubtful she will get a good deal. Despite these poor figures confidence is not much higher in Jeremy Corbyn if he were Prime Minister – 21% would be confident in him to get a good deal with two-thirds (76%) with little confidence.

And if no agreement is reached on the terms of Britain’s future relationship with the EU by 29th  March, the UK Government and Conservative MPs get much of the blame. Nearly half (48%) say the Government would be to blame (up from 35% in December) followed by 35% saying Conservative MPs would be to blame (up from 31%). A third (32%) would blame the EU (up from 27%) while 28% would blame Brexit campaigners (down from 35%). A quarter (23%) would blame the Labour Party and Remain campaigners while 10% would blame other opposition parties.

The new poll also shows little change in the public’s perception of the impact of Brexit on Britain’s economy and sovereignty: 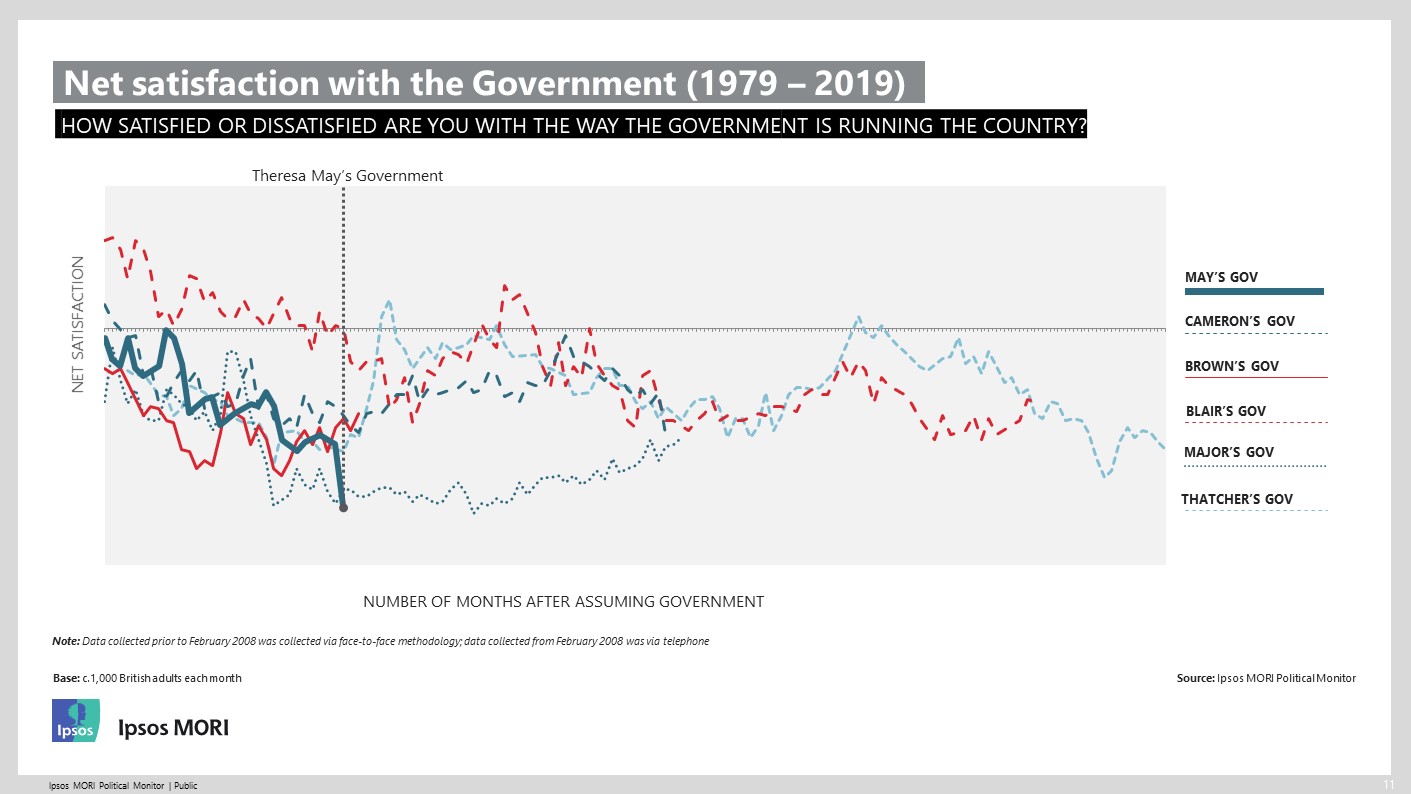 Conservative supporters remain positive on balance about Theresa May with 63% saying they’re satisfied in her, but they are less happy with the government overall – 71% are dissatisfied (up 24 points).

Britons continue to be pessimistic about the state of the country’s economy. The latest Ipsos Economic Optimism Index shows 58% believe it will get worse over the next 12 months, 16% think it will improve and 20% it will stay the same – leaving an EOI score of -42, the same as last month.

Our ongoing vote intention scores show the Conservatives with a small lead over Labour with the Conservatives at 38% (no change), Labour at 34% (down 4 points), the Liberal Democrats at 8% (down 2 points), and UKIP on 7% (up 3 points). 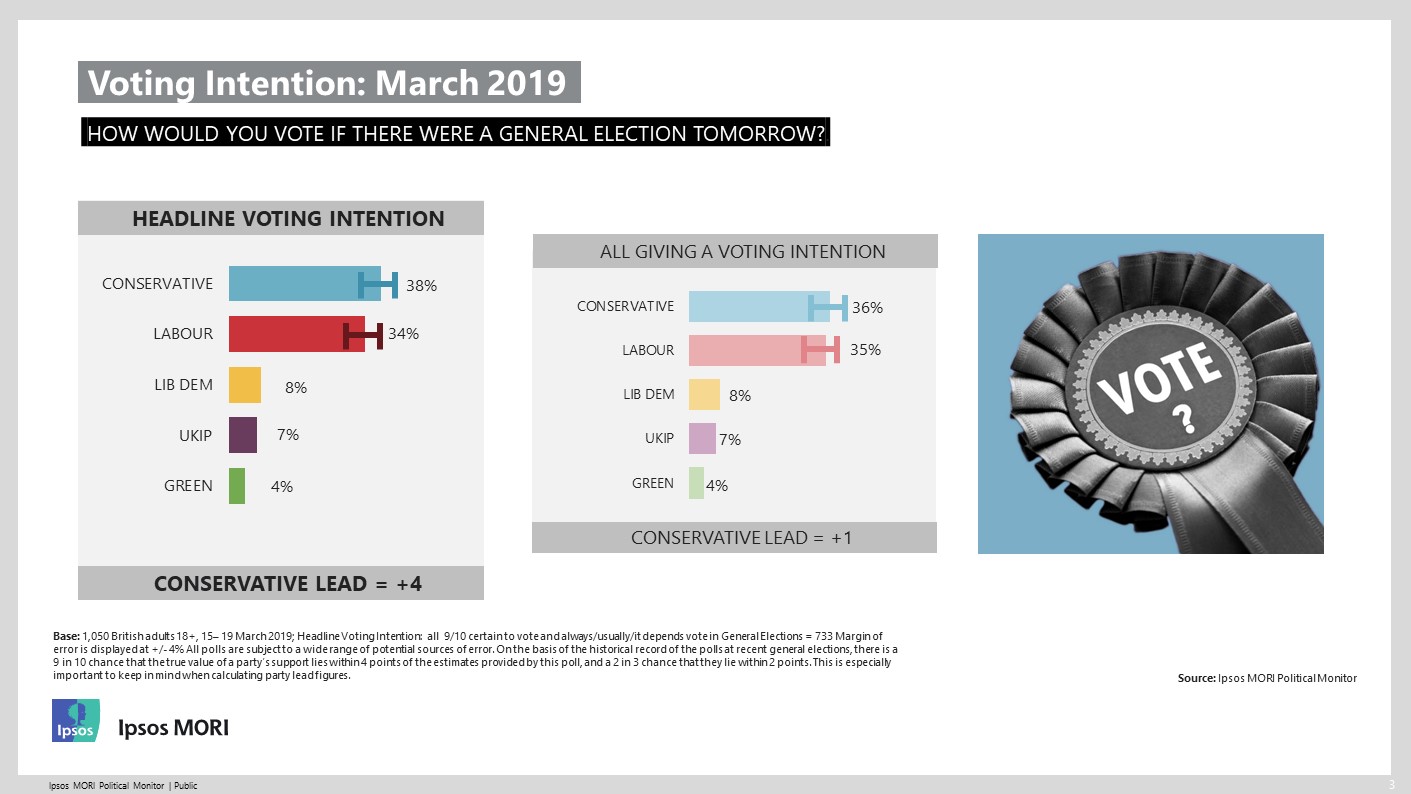 In forty years of our polling, the only other government to reach this level of dissatisfaction was also beset with European troubles – John Major’s, after Black Wednesday, which isn’t an encouraging precedent.  The Prime Minister’s ratings are not quite as low, suggesting she retains some sympathy from her party supporters at least, but her numbers are also falling - albeit with little sign of the public preferring Jeremy Corbyn.  This, combined with continuing pessimism about the economy, means the Conservatives’ support is on shaky foundations.

Ipsos interviewed a representative sample of 1,050 adults aged 18+ across Great Britain. Interviews were conducted by telephone 15th – 19th March 2019.  Data are weighted to the profile of the population. All polls are subject to a wide range of potential sources of error. On the basis of the historical record of the polls at recent general elections, there is a 9 in 10 chance that the true value of a party’s support lies within 4 points of the estimates provided by this poll, and a 2 in 3 chance that they lie within 2 points. The Independent Group and the Brexit party were added as unprompted options to the voting intention questions this wave.