New York, NY -Based on a recent Ipsos poll of over 2,000 U.S. adults, Betty White stands out as America's favorite and most trusted personality, and the one whose endorsement of a company would be most likely to drive business.

Denzel Washington and Sandra Bullock Next in Popularity

Betty White gets the highest favorability rating among 100 well-known personalities with 86% of those surveyed expressing a favorable opinion of her (vs. only 3% an unfavorable one). The next most popular celebrities include Denzel Washington (rated favorably by 85%) and Sandra Bullock (84%). Also in the top 10 are: Clint Eastwood (83%), Tom Hanks (81%), Harrison Ford (80%), Kate Middleton - now the Duchess of Cambridge - (79%), Morgan Freeman (also 79%), Will Smith (77%), and Johnny Depp (76%).

Most of the 100 personalities rated in the survey come from the world of entertainment, news and sports. Elected officials were deliberately excluded from the list. 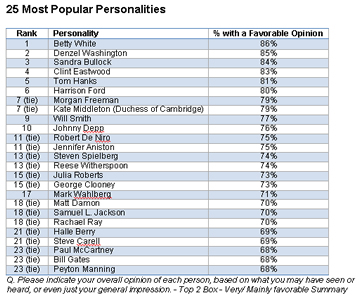 At the other end of the spectrum, only two of the 100 celebrities asked about were viewed unfavorably by an outright majority of respondents: Paris Hilton (with 60% expressing an unfavorable opinion of her vs. only 12% a favorable one) and Charlie Sheen (52% vs. 22%). The next most unpopular personalities among those rated are: Britney Spears and Kanye West (each of whom is viewed unfavorably by 45%), Arnold Schwarzenegger (44%), Tiger Woods (42%), Kim Kardashian (38%), Mel Gibson (33%), Donald Trump (31%), and LeBron James (29%).

Several of these 10 personalities - Tiger Woods, Charlie Sheen, Paris Hilton, Britney Spears - are more widely disliked by women than they are by men. The others show relatively comparable proportions of male and female detractors. 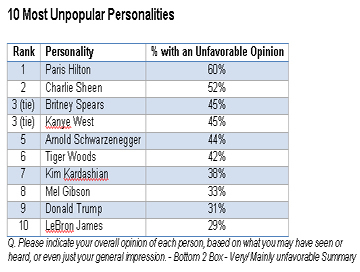 Among the 100 personalities rated, some show a stronger appeal to one gender or age group.

Not only is Betty White the most popular personality, but she also ranks as the most trusted one: More than two thirds of those asked (69%) rated her above average when it comes to being someone they trust while 65% rated Tom Hanks above average, 60% for Sandra Bullock, 59% for Morgan Freeman, 58% for Kate Middleton and 57% for both Oprah Winfrey and Taylor Swift. Another nine personalities received "above average" ratings from a full majority of respondents: Clint Eastwood, Harrison Ford, Denzel Washington, Julia Roberts, Bill Gates, Steve Jobs, Peyton Manning, Michelle Obama, and Steven Spielberg. 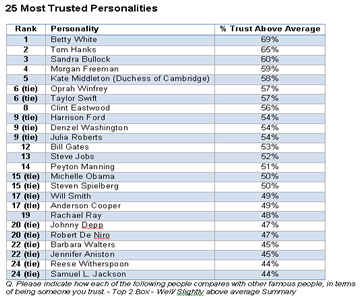 Bill Gates, Steve Jobs and Tom Hanks top the list of personalities whose endorsement would be most effective in making Americans place more trust in a company. In a recent Ipsos poll of over 2,000 U.S. adults aged 18 and older, majorities of those asked indicated that they would trust a company a little more or a lot more if it were endorsed by Bill Gates (53%), Steve Jobs (50%), and Tom Hanks (50%). Near majorities said so of, in order, Denzel Washington, Clint Eastwood and Sandra Bullock (49% for all three), Betty White (48%), Morgan Freeman (47%), and Oprah Winfrey (46%). Tied for 10th place are Julia Roberts, Steven Spielberg and Robert DeNiro (all 44%).

The average age of these 12 personalities is 62 and none of them is under 40, suggesting that maturity plays a large role in driving confidence.

No One Drives Purchase Interest in a Brand like Betty White

When it comes to driving purchases of a company's products or services, Betty White comes out on top as well: 44% of those asked said they would be a little or a lot more likely to do business with a company, if it were endorsed by her. The Ipsos poll's findings are consistent with those of an Ipsos-ASI poll, which ranked an ad featuring Betty White as the most entertaining, most unique, best liked and most talked about Super Bowl ad of 2010.

The most influential personalities when it comes to stimulating purchases of a company's products or services are largely the same as those who are most trusted and whose endorsement would most increase trust in brands: Betty White is followed, in order, by: Bill Gates and Steve Jobs, Tom Hanks, Sandra Bullock, Oprah Winfrey and Denzel Washington, and Morgan Freeman, Taylor Swift, and Kate Middleton.

Almost half of the women polled (46 percent) indicated that they were more likely to do business with a company if it were endorsed by Oprah Winfrey, compared to only 30 percent of men. 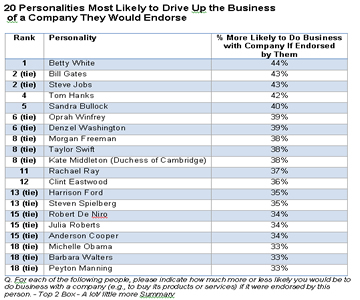 The list of the 10 least trusted celebrities is nearly identical to that of the 10 most unpopular ones. Two thirds of those asked (67%) rate Paris Hilton below average in terms of being someone they trust - roughly the same proportion who rate Betty White above average. Charlie Sheen is rated below average by 65%, followed by Britney Spears (60%), Tiger Woods (57%), Arnold Schwarzenegger and Kanye West (both 55%), Kim Kardashian (47%), Mel Gibson (45%), Donald Trump (44%) and Kobe Bryant (40%).

Charlie Sheen and Paris Hilton are the celebrities whose endorsement could be the most damaging to the brands they would endorse. Majorities of those asked indicated that they would trust a company less if it were endorsed by Charlie Sheen (54%) or by Paris Hilton (53%). Relatively large proportions also said so of Arnold Schwarzenegger and Britney Spears (42% each), Tiger Woods (40%) and Mel Gibson (34%).

Sheen is also the only celebrity about whom a majority of those asked (51%) said they would be a little or a lot less likely to do business with a company, if it were endorsed by him. The other celebrities whose endorsement could be most dissuasive about purchasing a company's products or services are, again, Paris Hilton (46%), Arnold Schwarzenegger, Britney Spears and Tiger Woods (38% for all three), and Mel Gibson (31%).

However, certain celebrities with a poor image among the U.S. public at large may actually have a positive impact among younger people on the brands they endorse. For example, while only 2% of those aged 55 and older and 10% of those aged 35-54 say they would be more likely to do business with a company endorsed by Kim Kardashian, 29% of those under the age of 35 say they would. Similar gaps across age groups are seen for Jay Z, Eminem and Sean Diddy Combs, among others.

These are some of the findings of an Ipsos poll conducted July 7-11, 2011. For the survey, a national sample of 2,012 adults aged 18 and older from Ipsos' U.S. online panel were interviewed online. Weighting was then employed to balance demographics and ensure that the sample's composition reflects that of the U.S. adult population according to Census data and to provide results intended to approximate the sample universe. A survey with an unweighted probability sample of 2,012 and a 100% response rate would have an estimated margin of error of +/- 2.2 percentage points 19 times out of 20 of what the results would have been had the entire adult population aged 18 and older in the United States had been polled. All sample surveys and polls may be subject to other sources of error, including, but not limited to coverage error, and measurement error.

Ipsos has media partnerships with the most prestigious news organizations around the world. In the U.S., UK and internationally, Ipsos Public Affairs is the media polling supplier to Reuters News, the world's leading source of intelligent information for businesses and professionals, and the Hispanic polling partner of Telemundo Communications Group, a division of NBC Universal providing Spanish-language content to U.S. Hispanics and audiences around the world.

Ipsos Public Affairs is a member of the Ipsos Group, a leading global survey-based market research company. We provide boutique-style customer service and work closely with our clients, while also undertaking global research.

Ipsos is a leading global survey-based market research company, owned and managed by research professionals that helps interpret, simulate, and anticipate the needs and responses of consumers, customers, and citizens around the world. Member companies assess market potential and interpret market trends to develop and test emergent or existing products or services, and build brands. They also test advertising and study audience responses to various media, and measure public opinion around the globe.

They help clients create long-term relationships with their customers, stakeholders or other constituencies. Ipsos member companies offer expertise in advertising, customer loyalty, marketing, media, and public affairs research, as well as forecasting, modeling, and consulting and offers a full line of custom, syndicated, omnibus, panel, and online research products and services, guided by industry experts and bolstered by advanced analytics and methodologies. The company was founded in 1975 and has been publicly traded since 1999. In 2010, Ipsos generated global revenues of e1.140 billion ($1.6 billion U.S.).

Visit www.ipsos-na.com to learn more about Ipsos offerings and capabilities.