Kip Davis, Senior Account Manager who conducted the deep dive into the study, believes that: “Brands and marketers should understand that wearing and owning designer and luxury brands is one of many strategies affluent African Americans employ to build respect and status in the white world.”

Understanding the tactics Black consumers use to navigate the white spaces they move through ties together the overall findings of this analysis. Davis sees Black Affluent consumers using clothes as a “readily processed indicator of class outweighing race. The point of the purchase [for Black Affluent consumers] takes on a value beyond the clothes themselves. The clothes provide a means to get the respect that is only provisionally granted by white society.”

1. Affluent Black American households spent $246 billion in the past year in total expenditures: 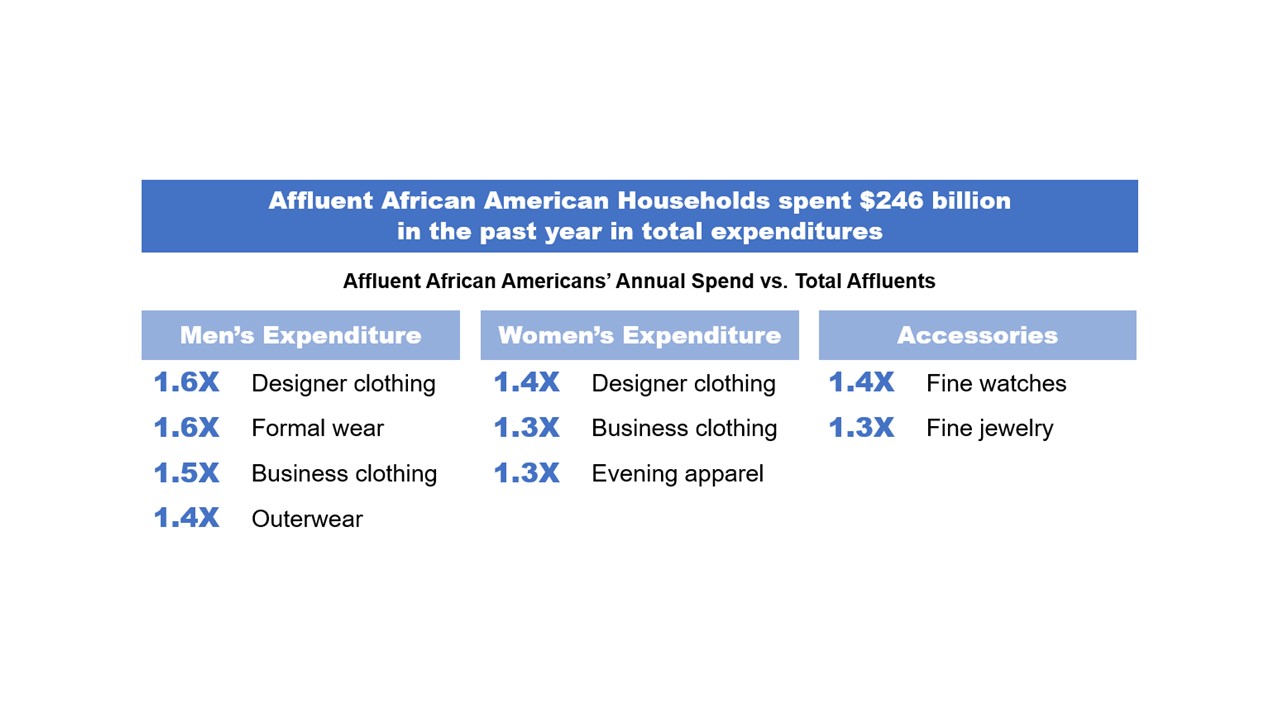 2. Style and design are important to Black Affluent consumers when shopping: 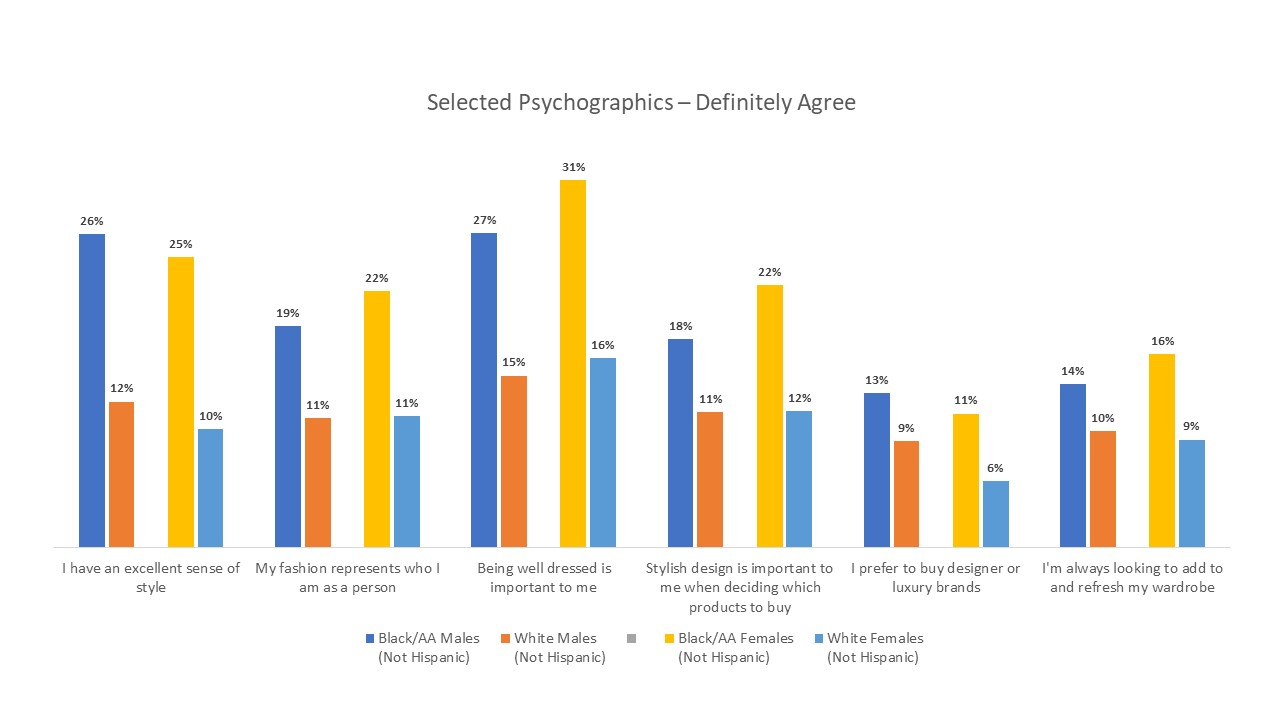 3. Affluent Black consumers look for superior service and personal attention when they shop: 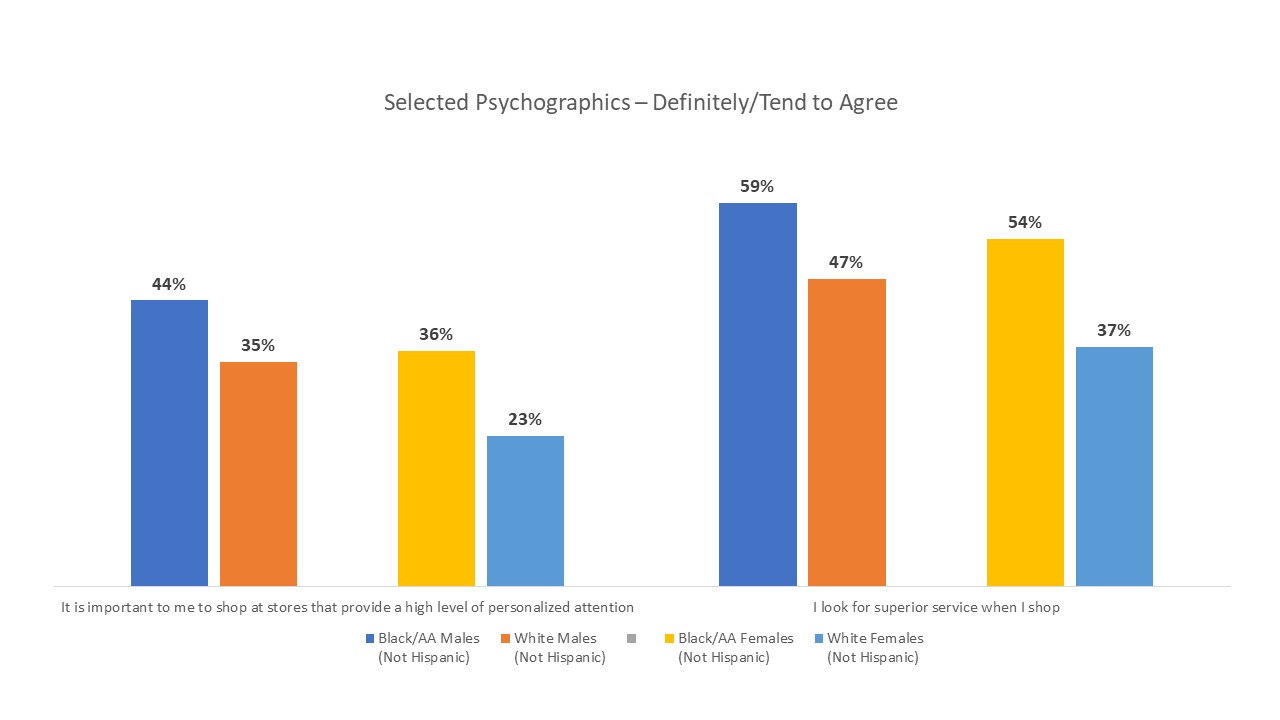 For more information on this analysis please follow this link.

These are the findings of the Ipsos Affluent Survey conducted between January and December 2019. For this survey, a sample of 24,908 adults age 18+ from the continental U.S., Alaska, and Hawaii was interviewed online in English. 1,470 Black Affluent Americans were interviewed for this survey. The poll has a credibility interval of plus or minus 3.5 percentage points for all respondents.

Kip Davis has worked for Ipsos and its predecessor Monroe Mendelsohn Research for thirty years and is currently a Senior Account Manager of Syndicated Research within Ipsos Media Development. For all of that time he has worked on what is now the Ipsos Affluent Survey USA.  His work on the study began as its coding director, and later project director responsible for the mailing, check-in and data preparation in the years when the survey was conducted by mail as well as questionnaire development for the vehicle section.  After the move to online, Kip continued to be responsible for the vehicle section. Given his years of involvement, Kip is also the “unofficial” historian for the Ipsos Affluent Survey USA.

In 2017, after a gap of forty-two years, Kip returned to his alma mater, Swarthmore College, to complete his senior thesis in Sociology and Anthropology.  Parts of the thesis; which was a study of the historically Black affluent summer community of Oak Bluffs, Massachusetts, provided the framework for “Affluent African American Consumers in Context: Buying While Black”.

The Ipsos Affluent Survey USA is a continuously fielded, online survey of adults (age 18+) living in U.S. households earning $125,000 or more. It is the longest-running and most widely used survey of American Affluents. The study is extremely comprehensive covering demographics, attitudes, media consumption, and product behavior.

Data for this article were derived from our Spring 2020 semi-annual release and is based on 24,908 interviews that took place between January and December of 2019. There were 1,470 Black/African American respondents who were interviewed for the survey during that time. All data from the survey were sample-balanced, weighted, and projected to population estimates provided by the U.S. Census Current Population Survey released in September 2019.