As consumers tighten their belts in an uncertain economic environment, the luxury market is not immune to a squeeze in discretionary spending. But certain demographics—notably, high-income households, younger consumers and some multicultural subgroups—provide a ray of hope for brands looking for light amidst the gloom. In addition, an almost universal preference among affluent Americans for luxury experiences over products provides lessons for marketers looking to focus their campaigns in the year ahead.

The Fall 2022 release of the Ipsos Affluent Survey tells us that a little over one third of Affluents agree that luxury products and services play an important part in their lives. So the fact that a higher percentage—46%—of Affluents say that they plan to spend on luxury in the next twelve months will be greeted with enthusiasm by the luxury sector. This data comes from our Q4–2022 Ipsos Affluent Barometer, which was fielded in November 2022.

The Barometer also shows that around half of Affluents are proud that they are able to afford luxury items, as something that makes them feel special, they say that “everyone deserves luxury now and then.” In other words, there is a sizable contingent of affluent consumers that is open to the idea of a luxury purchase, either for themselves or those around them.

Despite this cause for optimism, the luxury sector still faces challenges as we enter 2023. The proportion of Affluents reporting that they do not plan to spend anything on luxury in the year ahead has grown in recent years, from 23% in 2018 to 29% in 2020. The most recent figure is 31%. 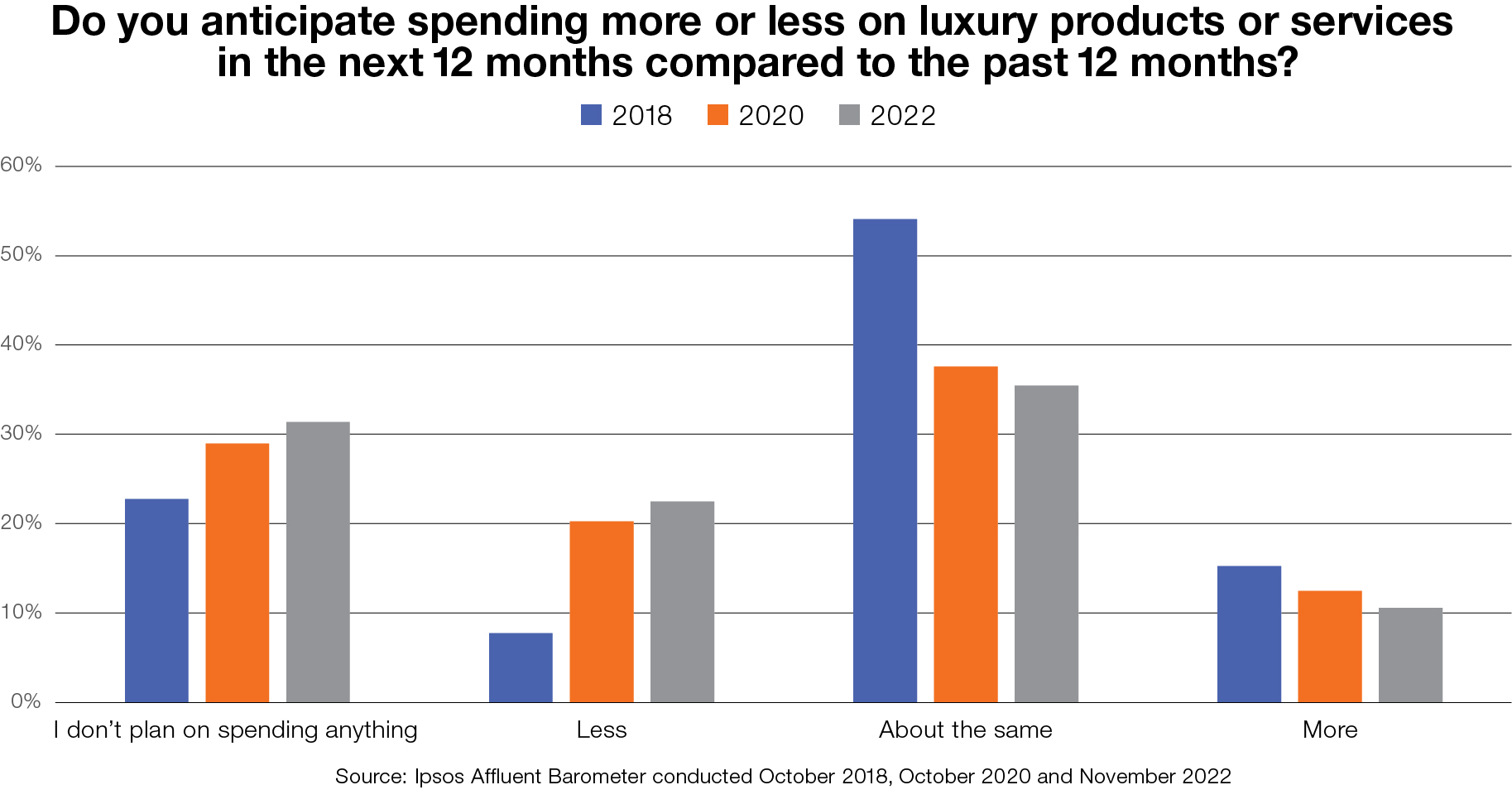 One reason could be that Affluents in general just don’t feel that good about luxury right now. Across almost every demographic segment, most report feeling somewhat or not at all positive about the term luxury, perhaps worried about being regarded as insensitive to the economic hardship that many currently face. In fact, when asked how they feel about buying and using luxury products, many Affluents describe sentiments of “guilt,” or as if they are “spending money on things they don’t need.”

This said, Affluents are still looking for luxury in their lives. They frequently describe feeling “special” after a luxury purchase, and very high proportions of Affluents say that small indulgences can be just as meaningful as a single luxury product. It may simply be the case that Affluents are changing how and when they search for luxury. At the moment, they universally prefer personal luxuries over those they can share—the only exception being Affluent Seniors, who perhaps are at the stage of life where greater satisfaction comes from putting a smile on other people’s faces.

If luxury is still likely to form a part of affluent lifestyles, then who should marketers target and how? Analysis of the Q4–2022 Ipsos Affluent Barometer reveals several key insights.

First, a focus on youth and richer households would not go amiss. Not only do these groups feel more positive about luxury than any other affluent segment, but they also report the highest shares of consumers who say that they spent more on luxury in the last 12 months than the year before. Millennials in particular show a much greater preponderance to spend more in the next year compared to this one. The propensity to spend more in the coming 12 months also rises in line with household income, as their discretionary spending is unlikely to be impacted by a recession.

The second lesson is to focus on key luxury categories over a uniform approach. A large part of Affluents report that they tend to choose luxury when it comes to buying computers and electronics. Digging deeper shows that higher income households gravitate towards luxury automobiles, suggesting that a campaign combining the right product with the ideal consumer is likely to be successful. 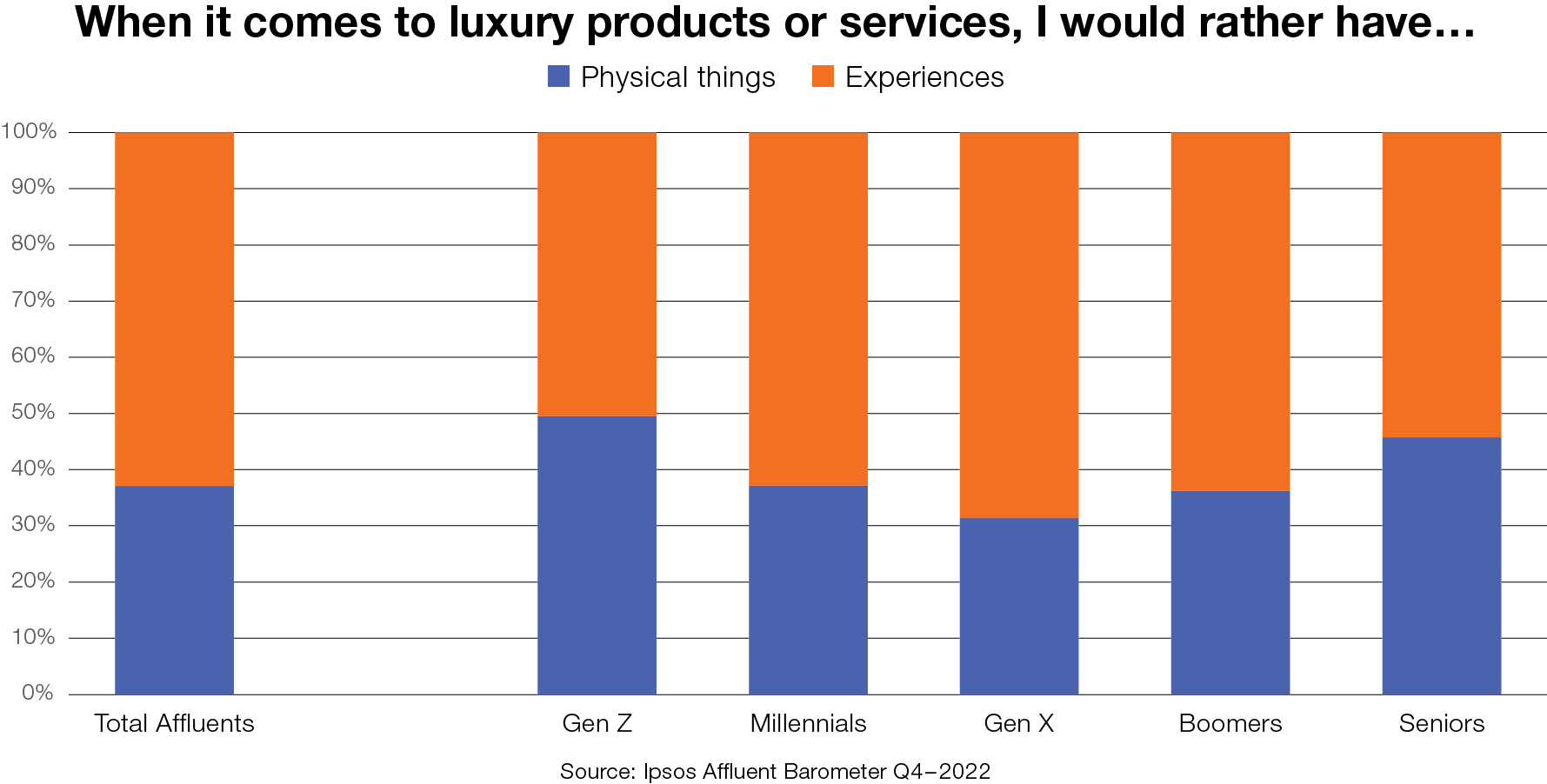 Interestingly, most Affluents report preferring luxury experiences to products, making this another area worthy of marketers’ attention. Affluents expect to spend more than Non-Affluents on several experiential categories, but travel in particular stands out. Here, almost two times as many Affluents anticipate spending more in the next six months when compared to the non-Affluent population. 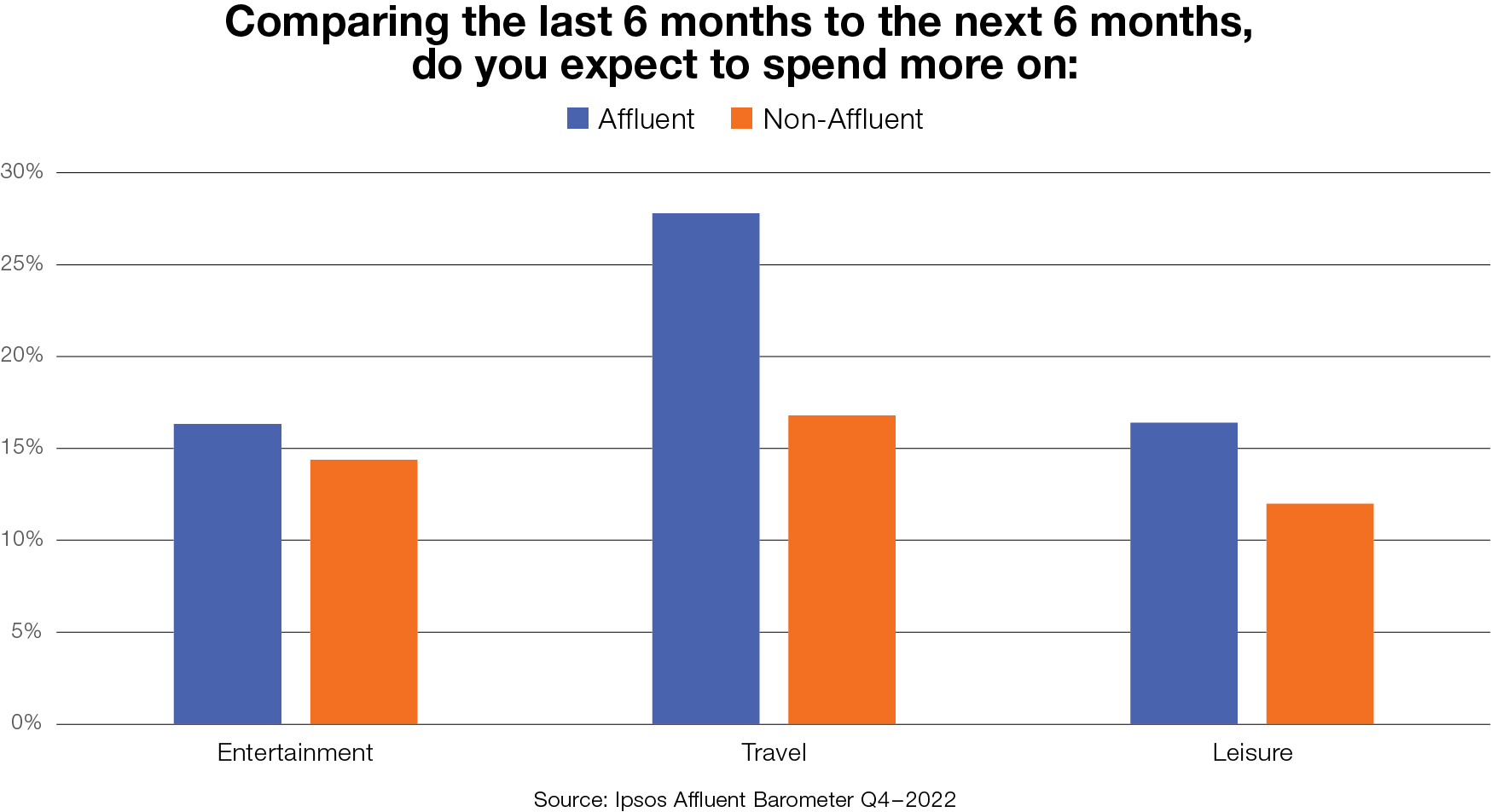 Looking at important constituencies shows that some affluent subgroups, in particular Hispanics and Asians, are outliers in an otherwise consistent pool. Hispanics are one of the few demographics where a relatively high proportion plans to spend more on luxury next year, for example, while Asians are alongside only Generation Z Affluents in preferring products to experiences.

If these are the buyers that will sustain the luxury industry in 2023, what are the messages that resonate with them? Again, different approaches are needed for each. Younger demographics tend to align with brands that are socially conscious, while higher income households tend to associate luxury much more with prestige and quality. In general, Affluents are looking for inspiration over information when it comes to luxury advertising.

In short, there are plenty of reasons to be hopeful about the luxury market—especially as higher income households typically make up the lion’s share of all luxury spending, and the indications are that they are both more resilient to a downturn, and more inclined towards luxury.

We know that Affluents often do their research to find the best price, even when it comes to luxury. But very high numbers of them tell us that they will stick with a new premium product if they like it, even if it is more expensive—so a canny approach to luxury marketing could pay off in spades down the line.