In our latest Ipsos Affluent Survey point of view, we take a deep dive into Affluents’ attitudes and behaviors as it relates to being eco-conscious – we look at the data across generations, ethnicities, and compare meaningful shifts over the years.

Which segments of America’s Affluent are actually choosing sustainable products and services as they become more mainstream? Does premium pricing impact their choice? Can these learnings represent a useful bellwether for the wider American market tomorrow?

As global warming increases the frequency and severity of extreme weather events, it’s worth exploring how affluent Americans perceive the climate crisis—and in particular, how these perceptions influence their economic, social or political activities.

Based on responses to the Spring 2022 Ipsos Affluent Survey, Affluents are integrating environmental factors into their purchasing behaviors, but the degree to which varies by demographic. There are several affluent environmentalists who manifest in different ways.

Affluent Americans do appear to be conscious of their environmental footprint. Around 61% say that minimizing their impact on the environment is an important part of their lives, and a similar share claim that they would be willing to pay more for products that are environmentally friendly.

While these relatively high proportions appear encouraging, the sentiments do not necessarily translate into concrete action. For example, in the past 12 months, a mere 7% of Affluents have taken an active role in an environmental cause, and only 14% have contributed to charities focusing on these issues. Just one in ten Affluents are members of an environmental organization, such as the Audubon Society or the National Wildlife Federation.

Younger Affluents are at the leading edge of environmental purchasing

When comparing different generations, however, it is younger Affluents that are at the forefront of changing attitudes towards the natural world. More than half (52%) of Gen Z Affluents disagree with the idea that the economy is more important than the environment, a greater proportion than any other affluent generation.

But it is Millennial Affluents who appear most willing to incorporate eco-consciousness into their consumption patterns. This group is the most likely to investigate a company’s environmental or social record, seek out products that are eco-friendly or sustainable, and agree that organic food is worth paying more money for. And when compared with other affluent generations, more Millennials make an effort to buy foods that are produced locally, or are considering hybrid and electric vehicles for their next auto purchase. 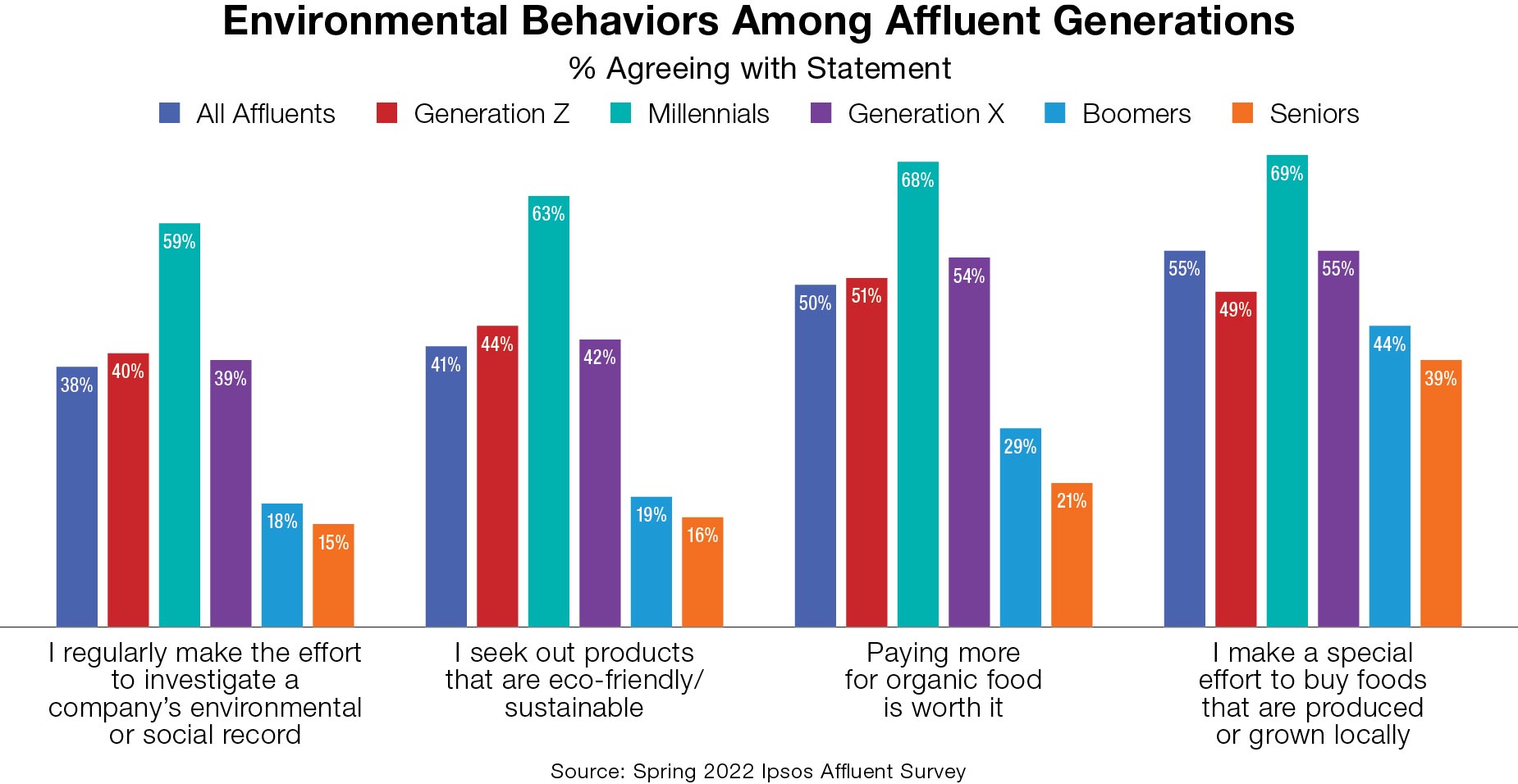 Segmenting by income suggests that wealthier Affluents and their households may have more to do to mitigate their environmental footprint. Evidence shows that the world’s richest contribute most to climate change, but results are mixed when looking at our respondents’ habits.

In general, ultra-Affluents—those with a household income between $250,000 and $500,000—are less likely to take pro-environmental actions than mass Affluents (those earning $125,000–$250,000). Ultra-Affluents express a lower willingness to pay for environmentally friendly products, and a smaller share states that minimizing their environmental impact is an important part of their lives.

But optimistically, wealthy Affluents—those with a household income above $500,000—appear broadly more inclined toward environmentally friendly behaviors. This group is the most favorable of the environment in every aspect, from volunteering activities to purchasing food, autos and household products.

Interestingly, Affluents across age and income levels are consistent in stating that they do not associate sustainability with luxury. This suggests that value for money takes precedence when Affluents are considering sustainable products. Brands could find success in marketing their environmentally friendly offerings in this way, beyond highlighting ecological credentials.

Environmental activities vary according to ethnicity and gender, too

Age and income are not the only determinants of what makes an affluent environmentalist. Within ethnicities, Black, Asian and Native American Affluents are more likely to disagree that the economy is more important than the environment than their white counterparts, but it is the latter group that has engaged most strongly in environmental activities in the past 12 months. Indeed, as a proportion, white Affluents have been active in environmental causes and contributed to environmental charities more than almost all other ethnic groups, even if the numbers are still relatively low.

Finally, looking at the data by gender also reveals disparities in how Affluents feel and how they behave. Many more affluent males agree that the economy is more important than the environment—a total of 63%, compared to only 37% of affluent females. But again, it is the habits and intentions that are striking. Men are generally more involved in environmental activities, as well as factoring the environment into their purchasing decisions, than women.

Looking ahead, it’s quite plausible that consumers’ feelings towards the environment could change—both as the negative effects of climate change are felt closer to home, but also as sustainable products and services become more mainstream. At the moment, these can be priced at a premium, making it easier for wealthy individuals to absorb their costs. This means that affluent habits today may represent a useful bellwether for the wider American market tomorrow.

In fact, since the Spring 2018 Ipsos Affluent Survey, the share of Affluents saying that they are seriously considering a hybrid or electric car for their next vehicle purchase has risen from 48% to 60%, while those regularly making an effort to investigate a company’s environmental or social record has jumped from 30% to 38%. If similar trends are reflected across the country, the environmental category will form an ever-greater share of Americans’ buying behaviors.

Marketers therefore may wish to look at success stories in attracting and retaining affluent consumers, in order to apply them to other parts of the market. This could be particularly important in reaching today’s younger, less established—and less affluent—adults, who hopefully will come to feel more financially insulated as they age and move into the affluent category in the future.