It’s war, at least on social media. Fed up with being chastised by older generations for their supposedly lazy and entitled ways, Gen Z-ers and millennials are clapping back with the catchphrase “Ok, Boomer,” an ironic shutdown intended to be deployed in response to old people shaking their heads in disapproval at the “kids these days.” #Okboomer is blowing up on social media, spawning countless hashtagged posts on TikTok and Twitter, and inspiring entrepreneurial youth to create sweatshirts and other swag emblazoned with the phrase.

While inter-generational disapproval is a tale as old as time, the conflict takes on a more sinister dimension in light of the many challenges that younger generations will have to contend with going forward, many of which were created or facilitated by Baby Boomers.

Millennials and Gen Z-ers will inherit a world in which student debt is curtailing too many graduates’ futures, elites are more interested in maximizing their power and wealth than serving society, and the general public seems to be indifferent to the many problems besetting us. And that is just in America! Around the world, we see an apparent resurgence of authoritarianism and millions of people displaced from their homes due to war and other turmoil. Oh, and society as we know it might be coming to an end as climate change accelerates.

“The old are consuming the young to maintain their longevity,” Australian scholar Geremie Barmé told Jiayang Fan in a The New Yorker article on youth-led protests in Hong Kong. A dark perspective, certainly, but one that would explain the urgency of many intergenerational conflicts. Millennial and Gen Z protests are not limited to social media: millions are taking to the streets to speak out against a range of social issues, from gun violence to climate change.

As we lurch forward into an ever more uncertain future, it is notable that Baby Boomers hold themselves in high regard, at least compared to the generations coming after them. More than four in five Boomers say that they are favorable to their own generation, while only two in five are favorable towards younger generations. Millennials, by contrast, are more evenly split in terms of the level of esteem they hold for themselves and the generations following them.

Could it be that Boomers’ self-confidence is insulating them from taking younger generations’ critiques more seriously? What would it take to break through Boomers’ self-regard and inspire them to feel more empathy for the generations coming up behind them?

The Boomer generation’s preference for their own kind is reflected in the 2016 presidential election, when America saw a schism between the generations in whom they supported. More older Americans voted for a candidate who was an implicit rebuke to youthful priorities and was explicitly hearkening back to a mythic golden age where he could “make American great again.” While young people did not have a young candidate to support, they were more likely to put their weight behind a candidate who made nods towards the social liberalism and multiculturalism embraced by most young people. 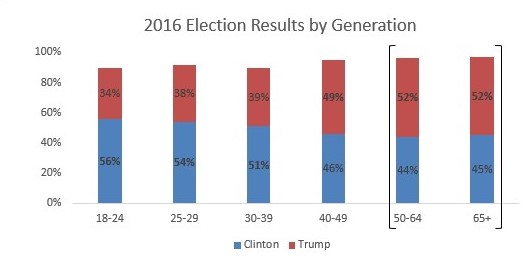 Despite their differences, Boomers and Millennials tend to agree that the United States is headed in the wrong direction. Unfortunately, the two generations do not seem ready to come to a consensus on how to address our collective problems. 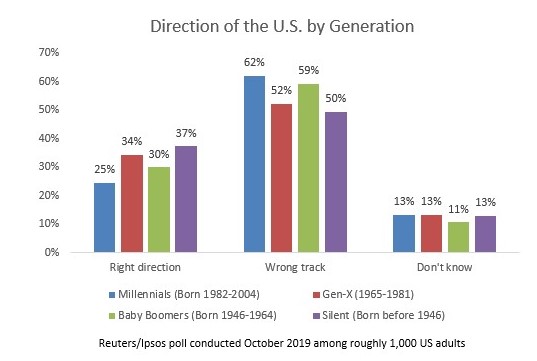 The “Ok, Boomer” movement is also making its mark outside the United States. Just this week, Chlöe Swarbrick, a 25-year-old member of the New Zealand Parliament, used the phrase to push back at an older colleague jeering at her as she spoke on climate change.

Recent protests with Millennials and Gen Z-ers at the forefront demonstrate that they are committed to getting the world back on what they consider to be the right track, whether older generations think they are going about it in the right way or not. It perhaps should not be surprising that the most persuasive spokesperson for the climate and humanity’s collective future has turned out to be a 16-year-old girl who is unconcerned with what her elders have to say. Greta Thunberg inspired worldwide youth climate protests in more than 100 cities and has been unsparing in her rebuke of the political establishment. During a September visit to the House of Representatives, Ms. Thunberg kept her message to lawmakers simple and clear: “I want you to unite behind science. And then I want you to take real action.”

From the streets of Hong Kong, to climate activism, to poking fun at grumpy Boomers online through the strategic deployment of ironic hashtags, it is clear that younger generations do not intend to sit back and allow their seniors, whether by age or political status, to dictate their futures. As the saying goes: Ok, Boomer.