His book, “the Rise of the Creative Class” detailed the characteristics of this type of worker and more importantly how to nurture and attract them. Its core findings were adopted by mayors worldwide. The trends identified in Florida’s research contributed to the seismic shifts, growth and revitalization in downtowns large and small. Those changes have not been painless for all involved and have lead to what Florida, in his new book, calls the “New Urban Crisis.” So when Richard Florida asks What the Future, he wonders if developers are recognizing the new realities.

GenPop: Why is it important to ask about this?

Richard Florida: The fundamental fabric of our cities is changing. While the back-to-the-city movement spurred a migration of young, talented residents from suburbs to city centers, today’s cities are dealing with the side effects of this urban revival. Cities and metros across the world are suffering from a New Urban Crisis characterized by segregation, inequality and the decline of middle-class neighborhoods.

These issues have caused a shift in priorities among urban residents. Whereas young, talented people once flocked to cities for their cultural vibrancy and economic opportunities, today they are being deterred by rising housing prices and competition for urban space. As our cities change, it is important for local developers and anchor institutions, among others, to shift their priorities as well. 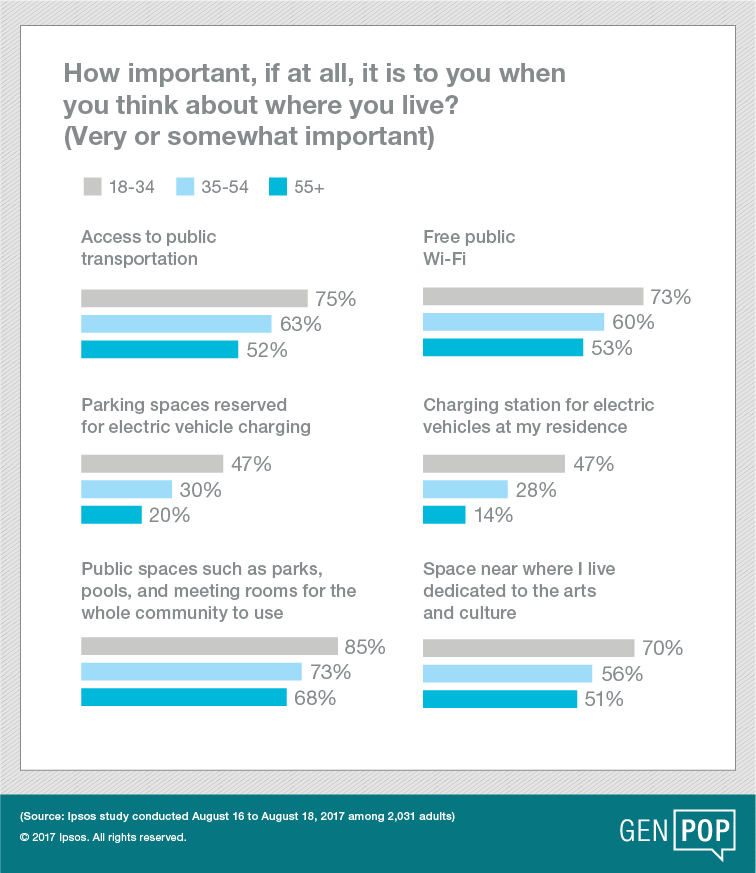 GenPop: How do you expect the data to change in the future?

Florida: I expect the trend of Millennials’ chasing after urban amenities to continue, but I also anticipate a growing trend of older folks—the retired Baby Boomers—filtering into prestigious or trendy urban neighborhoods. In the past year, I’ve known three people in their mid-60s who are looking to purchase apartments in the hip, bohemian, intellectual neighborhoods of New York City—places like Soho and Chelsea—as opposed to the Upper East Side. Some of these people are looking to be close to their grown-up kids in the city, while others are searching for a second home that offers a more contemporary urban lifestyle. Increasingly, these affluent Baby Boomers are looking to be exposed to urban amenities like restaurants, art galleries and gym memberships—all of which are made more accessible in cities.

Florida: Although the cost of living is a major factor in determining one’s location, it is unlikely to deter well-off, retired Baby Boomers from relocating to the city. The more likely effect is that younger residents—especially the artists, musicians and other creative types who helped to revitalize cities in the 1970s and 1980s—will gradually be priced out of downtown areas. The same goes for service and blue-collar workers, who are already being forced to relocate to nearby suburbs.

Housing costs in particular are the main reason why people opt out of urban living. In metros like Orlando, Las Vegas or Miami, for instance, the average worker has less than $28,000 in income left over after accounting for housing costs. In most cases, these numbers fall even further when you look at the wages for the working and service classes. In the wake of the New Urban Crisis, a lack of affordable housing threatens to overshadow the appeal of urban amenities, not just among young people, but also among residents from all incomes and walks of life.

GenPop: Are Millennials really all that different from previous generations, or is this more of a life-stage thing?

Florida: My research indicates that both age and generation have an impact on where people choose to live and why. On the one hand, younger residents are naturally drawn to the host of public amenities and cultural offerings found in cities. On the other hand, there are certain elements of urban living that align with the priorities of the Millennial generation: things like speed, accessibility, sustainability and so on. It’s not just that younger people are more attracted to urban living; it’s also the case that Millennials have put a premium on urban amenities like parks, wifi and communal meeting spaces, as your data suggests.

GenPop: Will the New Urban Crisis make some of these things harder to obtain for many or most Americans?

Florida: The New Urban Crisis has made urban amenities easier to obtain in some areas and harder to obtain in others. In large, dense, superstar cities, for example, the majority of residents enjoy broader access to transportation and cultural amenities like museums, theaters and restaurants. But these areas also suffer from a crisis of their own success. As more people flock to cities like New York, San Francisco, L.A. and Washington, D.C., their low- to moderate-income residents are quickly getting priced out of urban neighborhoods. The farther these residents live from a city’s center or downtown area, the less access they will have.

Smaller, more sprawling metros have nearly the opposite problem. Their amenities are fewer and less diverse, but they are relatively easy to obtain, since the cost of living in downtown areas is significantly cheaper. Moving forward, cities must strike a balance between offering a sufficient and diversified share of public amenities and making sure that all residents have access to these resources.

Richard Florida is University Professor & Director of Cities at the University of Toronto’s Martin Prosperity Institute, Distinguished Fellow at NYU’s Schack Institute of Real Estate, and co-founder & Editor at Large of CityLab.