New York, NY, March 29, 2017 – Today’s consumers have more choices than ever before for viewing video content, with a growing variety of formats and platforms available. With more viewer options than ever, advertisers want to know, “Are people paying attention to my ads? Are all platforms equal in capturing and holding viewer attention?”

Building on existing Google research on sight and sound, Google commissioned Ipsos to conduct research to explore the differences in consumer attention when ads are viewed on different platforms in a natural viewing environment. The findings aim to better understand the degree of visual attention ads generate by platform and also explore the impact ads have on brand metrics when comparing TV ads and YouTube ads, in order to determine how the two platforms stack up on attention and whether they can complement each other when it comes to improving brand perceptions among consumers.

In order to determine the level of attention given to advertisements on different platforms, Ipsos conducted an in-home observation study using eye-tracking technology, a tool commonly used by market researchers to help brands better understand consumer behavior. The research was conducted among two groups of participants in the Cincinnati area, followed by a brief online survey. One group of participants wore eye-tracking glasses during their regular TV viewing sessions at home, while the other wore the eye-tracking glasses during their regular, YouTube mobile viewing sessions at home (n=86 18-54 year olds who watch at least 5 hours of TV per week, and n=87 18-54 year old Android owners who watch YouTube monthly). This approach allowed for machine-led observation of viewing behavior in the comfort and natural environment of the home, providing an accurate measure of visual attention to advertising on TV and YouTube.

Four definitions were developed to define levels of ‘attention’ or lack thereof based on consumer behavior as measured by the eye-tracking glasses:

This approach went beyond the Interactive Advertising Bureau’s (IAB) standard definition of viewability and sought to determine if people actually “look” at video advertising on TV and YouTube Mobile. 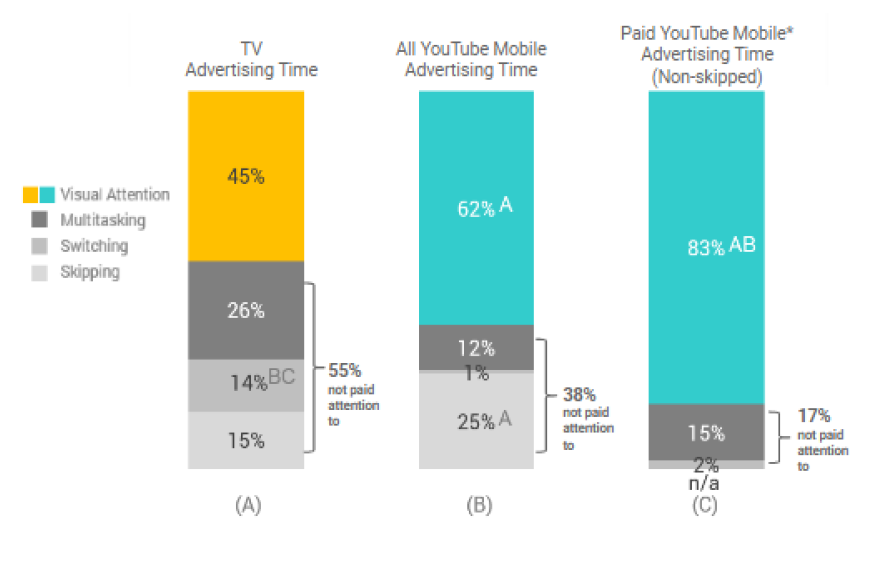 After quantifying the eye-tracking data gathered from participants who were watching TV according to these definitions, results show that the majority (55%) of TV advertising time is NOT paid attention to. That advertising time is either spent multitasking (26%), skipping the ads (15%) or switching channels/videos (14%).

Several hypotheses can be presented to explain the fact that YouTube mobile ads are seen to capture viewers’ attention more effectively than TV ads. For one, TV ads generally are presented several at a time while YouTube ads are delivered one at a time, which could make them more palatable and contribute to consumer attentiveness. Data collected from the 5-minute online survey that participants completed after their viewing session shows that 73% of TV viewers find the amount of TV ads during their favorite shows annoying. Knowing that they can expect to watch at least 3-minutes of ad content during every commercial break could negatively impact the level of attention and increase likelihood to change the channel. In contrast, knowing that there is the option to skip a TrueView ad after 5-seconds on YouTube can improve viewers’ overall experience with the platform, while still giving advertisers the chance to convey a memorable message/ harness attention within the first few seconds.

Another reason that could potentially help explain why YouTube mobile ads are seen to capture viewers’ attention more than TV ads has to do with viewers’ proclivity to multitask. For example, the follow-up survey also found that two thirds (66%) of TV viewers say that they typically pick up another device, or multiscreen, during a television ad break versus only 6% of YouTube mobile viewers who do the same when ads play on YouTube. Furthermore, the odds of TV viewers getting up to do something else in the room when commercials come on (56% vs. 14% YouTube viewers) or leaving the room altogether (55% vs. 2%) are significantly greater than those of YouTube viewers who might do the same. Possible multitasking behavior can involve grabbing a quick snack, visiting the bathroom, letting the dog in/out, talking to someone in the room or in the house or reading something, like the mail or a magazine. This behavior may be less common among YouTube mobile viewers because many of the ads on YouTube are skippable and typically shown one at a time, leaving less time to “take a break.” Further, unlike TV viewers, YouTube mobile viewers have the luxury of bringing their screen with them if they need to leave the room.

Impact of Ads on Brand Perceptions Differs by Metric/ Platform: Combination of YouTube’s TrueView Paid Views and TV Maximizes Impact Along the Funnel

With the goal of determining what impact ad viewing can have on brand metrics, Ipsos and Google also conducted an experiment where respondents across the U.S. were tasked with watching either a controlled set of TV content or a combination of YouTube and TV content in their homes, then asked to answer a series of follow-up questions in order to gain insight into the content’s impact on certain brand metrics (awareness, ad recall, purchase intent, consideration, recommendation, and closeness).

Respondents were exposed to TV ads and YouTube’s TrueView ads. TrueView is an ad format that gives viewers the option to skip the ad after 5 seconds. Advertisers only pay when a viewer watches 30 seconds of an ad (or the duration if it is shorter than 30 seconds) or interacts with the video, whichever comes first.

When looking at metric results for participants who were shown a combination of TrueView paid views and TV content, impact on brand metrics was higher than just TV alone on most brand metrics. This is especially true when looking at top of mind brand awareness (+38% change), top of mind ad recall (+31%), and recommendation scores (+71%).

Conclusion Visual attention to ads is a critical consideration for advertisers when deciding where to place their ad dollars because:

Ipsos has media partnerships with the most prestigious news organizations around the world. In Canada, the U.S., UK, and internationally, Ipsos Public Affairs is the media polling supplier to Reuters News, the world’s leading source of intelligent information for businesses and professionals. Ipsos Public Affairs is a member of the Ipsos Group, a leading global survey-based market research company. We provide boutique-style customer service and work closely with our clients, while also undertaking global research.

In order to determine the level of attention given to advertisements on different platforms, Ipsos conducted an in-home observation study using an eye-tracking approach among two groups. One group of participants wore eye-tracking glasses during their regular TV viewing sessions at home, while the other wore the eye-tracking glasses during their regular, YouTube mobile viewing sessions at home (n=86 18-54 year olds who watch at least 5 hours of TV per week, and n=87 18-54 year old Android owners who watch YouTube monthly). All participants were located in Cincinnati, OH, U.S.

The eye-tracking glasses recorded participants’ field of view in combination with where their eyes were focused (through live gaze-tracking) during their TV or YouTube viewing sessions. For TV specifically, a standalone video camera was installed in the home facing the TV in order to determine the timing of TV ad breaks. For YouTube, a passive tracking app was installed on participants’ Android smartphones in order to determine the timing of YouTube ad breaks.

The eye-tracking data was coded into predetermined areas of interest in order to quantify the amount of time spent watching advertising and doing a variety of other activities during this exercise. A total of 2,953 ads were observed, including 2,676 TV ads and 277 YouTube mobile ads. In addition to this, participants completed a 5-minute online survey via tablet the following day in order to provide contextual information around their observed behavior during their respective viewing occasions.

To determine the impact of different advertising platforms – YouTube (via desktops and smartphones) and TV — on brand perceptions in a natural viewing environment, Ipsos conducted controlled viewing experiments in consumer homes in the U.S. A national sample of n=1,572 males and females 18 to 49 years old participated in the experiment (which lasted two consecutive days), and respondents were exposed to a selection of 9 ads, resulting in a total of 2,076 ad exposures. Each respondent was assigned into a one of three main cells that determined the platform or platforms to be used for viewing: TV Test Cell (TV on both days), TrueView+TV Paid Views Test Cell and Control Cell. Each respondent was exposed to content plus 3 ads according to their cell assignment and each answered survey questions in the process.