The events of the last month have exposed to all Americans the systemic racism that permeates American life. We at Ipsos see this moment as an opportunity to look at our data through a new lens and to illustrate how a pervasive climate of racism impacts the behaviour of African Americans. The analysis that follows shows other ways of looking at our data, looking for the “why” behind the “what”. For this piece we will be looking at how affluent African Americans use personal presentation to counter racial stereotyping, or asking the question, “Why does that black man wear his Ivy League t-shirt when jogging”?

One such lens, outside the traditional boundaries of market research, comes from contemporary work in sociology on race and class in America, where much social research has been done on the behaviour and coping strategies of African Americans in a previously all-white world. Karen Lacy in her book “Blue-Chip Black”, focuses on the behaviour of what she calls elite middle-class African Americans making over $50,000 a year. According to Lacy members of this group engage in two kinds of “boundary work”: exclusionary and inclusionary.

The data from the  Affluent Survey, which tracks the media behaviour and buying habits of affluent Americans, provide a great opportunity to look at the intersection of race and affluence in the area of consumer behaviour.

The Ipsos' Affluent Survey highlights distinct and statistically significant differences in African American attitudes regarding presentation and outward appearance when compared to their white counterparts. Affluent African Americans are twice as likely as whites to definitely agree with the statements: “I have an excellent sense of style”, “My fashion represents who I am as a person” and “Being well-dressed is important to me”. This difference is true for both men and women – and similar trends exist across age cohorts 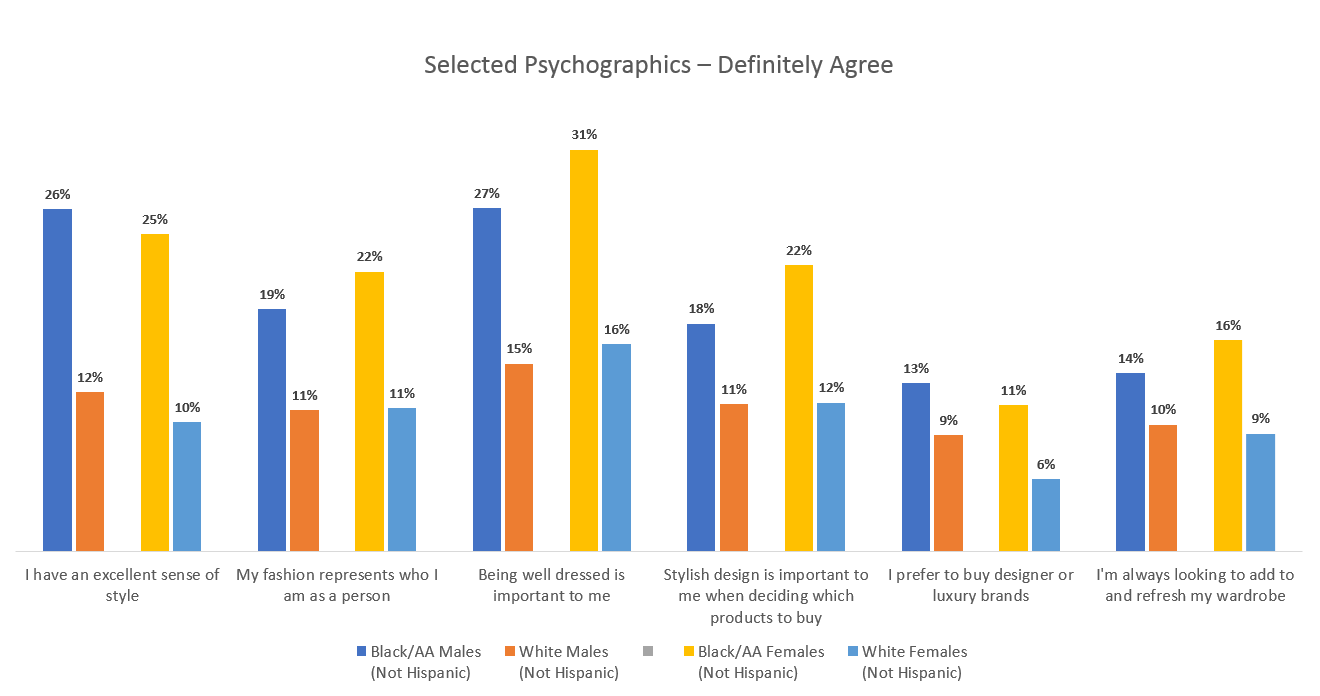 Clothes are a readily processed indicator of class outweighing race. The point of the purchase takes on a value beyond the clothes themselves. The clothes provide a means to get the respect that is only provisionally granted by white society. Anderson points out that Affluent African Americans perceive dressing casually as a liability. Doing so increases their likelihood of being challenged in restaurants, in retail stores, in their buildings, in banks and other financial institutions, or while jogging in one’s own neighborhood.1 This performance strategy is not fool proof, as there still exist multiple instances of being stopped for engaging in any activity “while black”, or of backlash for “flaunting” indicators beyond one’s perceived station, but it does increase the odds of acceptance.

The search for respect manifests itself in other attitudinal statements related to customer service. Affluent African Americans, across both gender and age, place more importance on personalised and superior service at levels higher than their white counterparts. Across the entire battery of luxury and style statements in the Affluent Survey, African Americans consistently over-index against whites.

It is important for people and brands to acknowledge the emotional labor undertaken by our African American co-workers, clients, customers and neighbors every day as they navigate the white world. This is a strategic navigation filled with an infinite number of seemingly insignificant decisions like what clothes should I wear while jogging. For marketers, the word “aspirational” has often been used to describe the lower end of the luxury market. For the affluent African American consumer those aspirations include the right to be treated fairly and with the respect that should come with financial success.

Brands and marketers should understand that wearing and owning designer and luxury brands is one of many strategies affluent African Americans employ to build respect and status in the white world. Prioritising and building strong customer service models will be a valuable tool for building customer loyalty and respect among black consumers, recognising the symbolic meaning of any purchase that involves display. That these strategies, which are essentially defensive and conservative, align with a fashion-forward sensibility make the affluent African American consumer unique. By recognising this dichotomy and empathising with the strategies African Americans employ luxury brands can create a deeper relationship with a group that is more passionate, and already outspends it white counterparts in the category.

This piece is just one way to look at a small portion of our data. Follow the link here to a snapshot of affluent African Americans from the most recent Ipsos' Affluent Survey. We will continue to look at this under-researched segment using this data and from that gathered from our quarterly barometers.