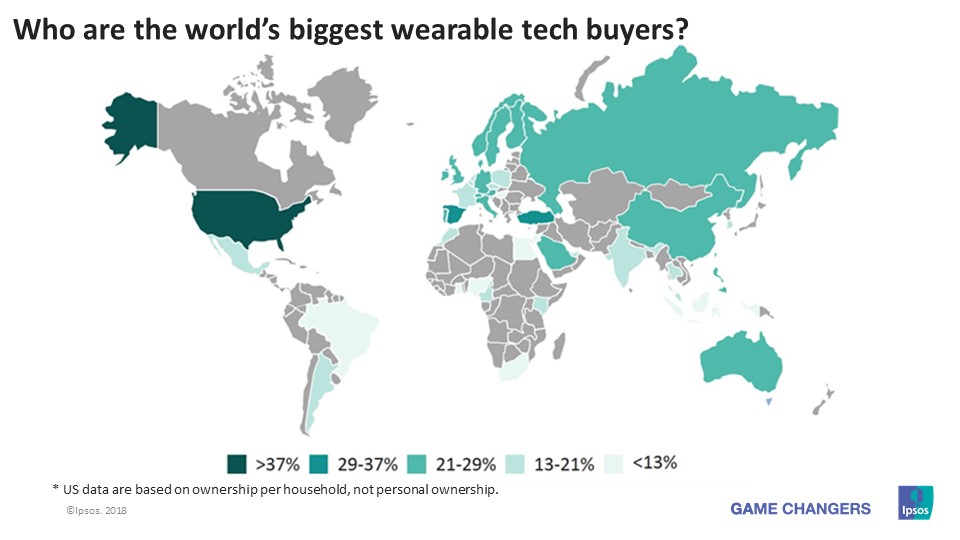 Increased adoption of fitness trackers and smartwatches is greatest in Western markets. Rapidly developing countries such as China (28,1%) and Russia (23,8%) offer opportunities for wearables producers and app developers.

The Spanish Affluent rank second worldwide, a fitness tracker is the most popular wearable tech device: 19.5% personally owns one or more.

In Turkey, which has the third highest penetration, Affluent are most likely to own a smartwatch.

You might expect that smartwatches and fitness trackers are mostly bought by male, tech-savvy millennials – you would be wrong!

While, the gender gap in most countries is relatively small; men are more likely to own smart watches and fitness trackers are more popular amongst women.

In Europe, the USA, Asia and Latin America, adoption and ownership of smartwatches and fitness trackers is biased towards Affluent millennials. In the Middle East and Africa penetration is higher among consumers aged 35 and over.

Did you know that in Europe, fitness trackers are most popular amongst women aged 35 to 44? And that 20,3% of the European Affluent is planning to buy a wearable device in the next twelve months?

The Ipsos Affluent Survey contains data about Affluent’s adoption of wearables, smartphones and many other personal electronics in 41 countries worldwide, providing you with deep insights in the buying habits of the world’s most influential consumers.

At Ipsos Affluent Intelligence, we deliver data and insights that help you to reach and understand the world’s most influential consumers. Since 1995, our Ipsos Affluent Survey has been tracking the media use and consumption habits of over 35.000 respondents within the top income segment, representing 62.6 million Affluent in 41 countries. Not only do Affluent spend more, they are also innovators who adopt new technologies at an early stage. Moreover, these top business decision makers act as opinion leaders and influence others within their communities. Contact us below and learn more the Affluent today.