Economic optimism falls to its lowest level for four years

Britons think Brexit will be worse for economy in the short-term, but better in the long term.

Half expect less EU immigration than if UK had voted to stay, but only 30% think it will reduce immigration from rest of world.

Ipsos MORI’s Economic Optimism Index has fallen to its lowest level since January 2012, this month’s results reveal. Nearly six in ten worry Britain’s general economic condition will get worse over the next 12 months (57%, up 28 points since last month’s 29%), compared with just one in four (23%, up since 19% in June) who think it will get better (16% say it will stay the same, down from 31% last month). This gives an Ipsos MORI Economic Optimism Index (% better minus % worse) of -34, compared with -10 in June. 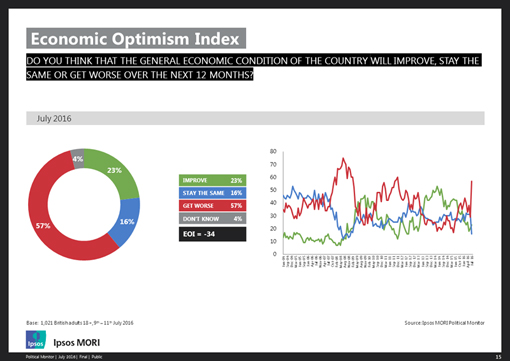 The biggest increases in pessimism have been amongst:

The public is split on Brexit’s impact on public services (32% better, 36% worse), and on Britain’s national security (32% better, 31% worse). They are worried about what it means for Britain’s influence in the world (31% better, 42% worse), but hopeful for Britain’s ability to make decisions in its own best interests (59% better, 21% worse). 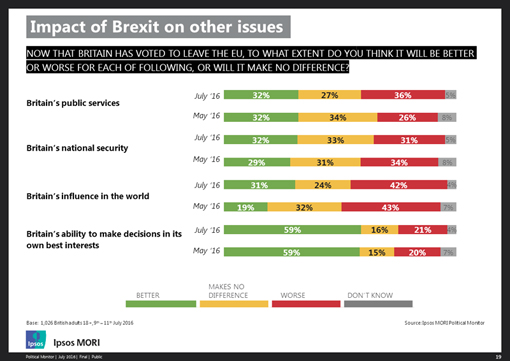 On immigration, one of the key issues of the campaign, half (49%) think the Brexit vote will lead to lower numbers of EU immigration than if we had voted to remain, although 41% say it will make no difference (7% think it will be higher). When it comes to immigration from countries outside the EU, half (51%) think the leave vote will make no difference to the numbers coming to the UK. Three in ten (30%) believe it will be lower than under a remain vote, while 14% think it will be higher. 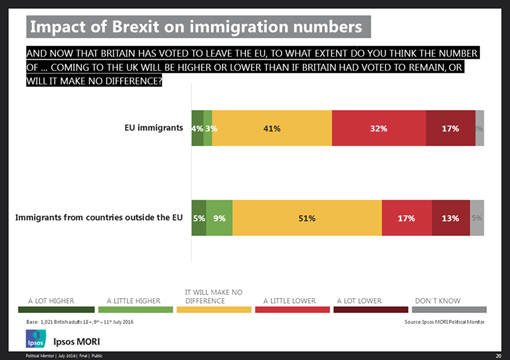 “We have seen a sharp drop in economic optimism this month, especially marked among those groups more likely to vote remain in the EU referendum. Meanwhile, the divisions revealed by the Brexit vote remain (although there are signs that in the immediate aftermath people are feeling a bit more positive than they were before the result, though that could of course change): Britons are worried about the short-term economic impact, but more hopeful for the next ten to twenty years. Expectations for immigration, the number one issue for leave voters, are mixed – half think the numbers of EU immigration will be lower than if we had stayed in the EU, but only three in ten think it will have the same effect on immigration from the rest of the world.”