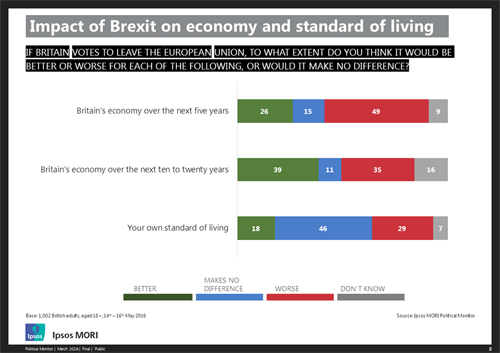 The survey also asked about the impact on a number of other issues if Britain voted to leave the European Union: 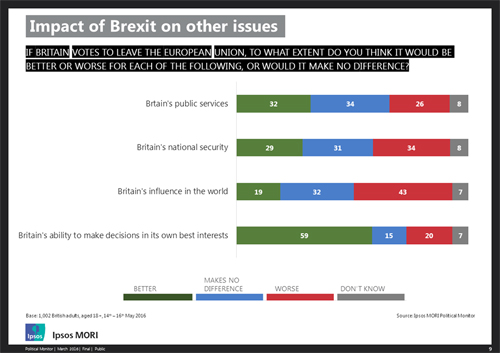 Three in ten (31%) agree with David Cameron’s position that Brexit would be worse for peace and stability in Europe compared with 5% who think it would be better and 58% who say it would make no difference.

Despite all the focus on the referendum only a quarter (26%) believes that the EU is one of the institutions that has the most impact on people's everyday lives. This compares with three in five (62%) choosing local councils, 55% saying the Government, 29% saying parliament and 20% saying the civil service. 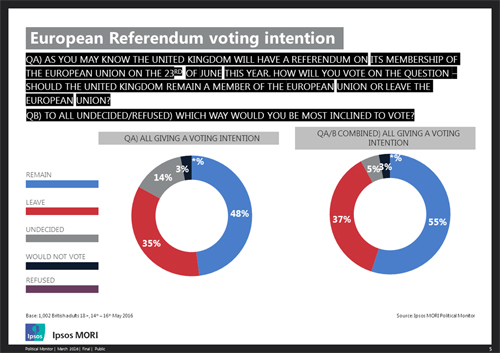 The largest shift in these results comes from the number of Conservatives who have gone from being marginally in favour of leaving the EU in last month’s poll to clearly being in favour of remain this month (60% say they would vote remain). With more than a month to go until the referendum it will be important to see if this Conservative support of remain lasts, especially as they are also the group most likely to say they may change their minds (36%). While we are still testing turnout models, leave supporters say they are more certain to vote (our standard turnout filter gives results of 56% remain, 40% leave) and are more likely to have definitely decided.

Our ongoing vote intention figures show the Conservatives still holding a slight lead over Labour. The Conservatives currently stand at 36% compared to Labour with 34%, the Liberal Democrats at 8% and UKIP at 10%.

“Remain has been boosted by a Conservative swing, but they are also more likely to change their mind, so in this volatile election, with voters divided over the short and long-term impacts of their decision, nothing can be taken for granted.”

Ipsos MORI interviewed a representative sample of 1,002 adults aged 18+ across Great Britain. Interviews were conducted by telephone 14th – 16th May 2016. This month we have also updated our weighting profile to the latest ONS and LFS population estimates. We have tested this weighting and have found the new weights make minimal difference to the overall results