Nearly three in ten men (28%) around the world think it’s acceptable to tell jokes or stories of a sexual nature at work, according to a new global survey to mark International Women’s Day.

The proportion of men in Britain who hold this view is the same as the global average. British men are much more accepting of such behaviour than their counterparts in countries including Turkey, Australia, Canada (18%), the US and Mexico.

By contrast, only 16% of women globally and in Britain say such jokes or stories are acceptable.

The survey of over 20,000 people in 27 countries was carried out by Ipsos MORI and the Global Institute for Women’s Leadership at King’s College London. It reveals attitudes towards workplaces that many would regard as toxic or at the very least not female-friendly, which have been shown to hold women back in their careers.

The survey finds significant differences in what women and men see as acceptable workplace behaviour, reveals where sexism is most likely to be challenged, and looks at whose careers are most likely to be affected by certain choices and responsibilities. 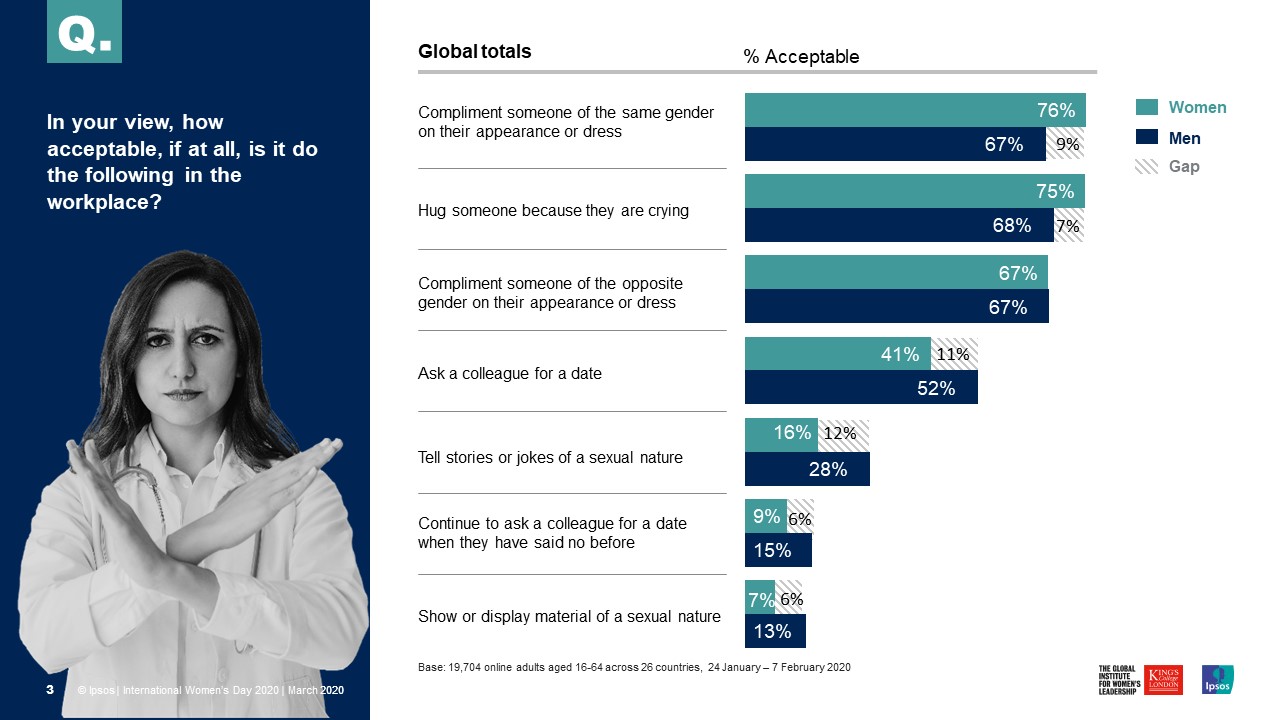 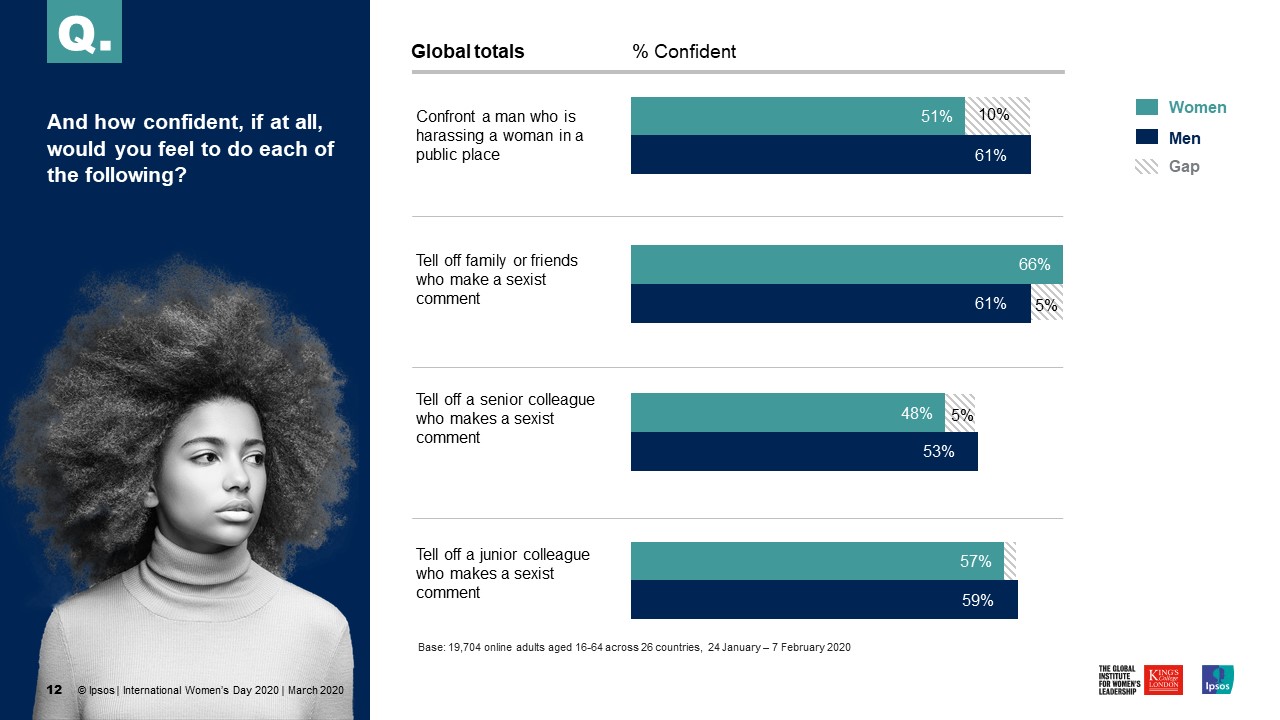 People in Britain think women’s careers are much more likely to be damaged than men’s because of certain choices or responsibilities. 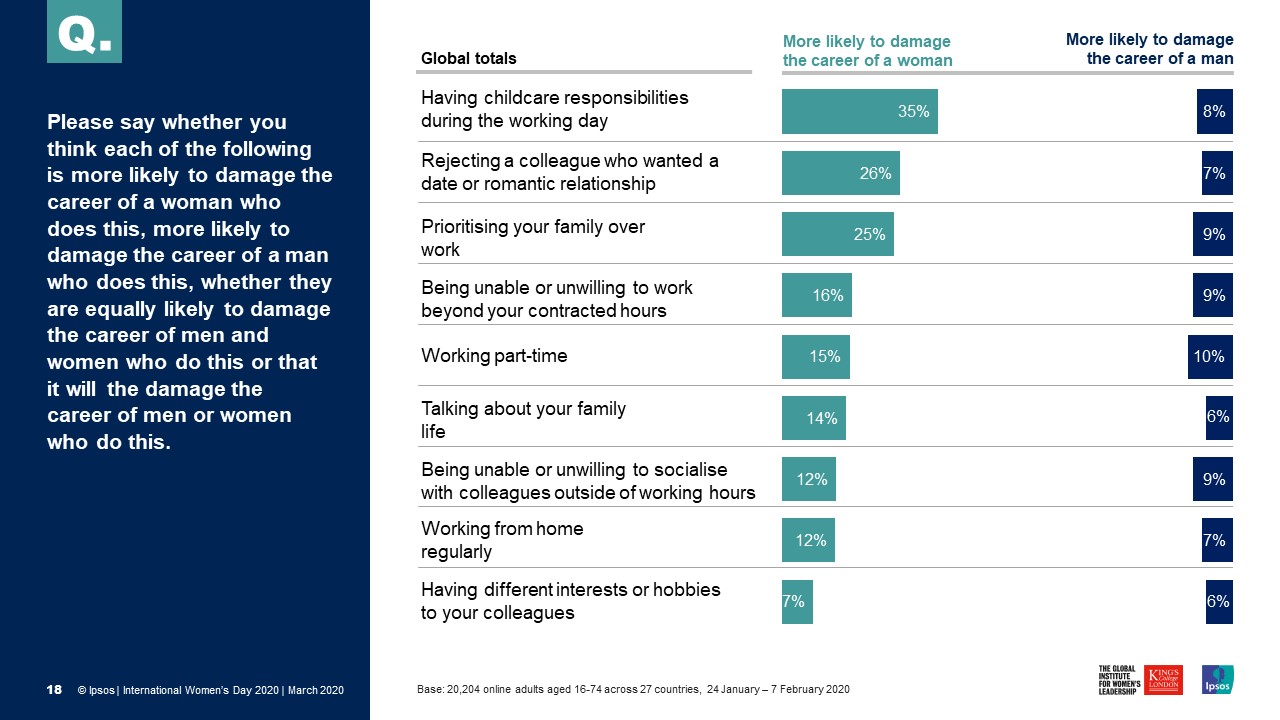 International Women’s Day is a great reminder each year to think about where we are headed, and how far we have come, in the fight for gender equality.  Our new research shows that we still have a way to go when it comes to levelling the playing field, especially in the workplace.  Our data shows that people feel women’s careers are significantly more at risk then men’s if they turn down a romantic advance, if they talk about their family life or don’t take part in social activities with colleagues.  However, there are some real positives coming through from the data, such as over half of men feeling confident to call people out if they make sexist comments.
Equality won’t happen without both men and women making changes and in the world of work, which is still dominated by men, we need more men to start prioritising equality and making a stand when required.

This research illustrates how far we still have to go to gain equality in the workplace and what is clear is that women cannot do it on their own. We need men to take action and for employers to support women who want to take on leadership roles.

These are the findings of a survey conducted in 27 countries via Global Advisor, the online survey platform of Ipsos, between 24 January - 7 February 2020.

For this survey, Ipsos interviewed a total of 20,204 adults aged:

The sample consists of 1,000+ individuals in each of Australia, Brazil, Canada, China, France, Germany, Great Britain, Italy, Japan, Spain, and the U.S., and of 500+ individuals in each of the other countries surveyed.  The data is weighted so each country’s sample composition best reflects the demographic profile of its adult population according to the most recent census data, and to give each country an equal weight in the total “global” sample.

Online surveys can be taken as representative of the general working-age population in Argentina, Australia, Belgium, Canada, France, Germany, Great Britain, Hungary, Italy, Japan, Netherlands, Poland, South Korea, Spain, Sweden, and the United States. Online samples in other countries surveyed are more urban, more educated and/or more affluent than the general population and the results should be viewed as reflecting the views of a more “connected” population.