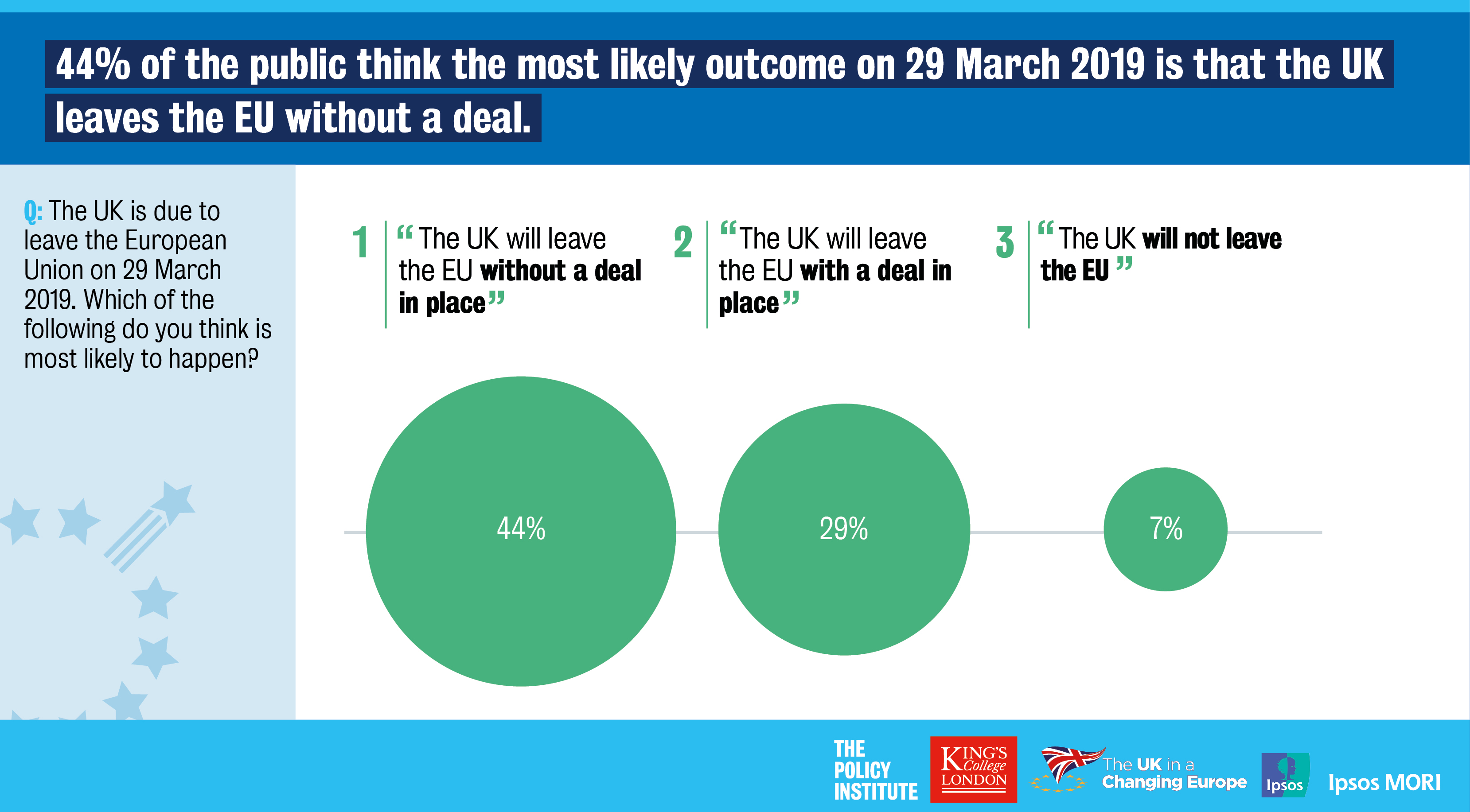 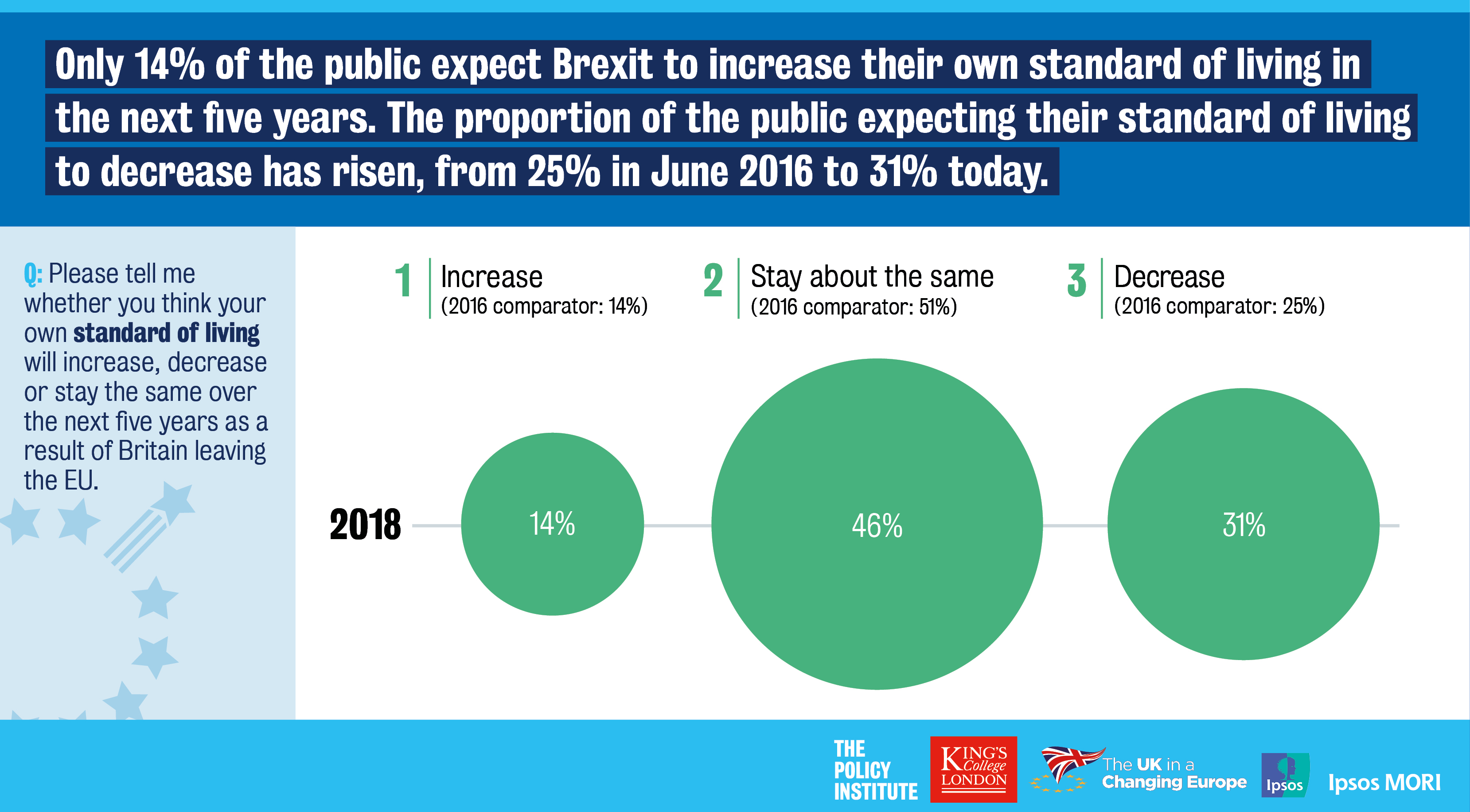 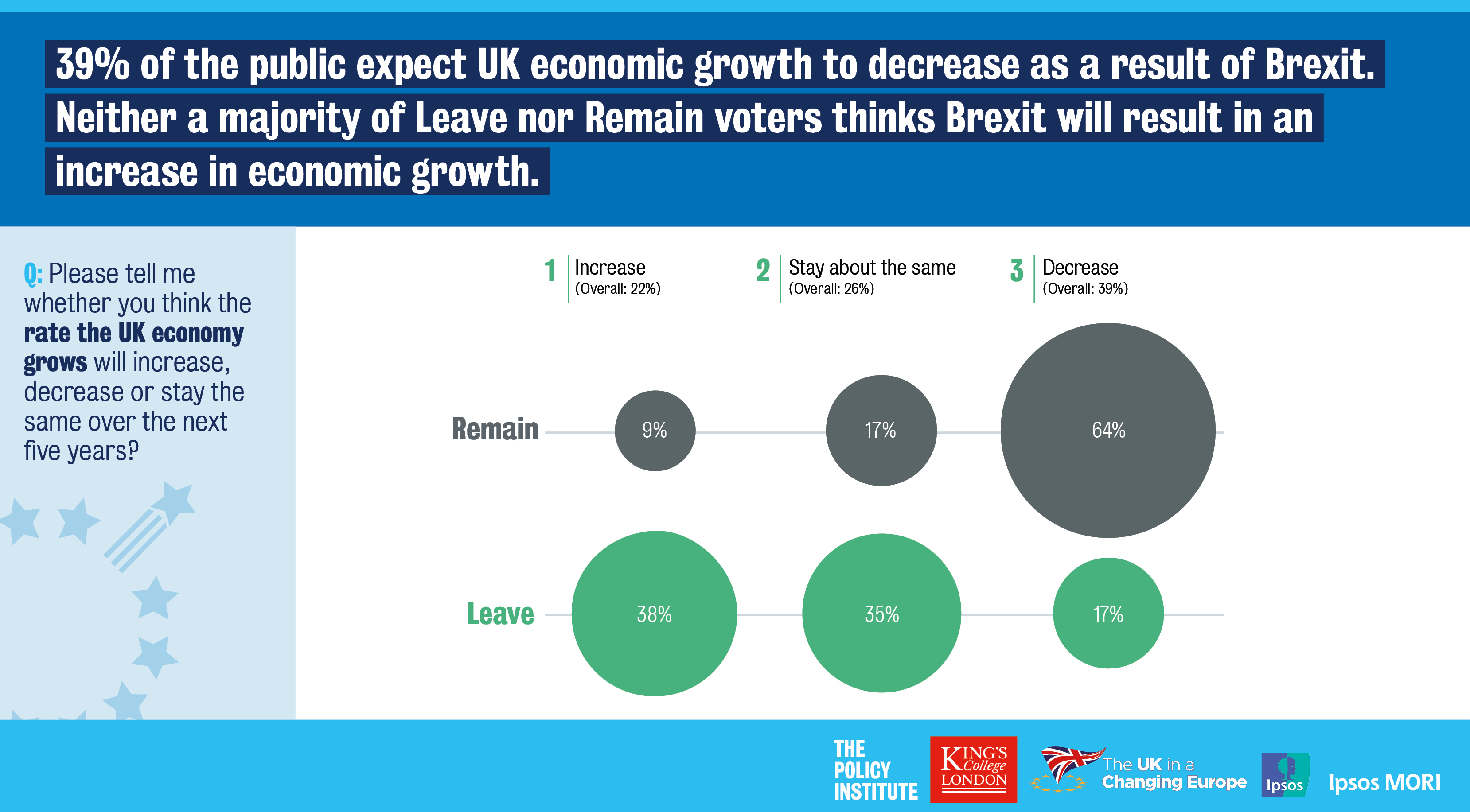 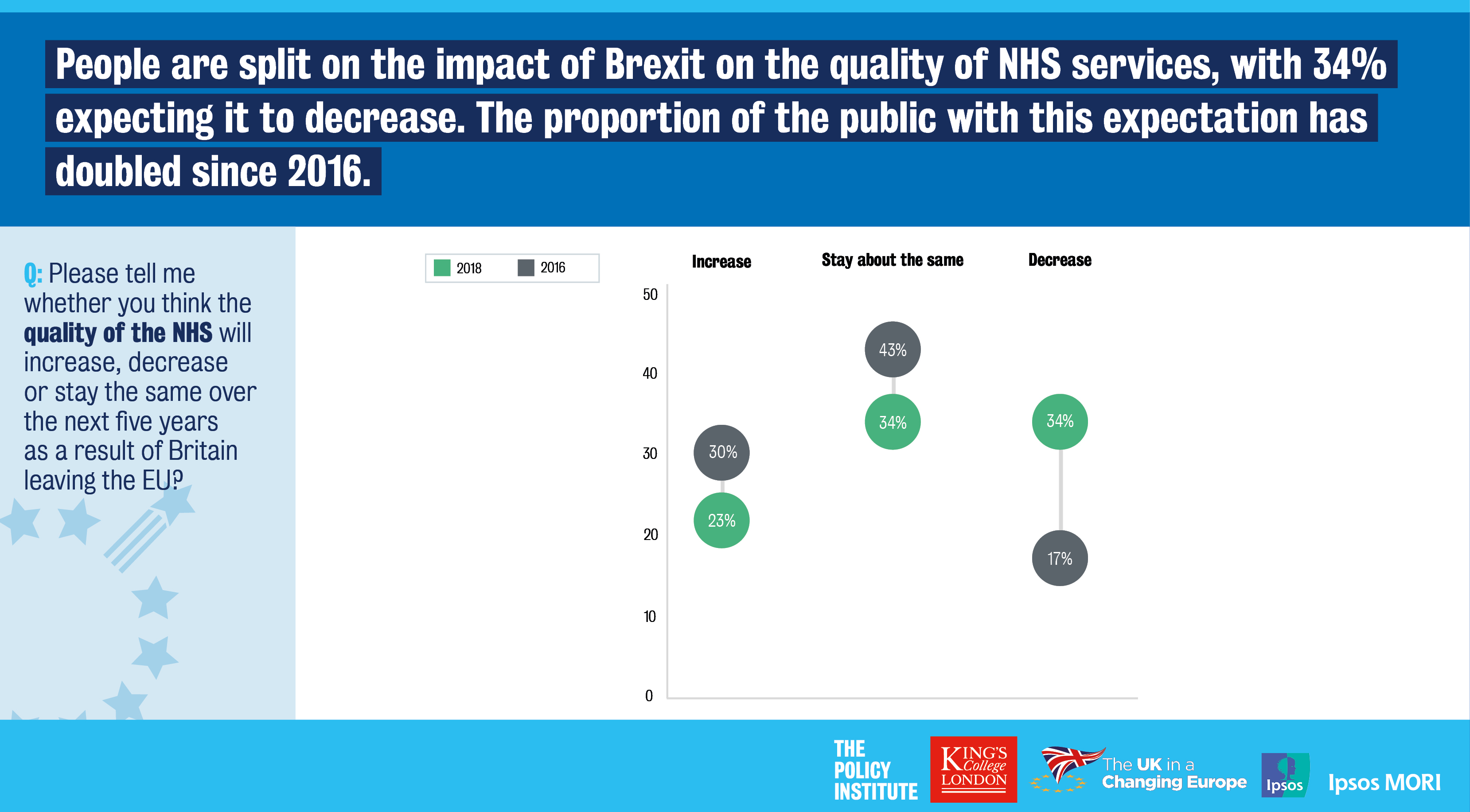 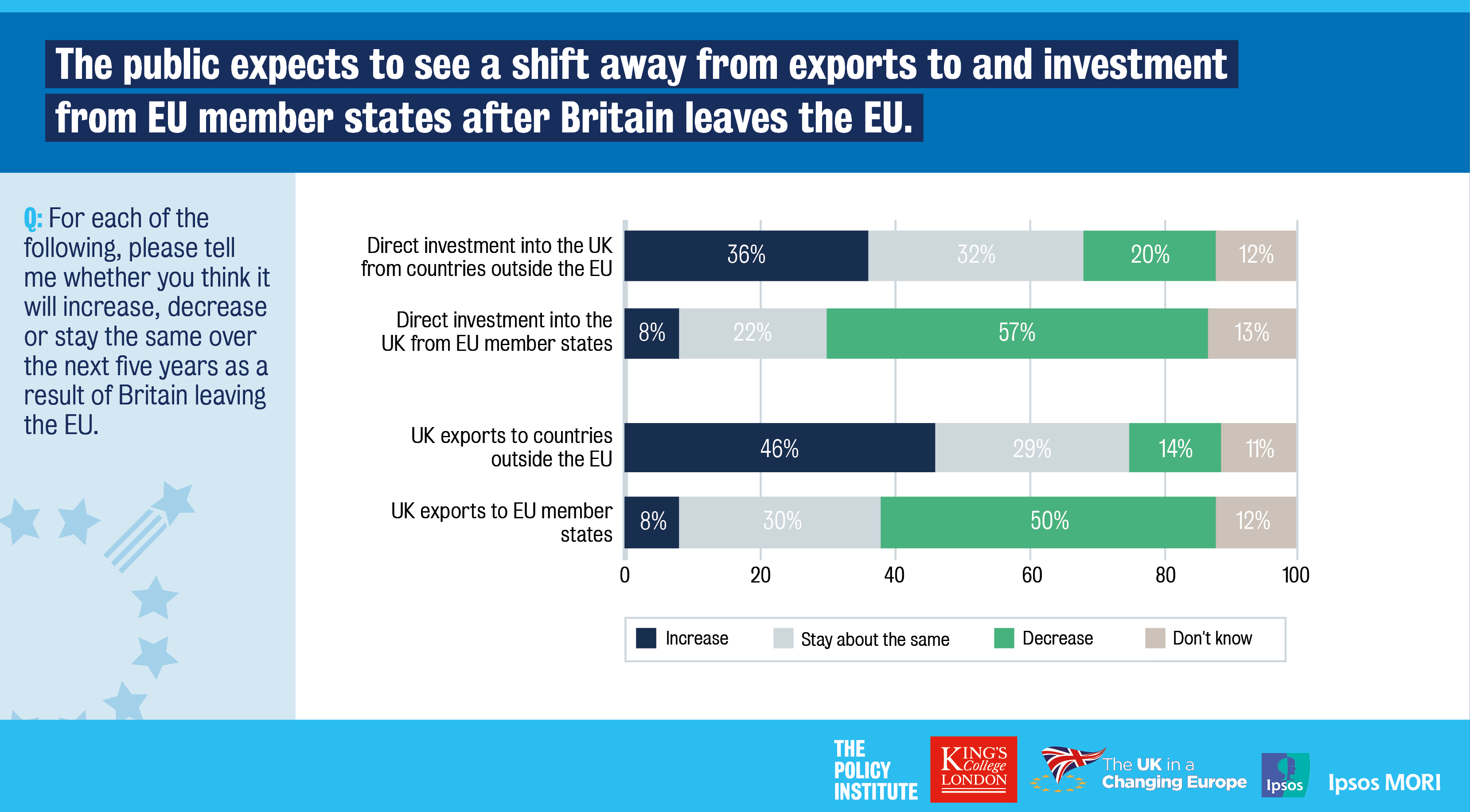 Over the course of 2018, the public’s confidence that the Prime Minister will achieve a good deal for Britain in the EU negotiations has fallen, and this latest data shows that expectations are low that Britain will leave the EU with a deal – especially among Remain supporters.    On the impacts of Brexit on the economy and the NHS, pessimists outnumber optimists – but there are about as many who think things will remain about the same, particularly when it comes to their own personal standard of living. One aspect though on which the public is more united is in predicting that Brexit will lead to a decrease in EU immigration – but the picture is less clear for immigration outside of the EU. But mostly, as we see our research elsewhere on Brexit, opinions are very divided, with an interaction between whether people are Leave or Remain supporters as well as their party politics.

Commenting on the findings, Professor Bobby Duffy, Director of the Policy Institute said:

There is little general optimism about the outcome of the Brexit negotiations and the ongoing impact of leaving the EU, particularly on living standards and economic growth.
But as with other aspects of our relationship with Europe, our predictions reveal the huge divisions in the country – different groups see the future very differently, with Conservative and Leave supporters more optimistic that Brexit will have little economic impact on the UK, while reducing EU immigration.
There are, however, some signs of growing unease among the public since we last asked these questions just before the EU Referendum.  There has been an increase in the proportion of people expecting their own living standards to decline, and a doubling of the proportion expecting the quality of services from the NHS to decline, now a third of the public.

Ipsos MORI interviewed a representative sample of 2,206 adults aged 18-75 across the United Kingdom. Interviews were conducted online between 28th September and 3rd October 2018. Data are weighted to the profile of the population.