A new Ipsos survey which compares countries’ acceptance of social and cultural diversity shows that Canada and the United States have the most inclusive definition of nationality, followed by South Africa, France, and Australia. These countries score highest on an Inclusiveness Index reflecting social acceptance of diversity as it applies to religion, immigration, sexual orientation and gender identity, political views, and criminal background.   Britain ranks 10th in the overall index.

The Overall Inclusiveness Index is based on the findings of an Ipsos Global Advisor survey of over 20,700 men and women aged under 65 in 27 countries online.  Respondents were asked about as many as 28 types of people and for each type, they were asked if they consider such a person to be a “real” national (e.g., “a real Briton” in Great Britain., “a real American” in the US, etc.) or not. The Overall Inclusiveness Index is calculated by taking an average of the net scores (“real” percentage minus “not real” percentage) for each of the six constructs: 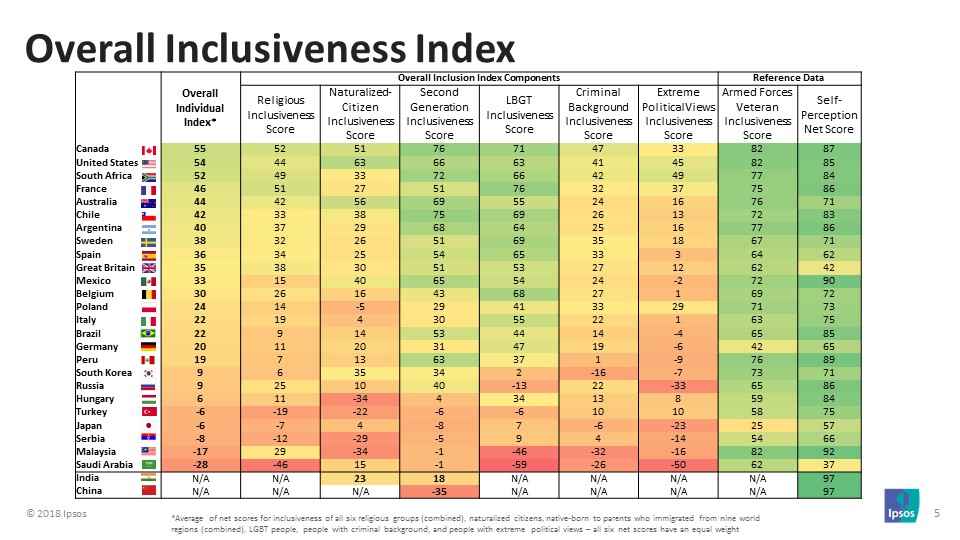 Six in ten of the British public (59%) think of themselves as a ‘real Brit’ but less than two in ten (17%) do not.  Globally, Britons rank lowest on this measure against an average of 84%.  Younger people are less inclined to consider themselves real Brits, with 22% of under 35s saying they do not consider themselves a real Brit compared to just 12% of those aged over 50.

On immigration, Britain is slightly more inclusive than the global average.  Half of the public (52%) think that an immigrant who has become a citizen of the UK can be considered a real Brit compared with one in five (22%) who do not. But for immigrants who have lived most of their life in Britain and not taken citizenship, the public is split; 35% think they are real Brits and 35% think not.

The ability to speak English is also seen as real marker of being a true Brit.  Over half (56%) of the public think that immigrants who have become citizens and are fluent in English can be considered Brits.  This falls to three in ten (30%) for those are not fluent in English. Similarly, marrying someone British does not necessarily make someone be seen as a real Brit – 34% think it does and the same proportion thinks it does not.  Just one in four (23%) think that someone who is an illegal immigrant but has lived in the country most of their life can be considered a real Brit compared with 46% who think they can’t.

The majority of the public (60%) believes that someone who is gay, lesbian, bisexual or transgender can be considered a real Brit (compared to a global average of 53%).  Britain is in line with Germany (61%) and Italy (63%) but lags behind France (81%).

The public feel that extreme political views are more at odds with Britishness with just 37% considering someone with extreme political views as a real Brit.  A quarter (25%) say they cannot be considered a real Brit and 38% are unsure.  On the other hand, someone who has served in the Armed Forces is clearly seen as a real Briton – by 68% (although slightly below the global average).
Brits say they are more well-travelled than most with over four in five (84%) having either travelled, been born or lived outside of the county compared with a global average of 70%.

Britishness is bound up with multiple identities, and while the majority of the British people do consider themselves a ‘real Brit’, this sense of attachment to nationality is higher in other countries in this study.  However, Brits are well travelled compared to many other countries and are relatively inclusive when it comes to other aspects such as people who are LGBT, and for some religious beliefs (although only lukewarm for others).  On immigration, views are more nuanced – the majority feel that when immigrants take citizenship they are truly British, and this is stronger for second-generation immigrants.  But being considered a true Brit is not an automatic right and for many is contingent on a number of factors – such as speaking English and having a job.  And only a minority of people think those who have lived here all their lives but don’t have the legal right to be here can be considered real Brits.  The public is also more divided on whether those who have criminal records and those with extreme political views can be considered true Brits.

To assess attitudes towards religious diversity, respondents were asked whether they consider each of a Christian, a Muslim, a Jew, a Buddhist, a Hindu and an atheist as a “real” national of their country. Of the 25 countries where questions on religion were asked*, Canada, France, South Africa, and the U.S. are the only four countries where full majorities (i.e., at least 50% of adults surveyed) consider members of all six religious groups as “real” nationals.

In Belgium, Chile, Germany, Hungary, Italy, Mexico, Poland, Russia, and Spain, only Christians and atheists are seen by majorities as “real” nationals.

Members of only one religious group are thought of as “real” nationals by majorities in five countries: Christians in Brazil, Peru and Serbia; Muslims in Saudi Arabia and Turkey.
In both Japan and South Korea, the most common answer for members of all religious groups is “not sure”.

Just under half (48%) of adults asked across 25 countries* think that an immigrant who has become a citizen of their country is a “real” national while 31% consider that he or she is not a “real” national and 21% are not sure.

Globally, the percentage of adults who consider an undocumented immigrant who has lived in the country most of their life to be a “real” national is 29 points lower than for an immigrant who is a naturalised citizen. The penalty for being undocumented is highest in the three countries most likely to view naturalised citizens as “real” nationals: the U.S., Canada, South Africa, Australia, and South Korea (42 points or more). The only country where people in this situation are viewed as “real” nationals by a plurality is Mexico (45%), possibly taking into consideration the status of “Dreamers” in the United States.

In every country surveyed, an immigrant who is married to a native (without any mention of their legal status) is less likely to be viewed as a “real” national than is an immigrant who has become a citizen (32% vs. 48%, a 16-point difference). The difference is highest in the U.S., Canada, and South Africa (25 points or more).

Across the 27 countries surveyed, 58% view locally-born and raised children of immigrants as “real” nationals while 21% say they are “not real” nationals and another 21% are not sure. Views about those who are often referred to as “second generation” people vary widely across countries.

Majorities in 16 of the 25 countries* where the question was asked (including 75% or more in France, Canada, Chile, Belgium, and Sweden) consider someone who is gay, lesbian, bisexual or transgender to be a “real” national. However, a majority or a plurality in four countries (Japan, Serbia, South Korea and Turkey) are not sure and a majority in two countries (Saudi Arabia and Malaysia) think an LGBT person is not a “real” national.

People with a Criminal Background

Three out of four adults globally (73%), including at least 65% of adults in all but three of 25 countries*, think that someone who has served in the armed forces is a “real” national. This view is most widespread in the U.S. (86%) as well as Malaysia and Canada (85% each). However, it is shared by only three in five adults in Serbia and Germany (59% each) while a majority in Japan (62%) are not sure.

Self-Perception as a “Real” National

On average across the 27 countries surveyed, 70% have ever been in another country during their lifetime. Above-average levels of international experience are seen in all European countries (excluding Russia), Australia, Canada, and China. Overall, 16% were born abroad or have lived abroad with the highest proportions (around three in ten) in Australia, Saudi Arabia, and Sweden and the lowest (6%) in Brazil. Globally, 62% have traveled outside of their country with wide variations across countries – from 80% or more in Serbia, Sweden and Belgium to less than 40% in Brazil and Mexico.

Overall, 68% across the 27 countries have some international connection, i.e., interactions with relatives, friends or work contacts who live abroad or with relatives, friends or casual acquaintances who were born abroad. Countries with the largest percentages of people having some international contacts (80%+) are Serbia, Sweden, South Africa, and India. The country where it is by far the lowest is Japan. 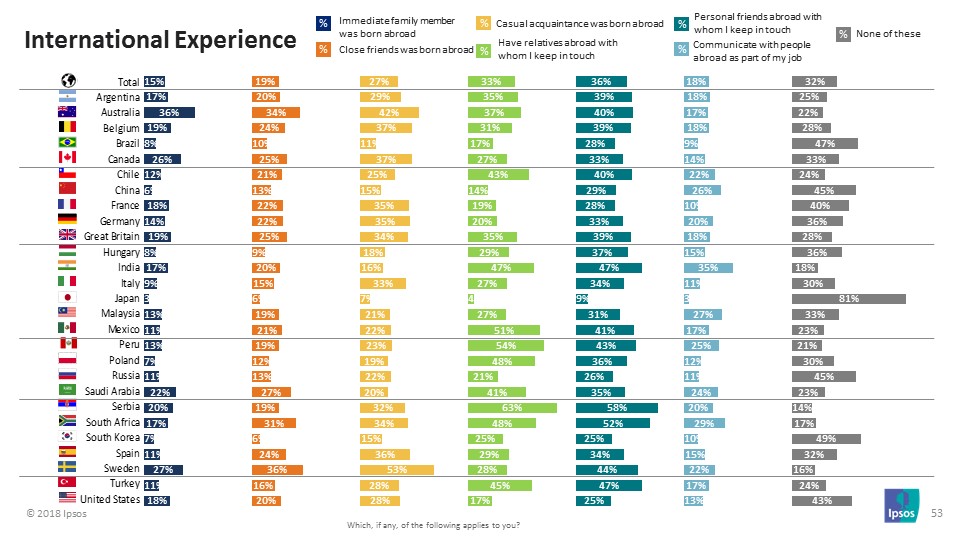