Echoing recent trends, concern about climate change was high: 82% were concerned about climate change generally, and 76% were concerned about its impacts on Scotland specifically. Around half (49%) said their level of concern had increased over the last 12 months, while the same proportion said it had remained the same (and just 1% said it had decreased). 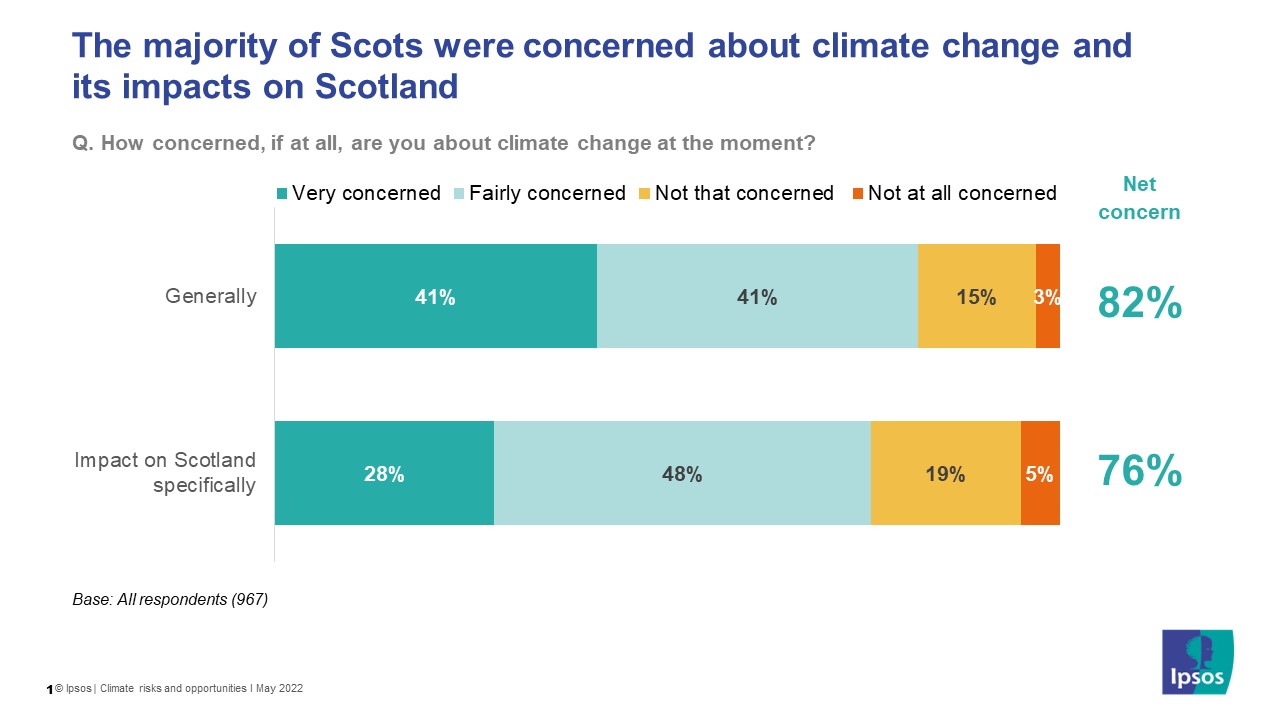 Almost two thirds (60%) felt that Scotland was already feeling the effects of climate change, while a further 13% said we would feel them within the next 10 years and 21% some time beyond that.

Extreme weather events were generally seen as becoming more common in Scotland, particularly floods (83% felt these were more common), milder/wetter winters (79%), heavy rain/storms (77%) and heatwaves (67%). Findings may reflect the timing of the survey, which took place during a period of extreme weather (Scotland was experiencing the impacts of Storm Arwen during the same week as the survey).

Flooding and heavy rain/storms were seen as the most pressing problems for Scotland – around half said these were already serious problems. Other weather-related events were generally viewed more as future problems. 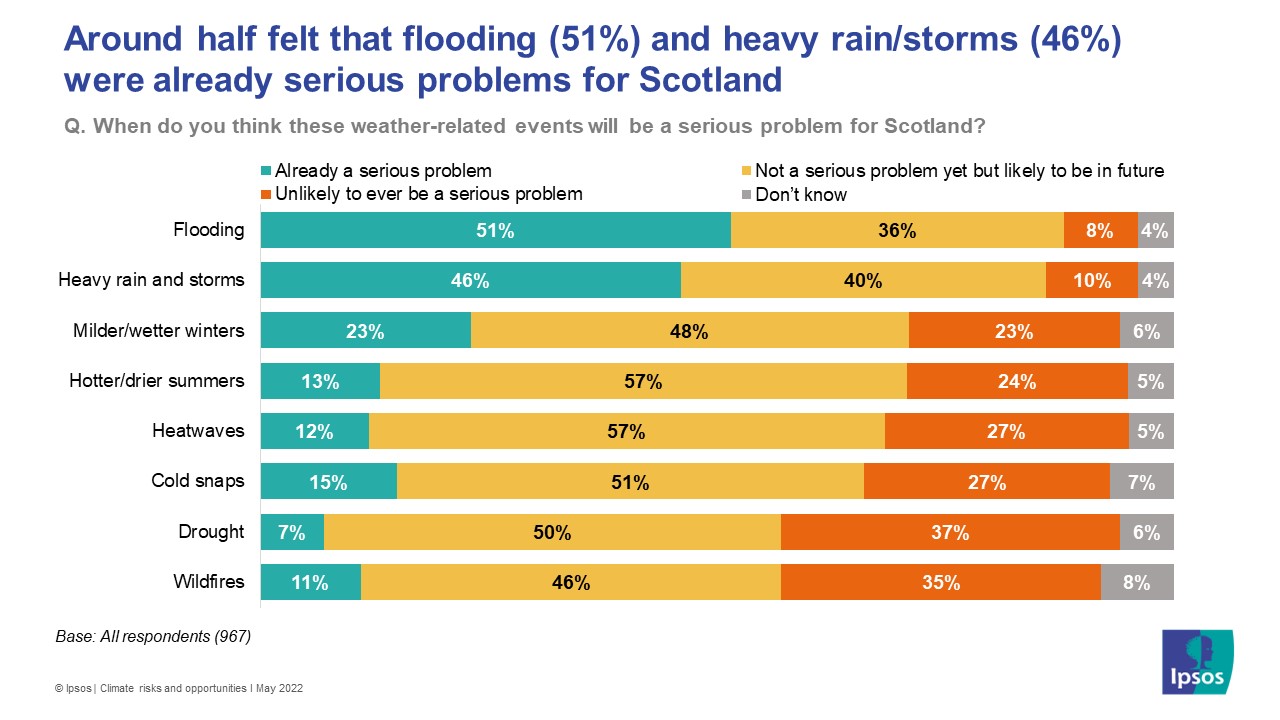 Risks to natural and built environment

Awareness of risks to the natural environment in Scotland was generally high, with the most well-known risks being: loss of or decline in wildlife in seas and rivers (70%), coastal erosion (69%) and loss or decline in wildlife on the land (67%). Similarly, awareness of risks to the built environment was also high, particularly in relation to: damage to roads, rail lines and bridges (84%), disruption to electricity supply (73%), and damage to buildings (71%).

As with extreme weather, respondents were less likely to view risks to the natural and built environment as serious problems for their local area than for Scotland as a whole.

Just over three quarters (78%) agreed that we need to adapt to climate change immediately and urgently. 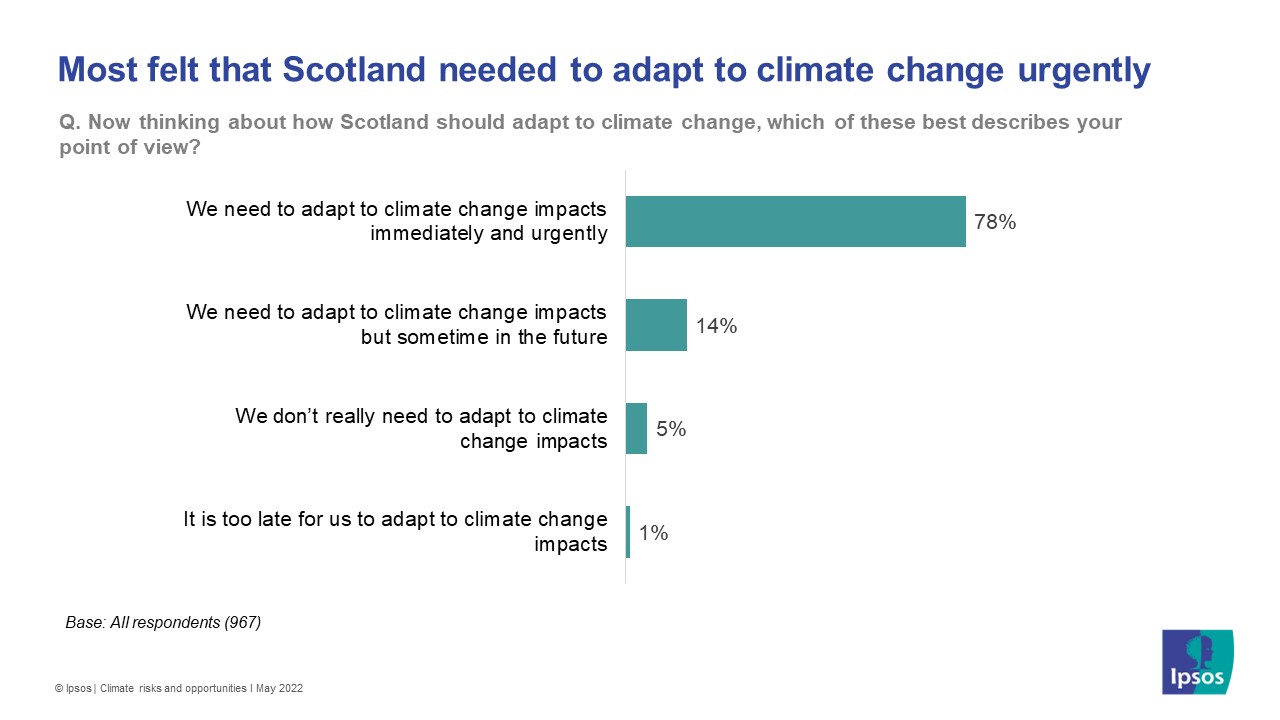 88% had either already taken or planned to take action to adapt to climate change. The most common actions likely to be taken in future related to helping or supporting other people, rather than making physical changes to properties. The most common were: supporting charities (55%), persuading others to take action (52%), and helping support people in the community vulnerable to flooding or heatwaves (49%).

Over three quarters (78%) were confident that people in their local community would act together if they were faced with severe events (such as flooding or extreme weather) and two thirds (66%) said they would be willing to give up some of their time to help their local community prepare for the impacts of climate change. There was less confidence in the Scottish Government taking action or in the commitment of world leaders to tackle climate change. 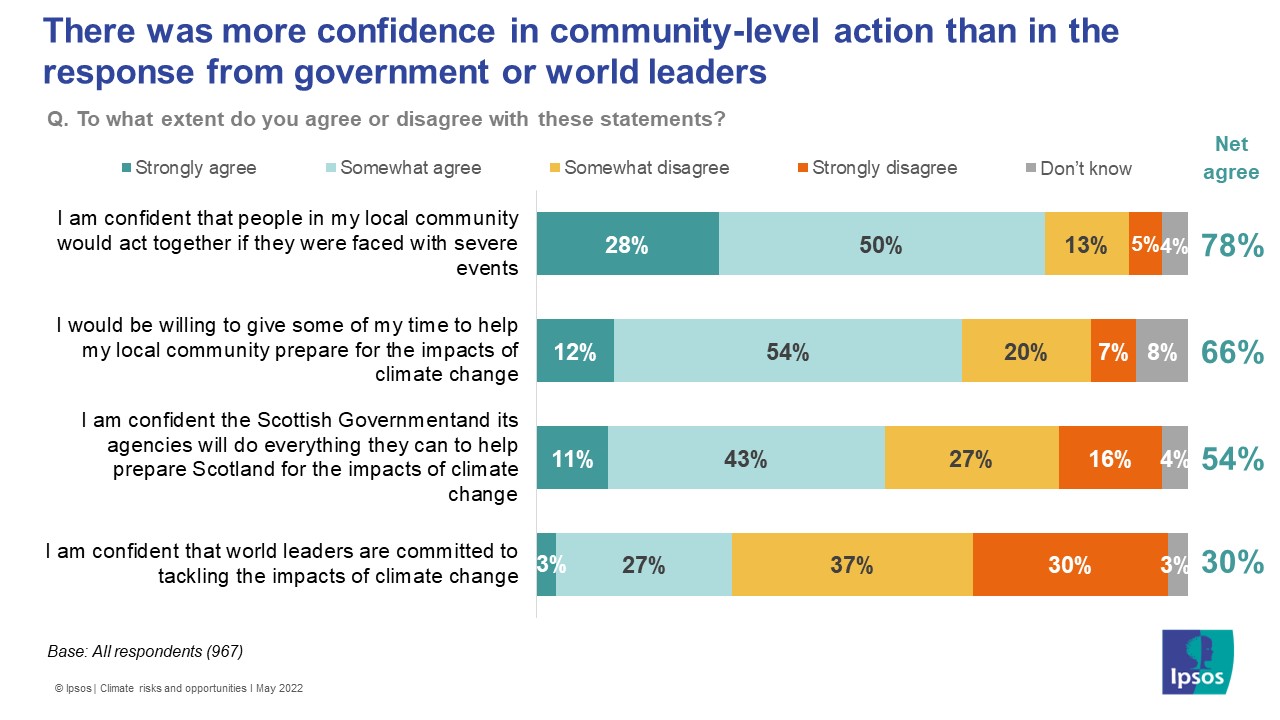