New polling by Ipsos shows more than half of Britons aged 18-75 (56%) believe Marcus Rashford is doing a good job at holding the government to account over its Coronavirus response, more than any others included in the poll.

Piers Morgan is seen as doing well at holding the Government to account by 32%, while 31% see TV and radio journalists in general as doing a good job, a fall from 40% when asked in April 2020. Newspaper journalists in general are seen as effective in holding the Government to account by a quarter of Britons (25%), down from 30% last spring. 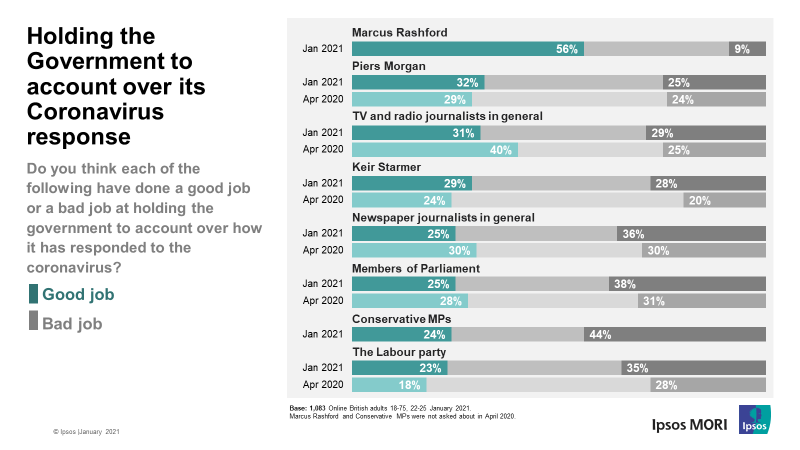 Around 3 in 10 (29%) believe the Keir Starmer is doing well, however opinion is split with a further 28% saying he is doing a bad job at holding the Government to account over their response to Coronavirus.

Other Parliamentary bodies are not seen so positively. Around a quarter say Members of Parliament (25%), Conservative MPs (24%) and Labour MPs (23%) are doing a good job, more say they are doing badly (38%, 44% and 35% respectively.

More people feel Marcus Rashford - a 23-year old footballer - is holding the government to account than are the opposition, Conservative backbenchers or indeed the media itself. He is helped by the fact that he is campaigning on a simple issue - free school meals - that neatly encapsulates the sharpened inequalities that CV19 has revealed.