With just one month to go until the Government’s next budget announcement Ipsos reveals for the first time since 2013 more of the public are dissatisfied than satisfied with the way George Osborne is doing his job as Chancellor of the Exchequer. The new poll finds that two in five (40%) are satisfied with Mr Osborne (down 4 points from July) compared to 46% who are dissatisfied (up 2 points) leaving the Chancellor with a net satisfaction score of -6 (down 6 points). 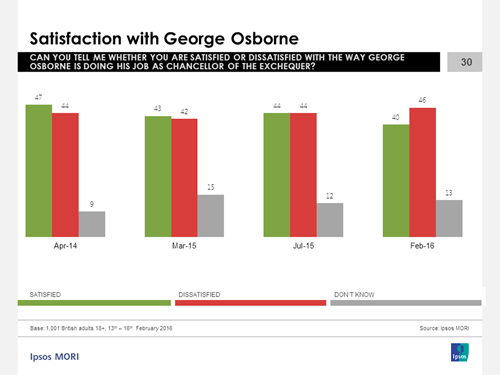 Despite the dip in personal satisfaction ratings for George Osborne he holds a strong lead over his counterpart John McDonnell of the Labour Party. When asked who would make the most capable Chancellor 46% of the public back George Osborne compared to three in ten (29%) who back John McDonnell. This is bigger than any lead George Osborne had over Ed Balls. Among non-Labour supporters George Osborne is well ahead by 70% to 12%, while John McDonnell has a smaller lead among non-Conservatives at 47% to 26%, rising to 65% to 13% among Labour voters. 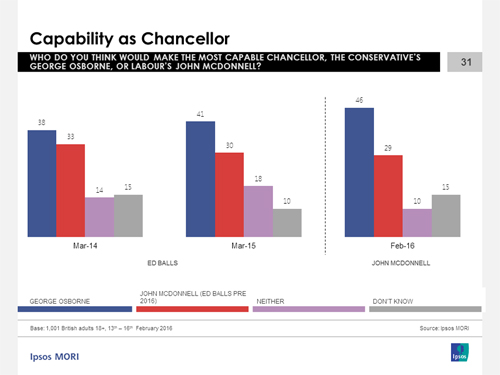 George Osborne may be fighting against an increasing perception that the economy is getting worse. When asked if the general economic condition of the country will improve, stay the same, or get worse over the next 12 months, one in four (25%) say it will improve (down 1 point from January) compared to 44% who say it will get worse (up 5 points). One in four (26%) believe it will stay the same (down 5 points). This leaves the overall Economic Optimism Index (‘will improve’ minus ‘get worse’) at -19 (down 6 points). 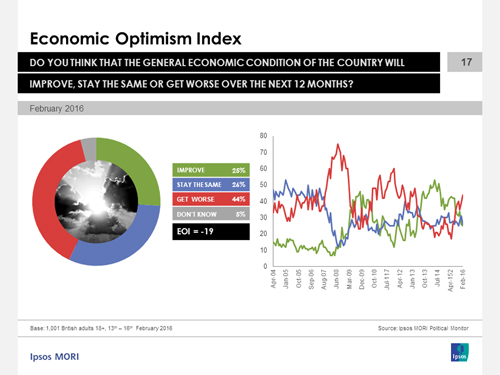 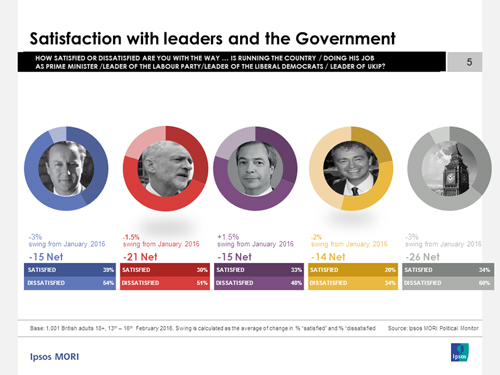 "The record levels of economic optimism generated before the election have long gone, which has seen a slip in the Chancellor’s personal ratings (although still above his worst during the ‘omnishambles crisis’). But he is still ahead of Labour’s John McDonnell among nearly every group, other than young people and Labour supporters.”

Ipsos interviewed a representative sample of 1,001 adults aged 18+ across Great Britain. Interviews were conducted by telephone 13-16 February 2016. Data are weighted to match the profile of the population.