As the coronavirus advanced across the globe, disinformation and conspiracy theories sprung up along with it. The virus’ many unknowns continue to mystify even public health officials, creating a situation ideal for disinformation to spread like wildfire across social media networks and even some established media networks.

Today, Americans disagree on a range of issues as varied as the accuracy of the virus’ official death toll, its true origins, and whether they would be willing to take a vaccine against the coronavirus if one were available. As in many other areas of American life these days, it is as if two sets of alternate realities exist. Ipsos research sheds light on where those disparities in belief most commonly lie.

Among the many sources of disinformation that have sprung up around the coronavirus, one of the latest to go viral is the documentary-style video “Plandemic,” which, among other conspiracy theories, claims that a vaccine could kill millions of people. This video racked up millions of views before it was removed from both YouTube and Facebook. Its removal has only sparked further claims of a “cover-up” online.

For now, just 25% of Americans say that they would be unlikely to take a coronavirus vaccine if it were developed, according to Ipsos/ABC News polling. This is better than the 43% of Americans who forgo annual flu vaccines, but is still at the lower end of the immunity spectrum. To prevent the coronavirus from spiraling out of control again, somewhere between 70% to 90% of the population would need to be vaccinated or achieve immunity by being exposed to the virus. In the long run, anti-vaccination attitudes could inhibit efforts to curtail the coronavirus if fears about vaccines become widespread enough. 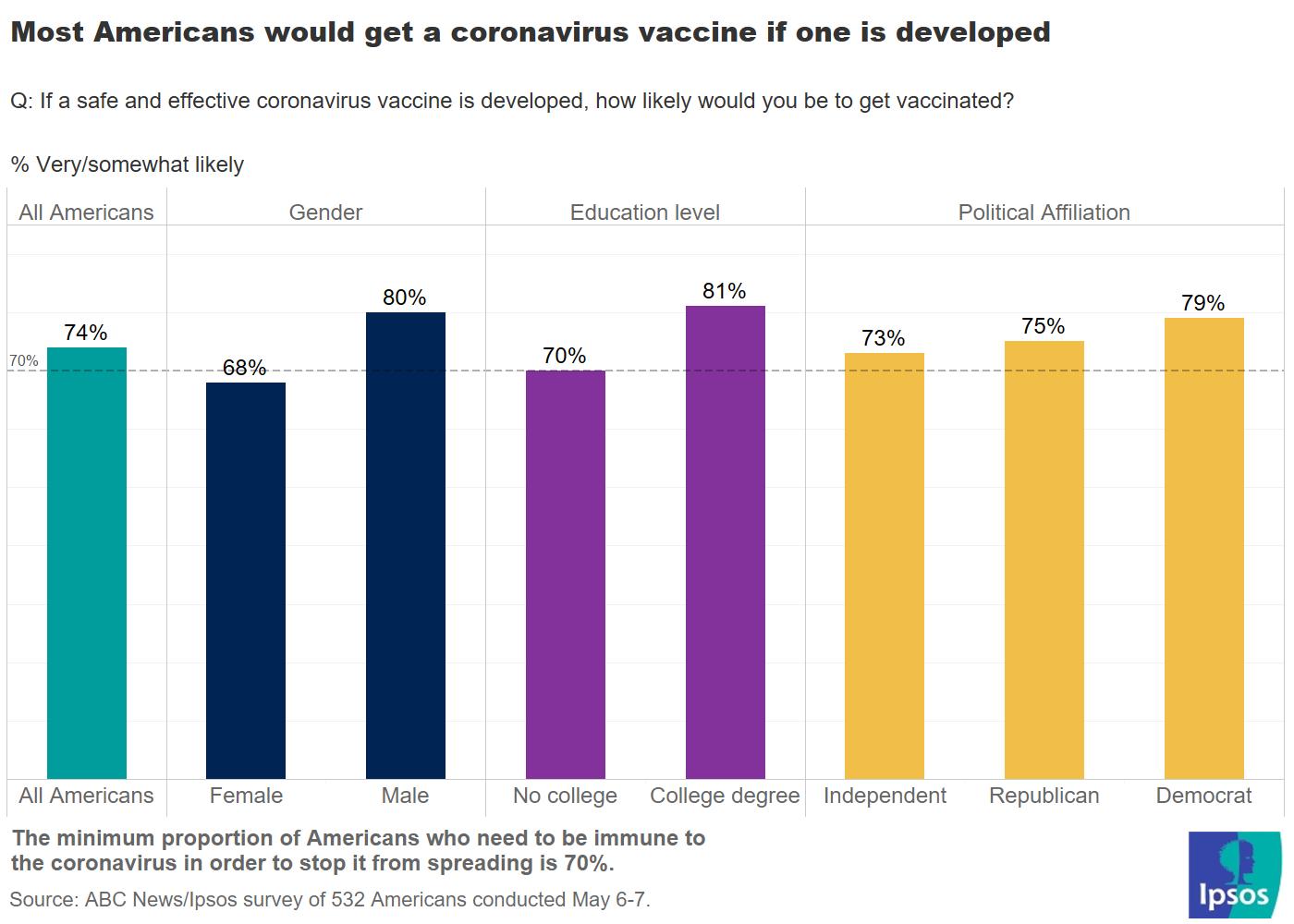 Other disinformation circulating about the coronavirus links back to the mortality rate. The official count is at more than 1.4 million confirmed cases and more than 89,000 deaths in the United States alone, though health experts believe this is likely an undercount due to the lack of widespread testing.

The proportion who believe the numbers are inflated is even higher among FOX News viewers. This becomes less surprising when considering the number of FOX News personalities who have promoted the theory that the death count is inflated or a hoax designed to impeach the president (several of the more outspoken have since parted way with the network, as it attempts to clamp down on disinformation). Where Americans get news about the coronavirus is strongly related to what they view as facts. 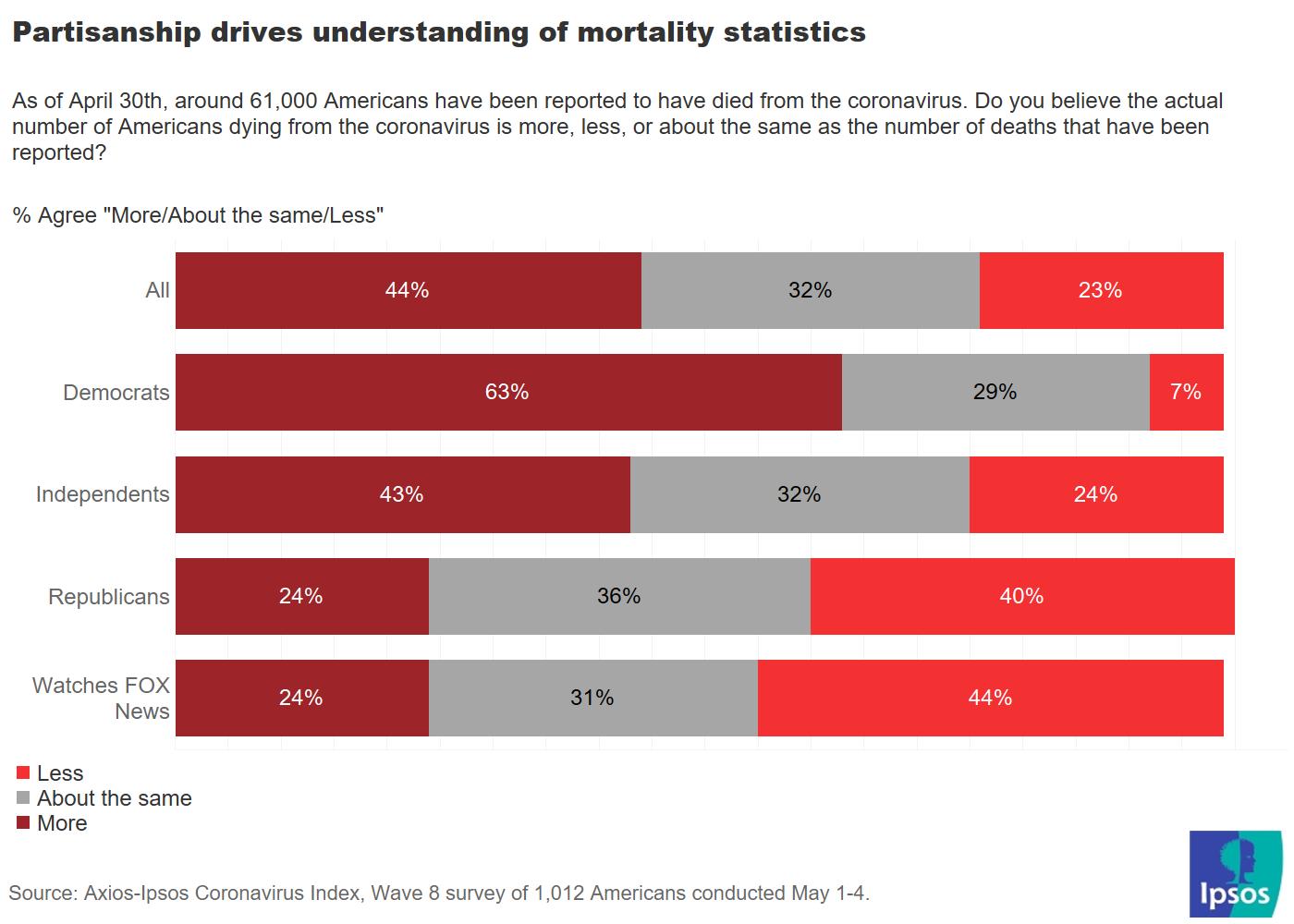 Finally, Americans disagree on the origins of the coronavirus. The virus’ unclear origins in Wuhan, China have given rise to a slew of conspiracy theories and misconceptions. Health experts believe that most likely, the virus originated in the wild and was transmitted from animals to humans, but this simple explanation hasn’t caught on with all Americans. Some believe instead that the virus was deliberately created in a lab in China, or that it was designed as a bioweapon, or is being orchestrated by a global elite.

Ipsos/Center for Public Integrity research offers some insight into how widespread these beliefs are. The majority of Americans believe that the coronavirus is a natural disaster, while 44% put the blame at the feet of “specific people or organizations.” Again, partisanship drives perceptions of the virus’ origins, with 68% of Democrats and 40% of Republicans attributing the pandemic to the forces of nature.

So, who are those “specific people or organizations” that 44% of Americans blame for the pandemic? It’s a mix, but 66% of that group attribute the pandemic to China in some way – unsurprising given current political rhetoric and a president who repeatedly refers to the coronavirus as the “China virus.” Another 12% blame the U.S. government, government in general, or another government. A tiny 3% believe it is a viral/biological war or attack. 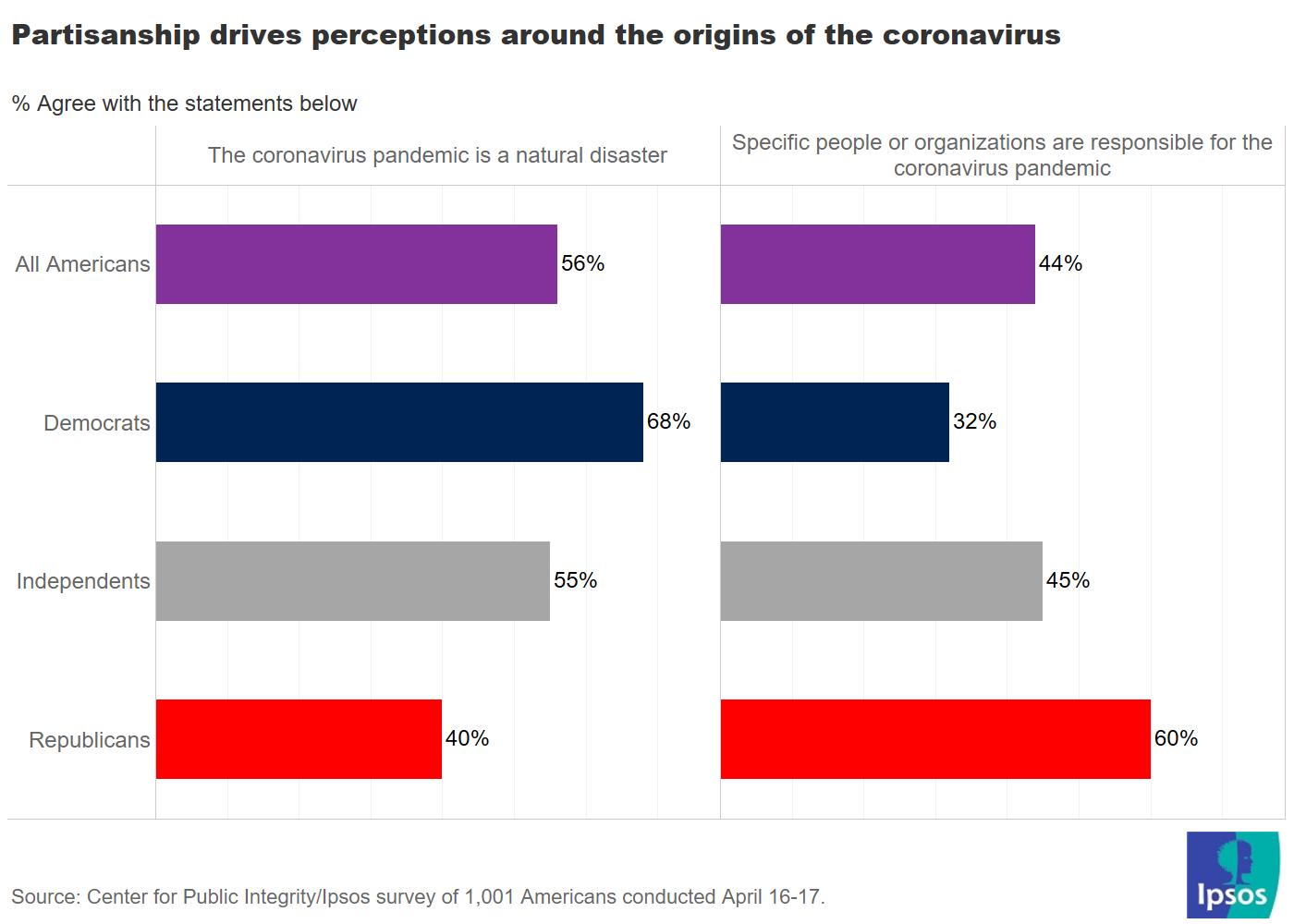 While it’s easy to laugh off some of the more outlandish ideas about the coronavirus currently in vogue, it’s critical to remember where they’re coming from. Conspiracy theories are nothing new: it is an entirely natural human impulse to fill in the gaps of unknown and confusing situations with a compelling story. During a pandemic, however, disinformation takes on much more sinister dimensions, particularly when it damages efforts to protect the public health.

The challenge going forward is as facts and substantiated theories are developed, can they replace the conspiracy theories that came first? This will be complicated by the partisan world we find ourselves in today. If anything, the pandemic has accelerated pre-existing trends in hyper-partisanship and declining trust in institutions. These forces helped bring us to our current moment in history, and as we move forward, will likely make it difficult for the nation to move in lockstep to confront this common threat. Given the increasing partisan distribution of this ‘fake news’, it seems unlikely that both sides of the political aisle will agree to a set of facts anytime soon.