The piece that follows provides researchers and marketers with the “why” behind the “what” of African American travel, with a particular focus on an active and financially robust subgroup: affluent African Americans. 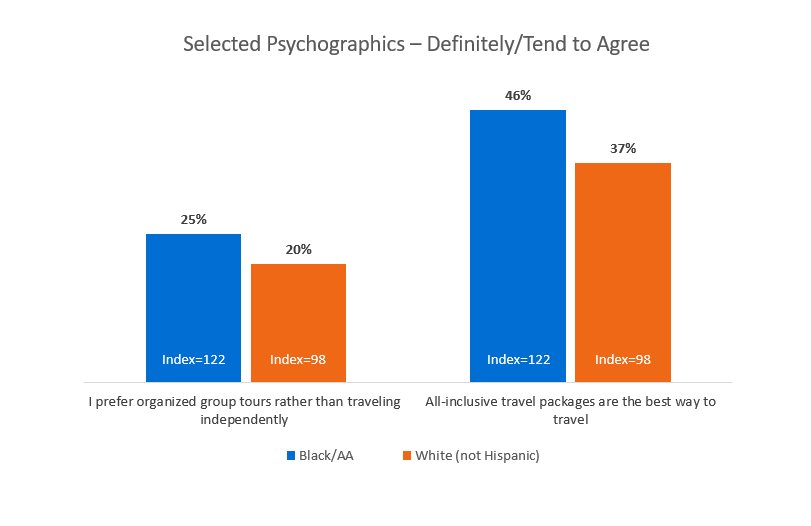 Travel planning for African Americans, through most of the 20th century, like most activities, was dominated by Jim Crow.  The legal underpinnings for Jim Crow laws, which institutionalized segregation in public accommodations, are found in the United States Supreme Court decision of 1896: Plessy v. Ferguson. In that case, affluent vacation African American travelers from New Orleans attempted to overrule state segregation laws that restricted their train travel to resorts on the Gulf Coast. (2) That decision codified “separate but equal” into law, restricting African Americans to facilities and institutions that were never equal, but were created to be a constant reminder of white superiority. As a result of Jim Crow laws and practices throughout the United States, the African American traveler had to conduct much research prior to any trip that involved leaving what was familiar. Where could the African American traveler eat, buy gas, or find a place to sleep in safety?  Word of mouth could provide some answers to these questions, but how about getting information about accommodations outside of one’s network? From the mid-nineteenth century on, much support came from private clubs and for a good part of the 20th century from a printed version of word of mouth: “The Negro Motorist Green Book”.

The roots of these social clubs are traced to the black burial societies that were established shortly after the Civil War.  Burial societies provided insurance to cover funeral costs and soon became social as well. (3) A crucial transition in the function of many clubs occurred with the advent of integration, the rise of Black affluence and the wider social options available to African Americans. New social clubs emerged that were mostly centered on activities that have few Black participants. (4)  Clubs dedicated to Black skiers, Black scuba divers and other activities came to the fore. As one ski club member put it. “… you would feel a little strange going into an all-white sport with no friends and no encouragement.” (5) A scuba diver added, “We always have the additional stories of the staring. There’s always going to be the staring.” (6) The influence of the Black social club structure goes beyond clubs dedicated to travel alone.  Activities with traditionally low African American participation all seem to have their clubs. The club structure, whether it be a club dedicated to Black bourbon drinkers or something else, has implications for travel.

“Group travel is twice as popular among African Americans than whites, according to Charlie Presley, the founder of the African-American Travel Conference, perhaps pointing to a sense of security in numbers as well as the proliferation of black interest clubs and professional groups.” (7)

The Ipsos Affluent Study also finds that stays in five-star accommodations, also over-indexes for affluent African Americans (AAAs).  First class travel also is more prevalent among AAAs. This aligns with the attitudinal statements relating to customer service outlined in “Shopping While Black”, with AAAs expecting personalized and superior service when they shop more than do their White counterparts. 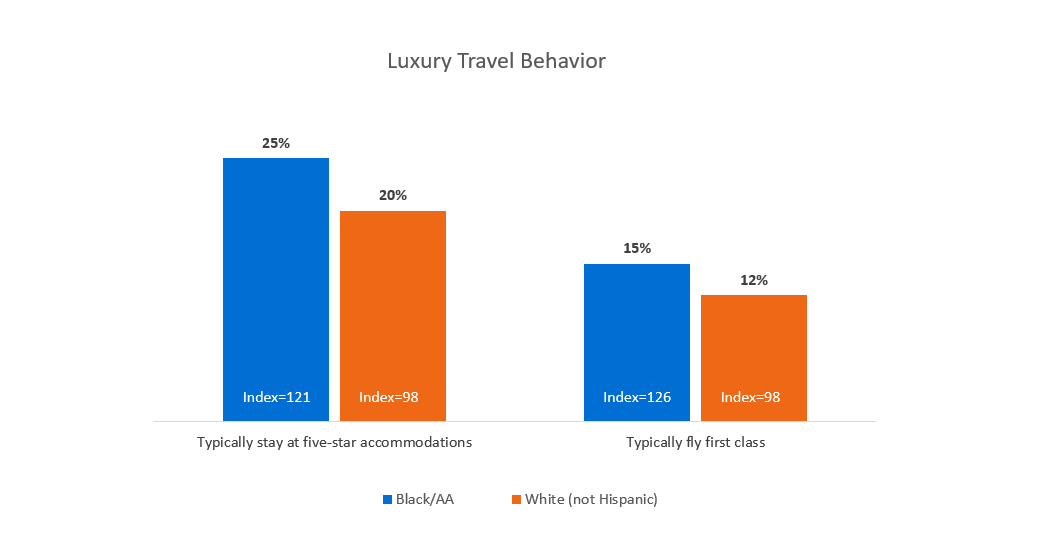 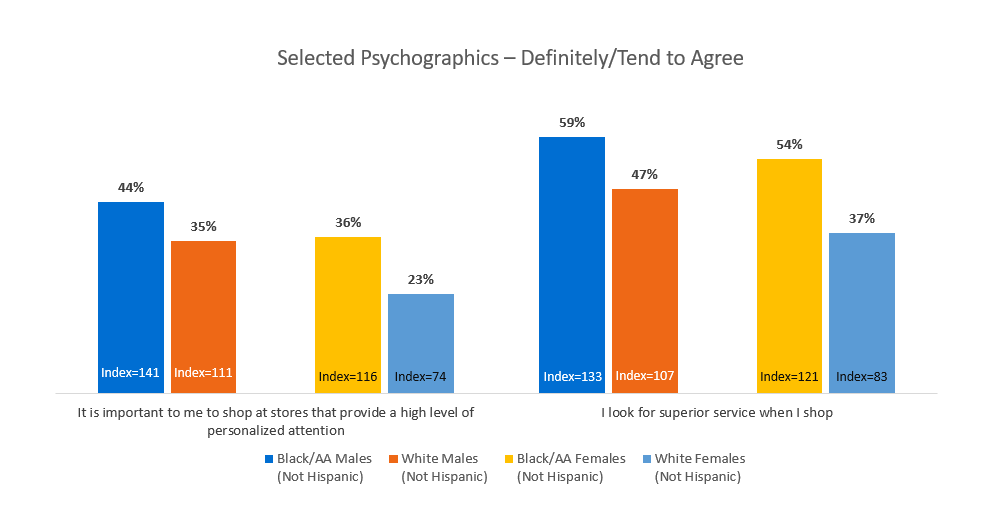 Yet, this consumer need for first-class, superior service while traveling among AAAs isn’t without challenge and limitations, due to intrinsic bias. The direct experience of some recent African American travelers exposes some of the limitations that come with this approach. As outlined in our previous piece on clothing and presentation, African Americans still negotiate primarily white spaces with limited credibility. (8)

Peter J. Bates, in his August 2020 Strategic Vision report highlights continuing issues of bias faced by affluent African American travelers.  His contributors note the apparent disconnect for those providing service between being Black and being affluent.  As an example, “People of color sometimes might be standing in line to board first class and the gate agent comes up to say, ‘You realize this is for first class, right?’ The assumption is that because you are Black you can’t afford a first-class ticket” (9) Another recalls similar treatment in luxury hotels, “For me, it’s the microaggressions that bother me the most.  Staff may not even realize they do it: They see me coming in, I ask a question, but then someone white comes along, and suddenly they don’t have time to deal with me. It just makes me feel dismissed, as though I’m not really wanted – even when I’m spending tons of money at a luxury resort.” (10) 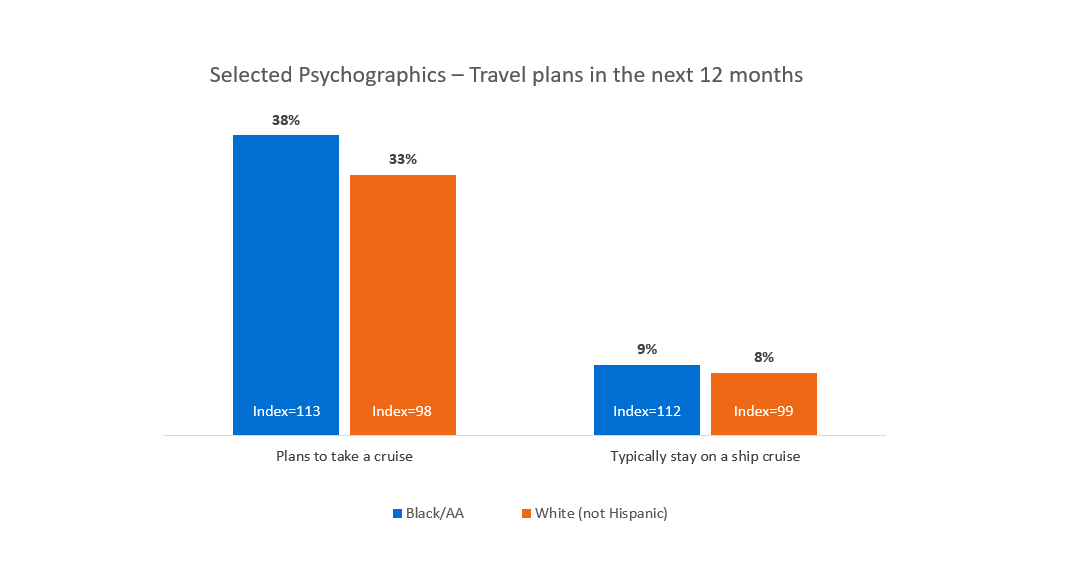 A 2019 article from Cruise Critic notes the tendency among African Americans to be repeat cruisers. (11) Within the cruise ecosystem, and closely aligned with group travel is the “Black cruise”. The appeal is, “You’ll find all of the things people love about traditional cruising on an African-American cruise, but the difference is that American black vernacular and culture aren’t limited to side chatter.  On a Black cruise they take center stage.” (12) As with the online travel networks, Black cruises are arranged outside of the traditional funnel.  They are not sponsored by the cruise lines. Instead, they are cruise charters either taking over a whole ship or groups on regular sailings. (13)

All of the behaviors and attitudinal preferences listed above suggest a desire for a more controlled travel environment. Affluent African Americans use the ability to pay, and more importantly, group travel as insulators to help ensure a positive travel experience.

An added layer of protection in affluent African American travel decisions, on top of group travel and ability to pay, is word of mouth and its more institutionalized successors in print and in social media.  A prime example of the transition of word of mouth into print is “The Negro Motorist Green Book”.  “The Green Book”, as it was commonly known, was created by Victor Hugo Green, a New York City mail carrier who used a national network of influencers: Black mail carriers, to provide crucial information for the African American traveler.  It was published from 1936 through 1966, and through an arrangement with the Standard Oil Company, was sold at ESSO stations throughout the country. (14) The Green Book catalogued hotels, restaurants, and other public accommodations, and so much more by state and the towns within them in alphabetical order. It also included advertisements and articles on points of interest.  The introduction to the 1949 edition stated its mission:

“…it has been our idea to give the Negro traveler information that will keep him from running into difficulties, embarrassments and to make his trip more enjoyable.” (15)

and hopes for its own demise:

“There will be a day sometime in the near future when this guide will not have to be published.  That is when we as a race will have equal opportunities and privileges in the United States. It will be a great day for us to suspend this publication for then we can go wherever we please, and without embarrassment.” (16)

Despite the federal legislation as part of the Civil Rights Act of 1964 prohibiting discrimination in public accommodation, and the subsequent demise of the Green Book, African American travelers still are searching for Green’s “great day”.

How does this provisional status impact present-day travel decisions? A search of the virtual landscape reveals that the decision-making process still relies heavily on word of mouth and race-specific guides; but now word of mouth consists of influencers in the form of bloggers, Facebook groups, race-specific travel clubs/guides on the internet.  With affluent African American travelers more likely to travel in groups to mitigate some of the slights experienced when traveling alone or as the “one and onlys”; there is an increased reliance on intermediaries, both actual and virtual, who can provide a curated experience.

These 21st century successors to the social club and the Green Book are found in online Black travel groups.  These intermediaries are not a new phenomenon.  A New York Times article explored the growth of Black travel groups on social networks in 2015, making explicit the connection to past Black travel sources:

“They are carrying on a long tradition of travel media created by and for black consumers, from the ‘Negro Motorist Green Book’ which helped black vacationers find lodging during the years of segregation to the professional and fraternal organizations that book large group trips, to cultural sponsors like Essence, which draws thousands each year for its music festival.” (17)

The article features four of these networks: the Nomadness Travel Tribe, Black Adventuristas, Travel Noire and Soul Society.  All promise to deliver an insulated experience geared toward the particular hurdles faced traveling while Black.

Affluent African American travelers comprise a thriving sector of the travel economy that exists outside of the mainstream channels, with behaviors that are deeply rooted in the African American experience and tradition. In all transparency, this insulated sector protects the Black traveler from the slights of the white world while recognizing the inclusive and enriching qualities that come from group travel with people of the same background.  This race-specific ecosystem needs to be understood by researchers and marketers alike.  Here are some suggestions:

There is much more travel data available in the Ipsos Affluent Survey USA that pertains to affluent African American travel behavior, as well as other audiences of interest.  Destination preferences by race and gender and generations within race are all issues we will be looking into more closely.  We will be further presenting additional insights and content diving deeper into the behavior of the affluent African Americans in the months ahead.

For any questions about this piece or any additional insights on African American audiences, contact Kip Davis ([email protected])